Setting out for new shores

5 / 5 - legendary
➤ "A Symphonic Metal album as if from one cast ... impressive in every respect ... overwhelms with sophisticated and precise songwriting, an enormous vocal variety and instrumental bombast ... metal and classical music form an impressive symbiosis here ... every song shows thoughtful arrangements and convinces with its individual melodicism."
(Deep Ground)

4,5 / 5
➤ "… decidedly enjoyable thanks to the enviable combination of the three voices, two female and one male, which deftly range between parts set toward the lyrical and others sung normally … their Symphonic Metal is magniloquent, theatrical and epic, a sort of cross between the atmospheres of Therion and the brilliance of Rhapsody … very high level, in every respect … certainly stands as a candidate to be remembered as one of the best Symphonic Metal releases of the year …"
(All Around Metal)

90 / 100
➤ "There is no other band out there quite like IMPERIAL AGE … an epic, massive yet also beautiful fusion of Heavy Metal and bombastic Wagnerian classical music with catchy melodies that just instantly stick in your head, chugging riffs that will send you into a headbanging frenzy and a combination of male, female, Rock, operatic, choral and folky vocals will leave you breathless and in awe of the talent on display in this insanely excellent musical landscape of colossal proportions."
(Darkzen Dragon)

8,9 / 10
➤ "… heavily influenced by Therion 's tremendous symphonic pomposity … I'm sure the good 'Rock 'n' Rolf' Kasparek would be proud of these guys … a victory … proof that every effort is rewarded …"
(The Dark Melody)

16 / 20
➤ "… the symphonic side is used here in a much more theatrical way than as a simple accompaniment … it's easy to understand why IMPERIAL AGE caught the attention of Christofer Johnsson as there are so many similarities between them and Therion, both in the vocal performances, typical of opera, and in the tragic and dramatic side of the music … I was pleasantly surprised … could allow the band to rise to the first rank of Symphonic Metal bands …"
(French Metal)

8 / 10
➤ "… melodic-bombastic Symphonic Metal ... accurately performed ... especially the three voices of the band are convincing: Alexander Osipov (tenor) as well as Jane 'Corn' Odintsova (mezzo-soprano) and Anna 'KiaRa' Moiseeva (soprano). The interplay of the vocal section is quite impressive."
(Metal DE)

Recommendation!
➤ "... quite a bit offered for fans of Symphonic Metal ... varied ... a few surprises ... a lot of heart and soul ... really big with orchestra ... a lot of Metal ... especially the fat choirs give the music something epic ... partly reminiscent of typical Female Gothic/Symphonic Metal bands like Nightwish, Delain, etc., but also of early Therion works ..."
(Amboss)

➤ "… like a Metal opera … if you're a Symphonic Metal fan, you'll definitely, definitely going to love this album …"
(Metal Shop Steve)

➤ "... offers everything you expected and hoped for from Imperial Age ... epic, bombastic, polyphonic, super harmonizing parts ... solo parts, which put the individual voices in a classy way and really cool duets ..."
(Dark-Art)

➤ "... for Symphonic Metal fans this album is a real recommendation, because here you can find everything that makes this genre ... catchy music, melodious vocals and a lot of epic background create a comfortable feeling while listening ..."
(Metalmamas Neuigkeiten) 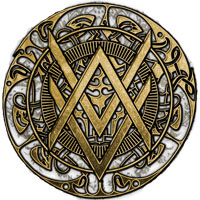 If you are one of the more than 51,000 people from all over the world who witnessed IMPERIAL AGE's online concert "Live New World" with choir and orchestra on Boxing Day, December 26, 2021, where old hits and the entire new and 3rd album "New World" were presented, you know what this is all about and are probably already looking forward to experiencing this unique spectacle again: 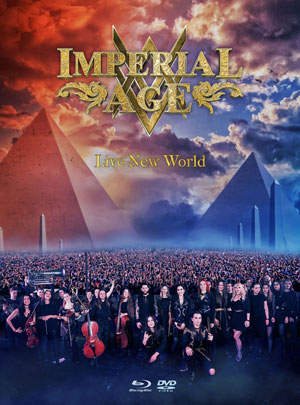 
The concert was broadcast 100 % live on YouTube and Facebook (no recording) and watched by 51,000 people from all over the world, who raised $21,000 in donations during the livestream. Between songs, the band answered questions fans asked in chat - in real time.

Filmed by 9 full HD cameras and recorded on 96 channels by 3 sound engineers, with perfect sound, stadium-quality stage decorations and light installations, the "Live New World" concert became a unique event and a benchmark for live online shows in Metal for bands of all sizes around the world.

For IMPERIAL AGE - one of the most successful Metal bands of Russian origin in history - the concert was also a farewell performance in their homeland:
after Russia attacked Ukraine, the band released an anti-war manifesto, after which masterminds Alexander 'Aor' Osipov und Jane Odintsova left the country.

To commemorate this great event, the entire live concert will be released in several physical formats:
Blu-ray and DVD box, Mediabook with extended booklet, double audio CD and others. The packages also include T-shirts, posters, souvenir laminates and tickets.

Blu-ray and DVD also contain all the questions and answers - compiled in a separate bonus video at the end.

The Live New World video will not be available in full online - only on the physical releases.

Bulletpoints:
• 3rd album of the Symphonic Metal aesthetes
• One of the most courageous releases of the genre
• Overwhelming songs cast by fate in uplifting forms

IMPERIAL AGE is one of the most successful international bands of Russian origin, which today has a multinational lineup and is based in Antalya, Turkey.

After turning down several record deals, they work independently and maintain a close relationship with their large worldwide fan base.

"New World" is the third album by IMPERIAL AGE - following "The Legacy Of Atlantis" (2018) and "Turn The Sun Off!" (2012). The new album "New World" will be released via their own London-based label Atlantean Records ltd. 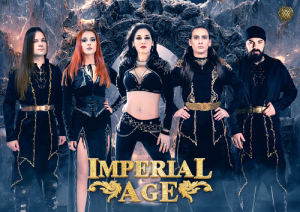 
IMPERIAL AGE, one of the most successful Metal bands of Russian origin is back against all odds!

Four years after the massive success of "Legacy Of Atlantis", which sold thousands of copies, reached millions of streams and YouTube views and helped the formation to international fame, the multinational Symphonic/Power Metal sextet is back with its new opus magnum - "New World". 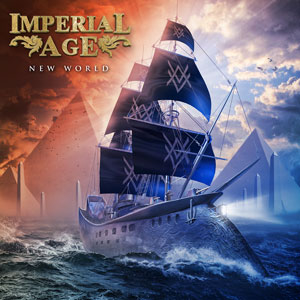 
This new album proved to be magical in every way:
During the crowdfunding campaign, which raised 188 % of the original amount needed, the musicians were hit by a tornado, unprecedented in the area, which chopped down a third of the forest where they were camping and writing songs, and completely destroyed their camp - though the musicians were hugely lucky that they themselves and all their equipment miraculously remained unscathed.

The choir's preparations were so intense that the choir's director and conductor, Taras Yasenkov, had to be taken by ambulance to a psychiatric hospital in the middle of the recording sessions, where he suffered a nervous breakdown - he has since fully recovered.

When the album was almost finished, the whole band laid down with Covid, and as if that wasn't enough - a month later Russia attacked Ukraine and sent all plans to hell - forcing IMPERIAL AGE's masterminds Alexander 'Aor' Osipov and Jane Odintsova to leave the country in a hurry after the band released an anti-war manifesto - interrupting the whole process of album production and release ... 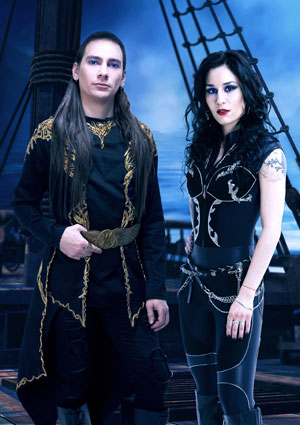 
The lyrics of the third long player turned out to be frighteningly prophetic:
They deal with the quest for freedom and independence, the horrors of war, leaving home with no hope of return, and traveling through rough seas to distant shores - all the lyrics were written many months before all these topics became a grim everyday reality for the band.

As with most great things that involve a huge amount of super compressed energy, every step of the production of this album was achieved through a great effort by all involved:
composing the songs over many hours without food or sleep, long nights in the studio until sunrise, recording live orchestral instruments and choirs, countless rehearsals, hours and days of painting artwork, and many, many other things ...

... but the musical end result sounds and ultimately feels the other way around:
upbeat, uplifting and powerful. It seemed as if IMPERIAL AGE were at the end, especially when Max Talion (drums) and Paul Maryashin (guitar) left the band. 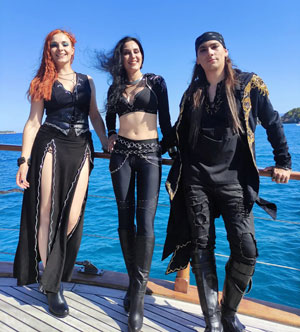 
But against all odds, the band regrouped, resettled and survived - even reaching new heights:
not only did they record what was missing, hire new musicians (Manuele di Ascenzo from Italy on drums and Kublai Kapsalis from Turkey on guitar), move their entire web store to Italy, release three singles and two music videos, land a headlining European tour for September 2022 - but they also donated a portion of the proceeds to needy Ukrainian families, despite being immigrants themselves.
All this - because of and with great support from their immense worldwide army of ultra-loyal fans, who continue to support IMPERIAL AGE with thousands of album purchases, millions of streams and hundreds of donations.

The result - albeit 3 months late - bristles with IMPERIAL AGE's trademark powerful, uplifting, visionary Metal with orchestra, choir and 3 lead singers - and yet the band has recorded their happiest, heaviest and most adventurous album yet! 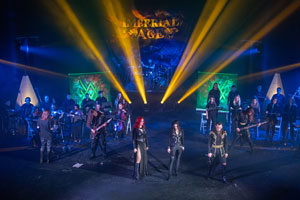 
Every single song on this album is a hit, and there are simply no 'B-sides' or weak tracks. "Legend Of The Free" is one of the fastest and most upbeat Power/Folk Metal hits in the group's latest collection, with strong lyrics about the pursuit of freedom, while the philosophical "The Way Is The Aim" is a dance song about finding your own way, with Jane Odintsova switching from operatic to rock vocals.

The murderous, lyrically somber anti-war anthem "The Wheel" is a must for all future live sets with its fast beat, catchy chorus and Aor's high-pitched vocals, while "Shackles Of Gold" immediately conjures up the image of pirates of the Caribbean wreaking havoc on Tortuga in the name of freedom.

Now you might think that 8 tracks are not much - but not in this case. The crown jewel of this album is the epic, dark, immensely powerful and colossal Metal symphony "Call Of The Towers", which despite its whopping 18+ minute playing time manages to hold the listener's attention by constantly shifting from an explosive Hollywood-style wall of sound, that pushes every instrument and vocalist to their limits, to acoustic tavern ballads, Bachian organ solos, and even 3 minutes of pure Sympho Black Metal with atonal chords, and a deeply somber atmosphere where male, female, and choral vocals constantly alternate.

All songs are sung by the three lead singers Aor, Jane Odintsova and Anna Kiara - plus a full academic choir as well as live orchestral instruments. "New World" overwhelms the listener with polished and precise songwriting, highest musical level, enormous variety of vocals and instruments - all this paired with the heaviest Metal sound IMPERIAL AGE have delivered so far - and the new work proves once again why IMPERIAL AGE are so successful, although so many circumstances speak against them and they don't even have a record company behind them!