➤ "… I love it … very reminiscent of the ‘Classic’ era of Rock with a slight modern day feel which is really bringing the best of both worlds together … singer Joe Hanson is an absolute beast with his craft. I can feel every note, every vocal cord, every octave he uses I can feel it in my bones! His melody is comparable to the boys back in the day such as David Lee Roth, Ian Gillian, Bret Michaels and more … no wonder why this track is so smooth, heartfelt and yet bitchin' at the same time. Faithful nod to the golden era and a catchy, groovy track all same … has everything you could ever want from a Rock song!"
(Asphyxium Zine)

Bulletpoints:
• New top single of the superb Heavy Rockers
• Outstanding musicianship with all-round class
• A song that inevitably goes immediately into the ear

IMPACT announce on "Hometown":
"'Hometown' is the epitome of a blues-inspired, future Hard Rock classic. A killer riff leads into the song, which tells a story about a love affair and a hate relationship. The protagonist longs to leave his dreary and boring hometown to travel the world and its seven seas, but is still deeply rooted in his birthplace. Big 80's Rock drums, a Mutt Lange vocal production and hard-hitting guitars are the ingredients for an anthem for travellers, assuring them that there will always be a place called 'home.'" 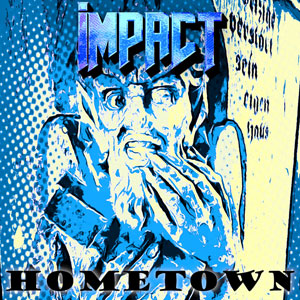 
With the new single "Hometown" these hungry top artists deliver crisp and fatally catchy HEAVY ROCK at its best! 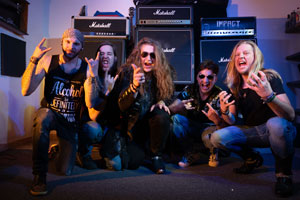 FLASHBACK:
IMPACT is a traditional Heavy Metal line-up formed in early 2020 by drummer Ian Hendrik, Morris Ramon and Danny F. on guitars and bassist Dan Ringer. With thundering drums, in- your-face guitars and screaming vocals they reignite the sound of 80s Heavy Metal. In their own songs influenced by bands from the Monsters Of Rock time like Metallica and Judas Priest they critically review the society, scream for freedom and talk about the cliché trio: Sex, Drugs and Rock'n'Roll.

After their founding in February 2020 the band put out their first single called "We Want Out" in August of 2020. The song was written by guitarist Danny and Drummer Ian Hendrik who also took in the place of lead singer for that particular release as the band was still looking for a lead singer back then. The according music video gained international success and critically reviews the decisions made by the government regarding the Covid-19 pandemic.

Due to the Covid-19 restrictions the band only managed to play one live show in summer of 2020. Fronting the band at this very show was guest singer Joe Hanson who had been in the local rock scene for quite some years. As the concert with Joe Hanson was just a one-off at this point the band started to actively look for a lead singer.

IMPACT sorted that position with Markus Winkler in September 2020 and started writing songs for their first album. The head role in the process of writing was taken by guitarist Morris Ramon and Drummer and producer Ian Hendrik who knew each other from a previous band project. They equally contributed to writing the music, however Ian Hendrik took the main part in writing lyrics. Danny and Dan Ringer also put their own unique style to the songs which makes up the instrumental section of Impact. Over time it became clear that Markus had a great voice but wasn't the sort of Heavy Metal Singer the band was looking for.

Although the band was now without a singer they started to record the first studio album in January of 2021 at Savage Sound in Bavaria, Germany. About six weeks into the recording process and most of the basic tracks done the band figured why not ask their good friend Joe Hanson to exclusively sing on the album. As it has always been a dream for Joe Hanson to sometime record an album featuring himself on vocals he quickly decided to take the job.

After all the drums were hammered in, Dan Ringer finished to shake the ground with his thundering bass, Danny nailed all the rhythm guitar parts, Morris Ramon made poetry out of every note in his solos and Joe Hanson had his last scream the album was mixed by Ian Hendrik who happens to be a Music Production student in London. After all the recordings sounded the way the band imagined them, they had a very last listen before sending them off to mastering. In that very listening session Joe Hanson asked the band if the offer to join the band as a full member still existed. From that point on the band had finally sorted their full lineup. The tracks were then sent off to Metropolis Studios in London where they had been mastered by none other than legendary mastering engineer Andy 'Hippy' Baldwin who already put his magic touch on bands like The Who, Oasis and Faith No More.

When the band got back the final masters they were all simply blown away by the sheer power. They started promoting the album which was going to be released on the 9th of July 2021 and was going to be called INITIAL IMPACT. On June 25th, in advance to the album, the band released the single "Faster'n'Higher" which gave the world of Rock and Metal the first glimpse of what can now be heard on INITIAL IMPACT. The song was immediately featured in a British newcomer radio show by Martin Jones the week after. The according music video quickly gained over 2.000 views in just under three weeks. With the backup of that ongoing success the band finally released their first full studio album on Friday the 9th of July 2021 at 6pm CET. A release party was held at the bands local pub called "Kings Road Pub" and they were all simply blown away by the amount of people that turned up. IMPACT managed to pay off all the CDs they ordered in one single day. Since the album was released the band kept promoting their debut long player and managed to get over 5.000 streams in just over 10 days, from 1.500 listeners in over 50 countries on Spotify alone.

One week later on Friday, July the 16th the band released their second music video supporting the album for the song "Voices Of The Night". The song features UK rock veteran Dale Radcliffe from the power formation COP UK (Crimes Of Passion) on lead vocals. He immediately joined the project after Ian Hendrik asked him back in May 2021 as he had met him in a beer garden in Germany a few years back where he mistakenly thought Dale was also a fan attending the concert in town.

However, the band managed to play their headline stage debut on September the 25th, 2021 in front of their hometown crowd and their beloved pub. The concert was planned very spontaneously, so the band was worried about playing in front of cockroaches only, but the concert became to be a full success. Around 550 people showed up for their first show. With the massive support from fans all around the world the band went straight back to writing new material and released their follow-up single "All In" on December the 17th, 2021.

As due to the government regulations to control the outspread of Covid-19, it was still impossible to play gigs, so once again the band got back to writing. The first result of that work is the song "Hometown" predominately written by drummer Ian Hendrik, in which he expresses his love- hate relationship with his hometown Dillingen. The song has been released as a single with a music video on Friday the 13th, 2022 at 6pm CET and offers the first chance to taste the power of the upcoming album, which the band is currently working on.

With the regulations easing of as well, IMPACT is back to playing live on a regular basis and played their first show in 2022 at the Phoenix in Schwäbisch Gmünd, Germany. Parallel to playing gigs every weekend the writing process for the new album is almost completed and recordings are planned to start in May 2022. A name for the album or a release date hasn't been found yet.

IMPACT are available for interviews via phone, Skype, Zoom & email