Towards the madness of the world

8 / 10
➤ "... are fit on their instruments ... technically skilled ... I hope that EUFOBIA will get a bit more recognition beyond their national borders, because they can easily keep up with today's big bands! The potential is definitely there."
(Crossfire)

7 / 10
➤ "… violent double-time beats and punk basslines … remind you of the urgency of Sepultura’s 'Chaos A.D.' … contains no shortage of extravagant guitar riffs … maybe that’s why this album is so listenable … thrive on a spirit reminiscent of Kreator and a technical proficiency that Megadeth and Metallica fans will admire …"
(Scream Blast Repeat)

➤ "... the ten songs sound varied and skillfully manage to combine harmony and chaos, rhythmic and well composed ... I was overwhelmed on first listen by this mix of styles and influences woven in from all over ... EUFOBIA does not leave us on the surface of uniformity and familiarity ..."
(Metal Hangar 18) 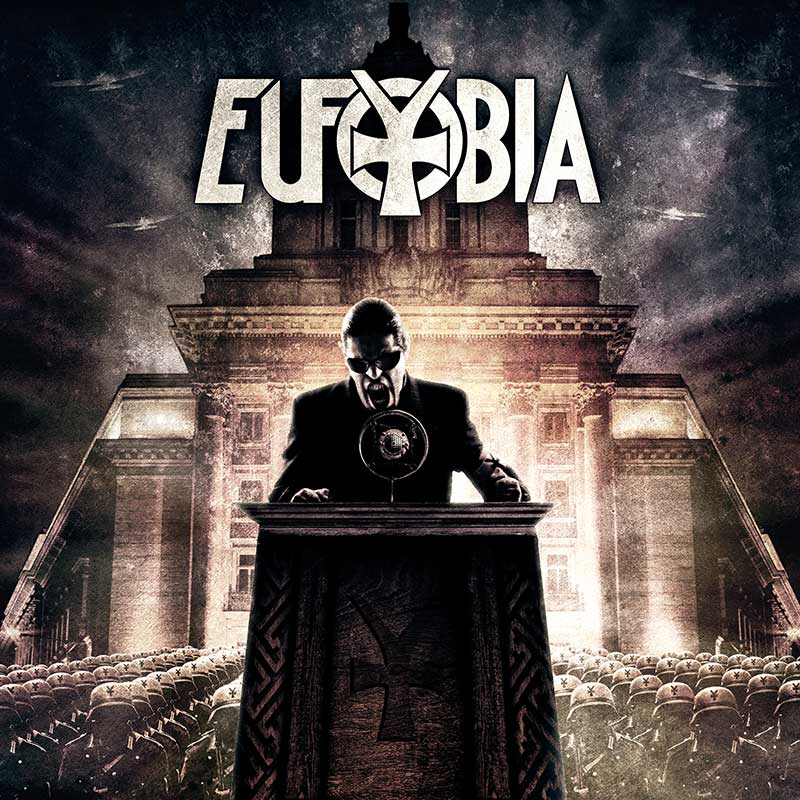 96 / 100
"… full of energy and arrangements that stick to our ears, but always with a very well made melodic aesthetic, while still sounding aggressive and shocking … EUFOBIA is an excellent name, which deserves to be better known to all, just as 'Eufobia' deserves applause."
(Heavy Metal Thunder Brasil)


9 / 10
"… a band, which with all its maturity, has mixed a diversity of influences and shaped them with an identity of their own. The end result is thirty minutes of an exceptional and addictive album."
(Metal Na Lata)

8,5 / 10
"… good and technical music to listen to, where tracks like 'Graveyard', 'Hater', 'Liquid Of Creation', 'Fat Sack Of Shit', 'Lust' and 'Tears Of Defloration' are the big highlights. Without a doubt 'Eufobia' is the most versatile and polished album of this Bulgarian group, merit of the great current and natural production … can please a lot of Metal fans in general!"
(Portal Do Inferno)

8,5 / 10
"… Extreme Metal, as the main focus lies in Death Metal, however the music found here will not sound so familiar to the 'deathbangers' … after all, there are elements of Thrash and Rock'n'Roll, and even progressive lines in the sound of the EUFOBIA."
(Arte Metal)

80 / 10
"… remarkable performance … wonderful album … lively and aggressive, created with so much passion and intelligence … reinvent the fate of the Extreme Metal … does not stand only on sound violence, on the double stuffy chest or a guttural voice … speaks of new Death Metal in a serious and credible manner, jumping all the possible labels of the genre … evolved, ingenious work projected into the future that will satisfy the needs of everyone, even those of the most intransigent. Stellar album!"
(The Pit Of The Damned)

8 / 10
"On vocal level, 'Eufobia' is the most varied and intriguing album I've ever heard … successful mixture of partially dreamlike melodies and a healthy aggressive tone …"
(Metal Division)

8 / 10
"… music is not simply and raw Death Metal too. The degree of twisting sound grows here as listening … the deposited Death Metal spine is more psychedelic and progressive but has also elements of Thrash … from time to time EUFOBIA interjects a bit of melody, which emphasizes good fast pace and complex sound. Bulgaria still remains a largely 'terra incognita' when it comes to Metal, the more we reach this truly worthy album …"
(Pest)

"… thirty minutes of a devastatingly savage and brutal mix of Thrash and Death Metal, invoking violent head banging wherever it is played."
(Frenzy Fire)

"… short, interesting songs rather than solo-filled wankfests. If you like that sweet spot combining early nineties Death, Thrash, and Progressive Metal, give these guys a real shot."
(Core Of Destruction)

"… a delight for musicians to work on their own rules without respecting modern trends."
(Metal World)

"… the tracks just have this source of rhythm going, it's fast paced, edgy yet energy driven through and through … vivid and fluid, almost running on an unstoppable flow of motion … a nice tight package that sounds fierce yet extensive … a solid piece of work, that will likely continue to develop as the band progresses and grows together as musicians."
(Natalie's World)

"… hammer sound with melodic Thrash and Death Metal elements ... uncompromising and brutal ... before the next moment a catchy melody line in the auditory canal flatters ... at EUFOBIA there is pure variety ... you have to highlight singer Niki, who comes across very convincingly with his versatile voice and really in every song."
(BlattTurbo)


Mighty and threatening thunders from the Bulgarian capital Sofia ... fatal cause:
EUFOBIA hail with their important third studio album brute and martial in the ears! This extremely determined disc is clearly created with gallons of the most rebellious heart and with immense compositional joy. And you can clearly hear the massive further development of the THRASH DEATH METAL troupe. 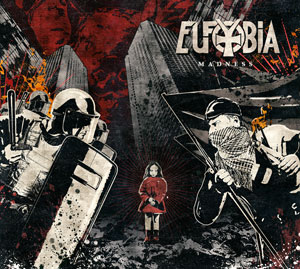 Outstanding specialty of the much-cursing death horde in all their new creations: brutally aggressive, technically adept and really fat guitar assaults! Heaps of razor-sharp riff canonades are to be experienced, which not infrequently ignite as quickly as a giant tank filled to the brim with fresh kerosene.

And also with their capably handled lead axe, EUFOBIA conjure wonderfully massive earworm moments out of the boxes again and again. Remarkably fit in instrumental interplay, noticeably skilled in the passes and with gigantic enthusiasm at the start, the flaming world critic quartet stands out from many competitors with its new furious output. 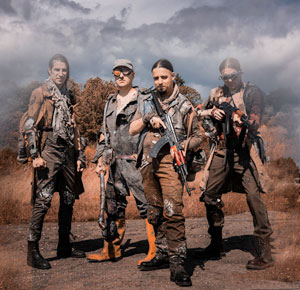 Performing with martial and at all times confidently hewn rhythmic earthquakes, the truly bone-crunching and edgy drum work on this superbly crafted release is by no means left behind either: for the drumsticks of the fierce rhythm kettle-keeper Blago hammer on his cauldrons as fast and nimbly as gigantic, ultra-heavy demolition hammers.

In addition, the sinister Balkan flails fire razor-sharp words in the most authentic and truthful way on their new output with welcome provocations:
biting lyrics straight from the dirty and dusty street. Singer and guitar monster Niki doesn't give a damn about compromises in content and fights on "Madness" with incredibly effective and uncompromising throat attacks.

With "Madness" EUFOBIA show the worldwide rest of the scene that even nowadays it is still efficiently possible to hammer acutely into the epicenter of the Death Metal profession with a lot of self-confidence and burning fervor. (Markus Eck)


EUFOBIA has produced a new music video for the title song "Madness", which is the first single of their third album. The video was created by Val Volegna of 12 Drops Design. The lead role is played by the Bulgarian model Maria Georgieva. The story of the video is about a group of survivors in a world, which has been destroyed by a nuclear war, who try to save a girl trapped in a radioactively contaminated area: 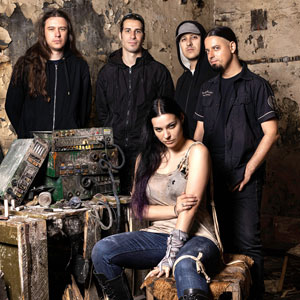 
FLASHBACK:
The memorable band name of these Bulgarian THRASH DEATH METAL command is of ancient Greek origin and literally means 'fear of good'.

EUFOBIA was founded 2003 and no band member has ever been replaced since, which is pretty rare to find nowadays. 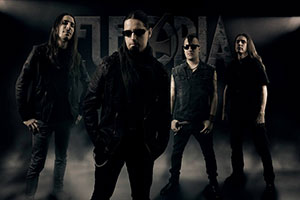 These musicians are in any case a very own formation. The emphasized independent, intense sound of EUFOBIA is just as individual as interesting structured and full of variety, even in the abysmal, manic emotional passages. Every song by the guys therefore can stand completely for itself.

During the summer 2018, EUFOBIA worked on the music video for the song "Cyber Pervert", which is presented the world since September 17th 2018. The title is so self-explanatory that nothing needs to be explained about the lyrical, socio-critical content.

Besides, the members also diligently write new songs for the fourth album, which is expected to appear between spring and summer of 2019. 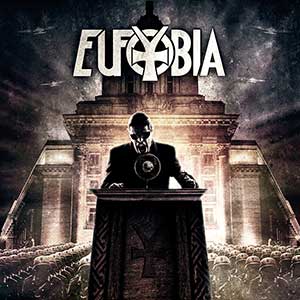 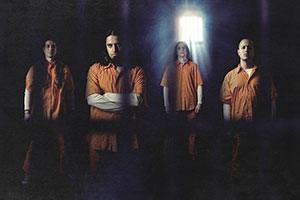 In October 2017 the musically and lyrically hard biting genre-hopefuls from the city of Sofia published their music video for the song "Graveyard":

"Graveyard" is taken out of their third, self-titled album "Eufobia", which has been published in November 2016.

For this successful longplayer, the Bulgarian idealists were able to bring in a lot of sympathetically affirming to fully encouraging and enthusiastic press reviews.

EUFOBIA are available for interviews via phone, Skype, Zoom & email