Heavy Metal, straight from the pot!

9 / 10
➤ "... has it mighty in itself ... melodic, classic heavy metal, down-to-earth and full of playing joy ... the straightforwardness stands out positively ... this kind of heavy metal is simply - simply ingenious ... additional or even superfluous gimmicks do not exist here ... a solid, melodious three-quarters of an hour of music at its best ... covers pretty much everything that makes the heart of every metal fan beat faster ..."
(Bleeding4Metal)

8 / 10
➤ "The production is charmingly earthy and conveys a certain live feeling, because it doesn't come out of the speakers perfect and flawless, but has rough edges ... inevitably parallels to the early works of Stormwitch, Iron Maiden, Running Wild and Grave Digger come up, although Sven Biwo sings much more melodically than Rolf Kasparek or Chris Boltendahl .... an extremely likeable Heavy Metal debut, which will be played more often thanks to great melodies, a knack for cool compositions and a certain glow of nostalgia."
(Powermetal DE)

7,5 / 10
➤ "... simplistic, but effective ... the crunchy riffs work ... the vocals are melodic, if not virtuosic, but honest ... the attitude is right, and the spirit is there ... I feel reminded of GAMA bands from the eighties, like Noisehunter, Veto, Renegade and so on, but also of Power Metal bands like Wizard or the German Majesty ... if you like old German underground Metal with a slight tendency towards Power Metal, you will like BIWO."
(Crossfire)

7 / 10
➤ "... the vocals are pretty heavily layered, allowing for a faster lyrical delivery and some harmonized vocals in some areas ... the lead guitar work is pretty nice ... unpolished feel ... a good album ... the overall effect works ... there's a lot of promise for the future if they decide to keep this as a main project ..."
(Metal Temple)

➤ "… an album with great musical ideas … when I listen to a track as 'Mother Earth' my mind flies away back to the 1980’s to the first Metal albums that I have listened to … the way the guitars are played address too much there. It’s possible to feel that feeling and heart are far beyond technique … guitar phrases are simple, but very effective and melodic … what I liked the most about 'Life And Death' is the nostalgia it brings and how it connects to the fresh sonancy BIWO deliver … I caught myself flying away with 'I' just remembering old songs I used to hear in my teens … has this incredible power of making us fly away with great joy …"
(Metal Addicts)

➤ "… an instant melodic Heavy Metal classic! … sets the tone perfectly … the song is about not letting people hold you down, and doing what you feel like doing today … fans of old school Metal are gonna love this … and how about that hook in the chorus? … fantastic solo, too … positive message … great …"
(Wanna Hear A Great Song Today?)

➤ "… a very energetic start … the evolution of Heavy Metal during the eighties was a magical time … a time that will never be repeated … when the likes of Iron Maiden, Judas Priest, and Saxon were shaping the sound of Heavy Metal - for the likes of BIWO to follow … a gear changing gallop of glorious Metal … hundred percent head bang-able, the mosh pits of the world are gonna love this one … a hard hitting journey of traditional Heavy Metal, featuring the classic sound of the iconic NWOBHM."
(Frenzy Fire Metal&Rock Reviews)

➤ "... committed to the classic melodic Heavy Metal that has its roots in the 1980s, and firmly believes in these values ... full of energy, gets to the point, with effective riffs, simple structure, guitar solos ... a good debut album, with a straightforward sound and without too much retouching, that focuses on variety without going out of line, and that shows a personality ..."
(The Murder Inn)

➤ "Right from the start it's a real rush! Fast playing, powerful guitar playing and fervent vocals ... the spirits are awakened ... plenty of imaginative guitar playing which is also given solo parts in many tracks ... even if they primarily follow the path of Oldschool Heavy Metal, the individual tracks do not come across as old-fashioned at all ..."
(Metalmamas Neuigkeiten)

Bulletpoints:
• Refreshing debut album of a true idealist
• Straightforward, 100 % honest & all around spirited
• Timeless-classic Heavy Metal of the old school


Mastermind Sven Biwo explains "Live Now":
"There are enough assholes in the world - people who want to pull you down. We invite you to forget all that shit for a moment. Live now - and do what you feel like doing! Because tomorrow might be too late. Don't waste your time with negative stuff - grab a beer, raise your fist and shout it out loud!"


It is clear to hear that here is a musically thoroughly inspired genre fan ambitious at the start, who makes his real music for just such real fans - uncomplicated Heavy Metal brotherhood is there so very heavy! 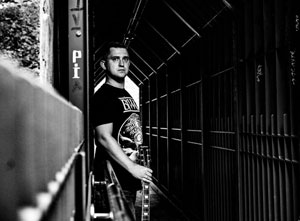 The enormously varied and sustainably catchy songs breathe the unique, unused 80s spirit with delicious fervor and in such depth that you simply cannot escape the charm of BIWO if you feel sincerely connected to the early Heavy Metal from that time.
Yes, we mean the very special time when the blessed and equally obscure GAMA Records released unforgettable records by top artists like Stormwitch, Veto and Tyran' Pace - and the scene cult around it grows with every year.

And although bandleader Sven sees himself more as a soloing mainman with guest musicians, the result sounds damn organic, homogeneous and completely free of wear and tear. All songs on "Life And Death" were composed and recorded by Sven Biwo single-handedly. The mix and mastering were also done by master Biwo at Cubi Studios Bochum. The pleasantly idiosyncratic artwork is deliberately not an obligatory Photoshop bombardment - it comes from the brushes of Gudrun Müller. 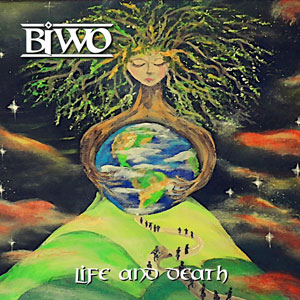 The idea for the band was born in January 2020 when Sven (guitar and vocals) and Justus (bass) met at a benefit concert. With Hanno (drums), whom Justus knew from his school days, a man for the kettles was then also found.

Shortly before the first rehearsal the pandemic came and with it the break for the formation. However, Sven took advantage of the creative break and began to transform the ideas into songs and to realize a finished album. The final touches were put on "Life And Death" in the summer of 2022, when the first real rehearsals began and the tracks were given a new shine in the rehearsal room. (Markus Eck)

BIWO is available for interviews via phone, Skype, Zoom & email