Well known to friends and foes for making music more authentic and open-hearted than many of the peers in the Pirate Folk genre, these bullies have been creating their very own distinctive brand since 2008.

So the Swedes in the extraordinarily big line-up were able to hijack countless fan-hearts with their third album „First Night Back In Port“, published in summer.

Björn ‚Bellows‘ Malmros, engaged at these colorful bunch at accordion and vocal microphone, lets me share his personal year's flashback.

„2017 has been a great year for us as a band! We finally got to release our third album ‚First Night Back In Port‘, signed with Napalm Records, recorded two music videos, released a full live concert DVD on youtube, and have done quite a lot of touring in Sweden, Germany and the Netherlands. Busy, but great!“

Do you even care about ‚years' and the aging itself? 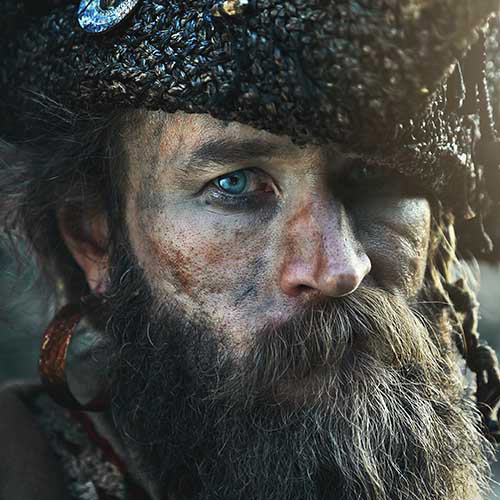 „Well, 2018 will mark the 10-year anniversary for this band, so its hard to ignore the fact that time flies really fast when you are doing something you like. We have come such a long way since the first rehearsals back in 2008, but still, it often feels like it was merely a year ago we took our first chords.“

„Oh yes! Every year that we don’t go bankrupt, and everyone is still alive is considered a massive success in this crew. Kind of like it might have been for the actual pirates of the 18th century I guess.“

Are you fully happy with all the fan feedback and world wide media results for „First Night Back In Port“?

„We are super happy! Even though our album has been reviewed as a Metal album, the majority of the album reviews we have seen have been really good, which makes us immensely happy and proud. We are not everyones cup of tea of course, but we really wouldn't want to be either. One guy really hated our guts, and made sure to make that known in every sentence he wrote. That was probably the most entertaining and memorable review of the year. When you manage to piss someone off like that, you now you have to be doing something right, and we did get quite a lot of perfect tens to prove it. The worst reviews are the ones where it seems like we have not been able to invoke any feelings at all in the author. Luckily, we didn’t have a lot of those. Otherwise, our 360° video of ‚First Night Back In Port‘ has received nothing but positive feedback, Annabel is chewing away with a steady flow of viewers every day and our fan-participated video of ‚We Are Ye Banished Privateers‘ is getting a lot of love and hype.“

Is the huge line-up still the same meanwhile?

„More or less. This year Sara and Emil have taken a step back to focus on their family, while Ina and Stina has joined our ranks on percussion and flute, but we still have 34 members on our rehearsal list, and to this date, only one person (Happy Tom back in 2010) has ever quit the band. So, I would say we are bigger and better than ever, haha!“

What was the greatest thing at all for you in 2017?

„I have to say the release of our album ‚First Night Back In Port‘. We have invested so much time and energy in that thing, and we postponed the release by almost a year in order to get it all right. So when we finally reached June 30th this summer, it was such a great feeling of deliverance.“ 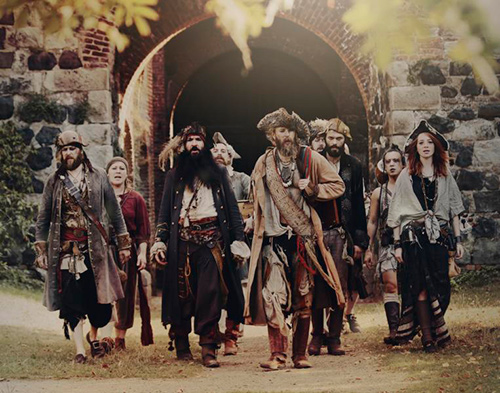 „To discover that D-minor is not the only musical key! Next year we are going to rock C-minor like it’s 1718!“

What was the most unexpected global surprise for you in 2017?

„Donald Trump taking office as president of the United States. How anyone can even consider to vote for that man to lead their country is a mystery.“

„Oh, we've had a good year, with only minor set backs like a broken sitar. Frida has had a tough time fighting a throat infection that got to her vocal chords, thus keeping her from singing as much as she would like. We had hoped to be able to do a short UK tour, but those plans sadly came to a halt when the promotor suddenly stopped answering our mails. I guess he got cold feet from doing the math on how much it would cost to keep the hole band hydrated on expensive UK beer for a week.“

Which were the very best gigs in this year for Ye Banished Privateers?

„We did an exclusive gig with our fanclub in Hamm, a week before the official release of the album. That was so much fun, with hundreds of crazy Libertalians in the audience. Coming back to Castlefest and seeing how the whole pirate scene is currently exploding in the Netherlands was also amazing. Feuertanz certainly didn't disappoint, and our gig at Wacken Winter Nights felt like one our best performances this year.“

Which band could inspire you the most in 2017?

„Seeing the well deserved success of our colleagues in Mr Hurley and how these guys manage to remain humble and true to themselves is of course very inspiring.“

Which movie could inspire you the most in 2017?

Where and how will you celebrate the New Year?

„As far away from each other as possible. New Year’s Eve is on a Sunday, and we always rehearse on Mondays, so we'll have to put up with each other soon enough anyway.“