Hailing from Northern Italy, and playing Metal already since 1988, this sensational bunch of musicians can easily be counted to the very best nowadays existing Epic Power Metal acts.

Their intoxicating melodic sound commemorates strongly about Manowar in their best creative times! After the demo releases „Thunderstorm” and „Under The Sign Of Odin’s Crows” Wotan now unleash their official debut album „Carmina Barbarica”.

Latest comes along as an awesome masterpiece of this genre and electrifies true fans of these kind of style immediately guaranteed. „Carmina Barbarica”, an absolute touching matter therefore, which gives one a great span of desires. I talk with Vanni, their vocalist.

Vanni, to my mind your new album is one of the very best classic Heavy Metal albums out of Italy, which has ever been released! Do you agree?

„Thanks a lot for your words of appreciation, Markus, but actually I don’t know what I can say to express an opinion about the CD. Of course I feel it as a good work, but I prefer to let the judgment to the metal fans, certainly your words are really welcome, I hope that many other people thinks like you.”

How are you guys doing these days? 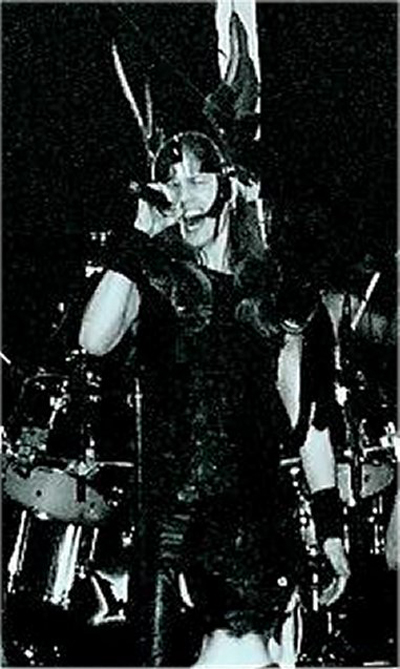 „We are preparing the show for the next live dates, especially our appearance at the Swordbrothers Festival in Andernach the 26th of February 2005.”

I saw a few live pics with the typical showed Nibelungen helmet etc. on your head – how looks an upcoming live show of Wotan?

„Every time the place and the distances allow it, we like to use a minimum of stage props: smoking stone idols, burning braziers, and of course swords and helmets. During the show I wear a costume inspired to the barbarians armours, made of leather scales or sometimes I wear a chain mail made by my own hands, because we like to create the right atmosphere, so the audience can live with us the tales about we sing.”

When Wotan has been founded and under which specific influences?

„Fundamentally Wotan as project born on the trail of early Manowar music, which I consider the best true Epic Metal band, for me „Into Glory Ride” and „Hail To England” are the pure essence of the epic Metal, two absolute masterworks. But we get inspiration also from Virgin Steele, Warlord and one of the best German Heavy Metal bands: Running Wild, and we cannot forget Heaven’s Gate.”

Due to which reasons do you guys using the band name Wotan?

„I was always fascinated by the Nordic and barbaric cultures, so I thought to take the name of the band from the northern Pantheon, Wotan is the father of the gods for many ancient peoples of north, as Saxon, Vandals , Longbards (all this people colonized Italy at the falling of the Roman Empire) but he is also the god of the of the battle fury, he gave to the warriors the ecstasy of battle, which the Romans called „furor teutonicus”. In fact the name Wotan take origin from the ancient Indo-European word „wut” that means Wrath.”

Are there any bands to mention as influences for your new songs?

„At the moment we take our inspiration more from the movie soundtracks or from medieval music, than from other metal bands.”

How would you describe your music to totally new listeners?

„I like to compare our music to the barbaric art, essential, sometime raw, but full of evocative energy, if you want to find great computer orchestrations or sampled cathedral choirs, Wotan’s music is not for you, instead, you are looking for a genuine Epic Metal with powerful guitar riffs, pounding drums but even some fast double bass tracks, „Carmina Barbarica” is for you.”

In which qualitative position between nowadays Heavy- and Power Metal acts do you see Wotan?

„In Greece and Germany the CD has released in June, in Italy in September, the things are moving just now, the press had published some interviews and reviews in these two months, so we have to wait to see the results to understand what is the position of the band in the Metal scene. I enough satisfy of „Carmina Barbarica“, but sincerely I would like some more gain on the bass frequencies of the final equalization, anyway our minds are oriented to do better the next album.”

How were the reactions and the media feedback for Wotan so far?

„The reaction of the press, till now has been really great! We had a lot of good reviews on the major Metal magazines and webzines with almost every time the maximum marks, they showed a great interest in „Carmina Barbarica”, several magazine writers put our CD in the best 15 albums of the years, Greece, Germany and Italy gave us the best responses, but we had some good articles also in South America and Canada, too. The thing that pleases me is that we did nothing to push the CD there was a great spontaneous interest by journalists and we are very grateful to this people. I think what the press appreciated of Wotan’s not for technical characteristics but for the genuine attitude and the feeling in every song.” 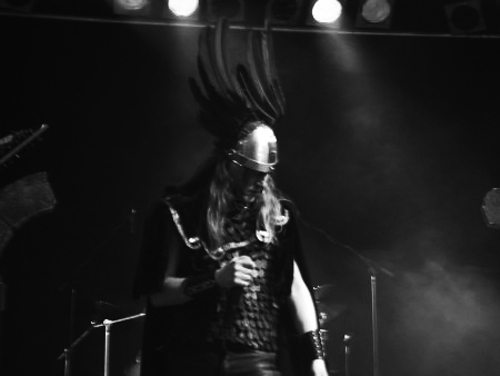 Vanni, your very remarkable heroic voice sounds partly quiet near to Manowar´s Eric Adams in his best early days. Do you agree?

„It’s the best compliment of my life! For me Eric Adams a mythological figure not a man, I think I have a lot of road to walk to reach his level of performance, but anyway thanks a lot!”

How much time has been taken the complete songwriting of the new album?

„The songs contained in „Carmina Barbarica” are written in a wide period of time that goes from the early 90’s till the year 2003, some songs are already recorded on the two previous demos, „Thunderstorm” and „Under The Sign Of Odin’s Crows” , but we choose to have these old tracks in new version in our first official cd cause we still believe in them and we would to give them a better diffusion, I thought that songs as „Lord Of The Wind” or „Ride Of Templars” deserve a better chance than a simple demo tape printed in 500 copies, and above all, were the fans that pushed us to play again this songs. The other songs : „Under The Sign Of Odin ‘s Raven”, „Hussard De La Mort”, „Innoxia”, „Wrath Of North”, „Stone Giants”, „Thermopiles” and „The Cave” are previously unreleased.”

Which members out of the band composed all these massive heroic melodies?

„Me and Mario the guitar player, are the composer of Wotan’s songs.”

„The translation from latin of „Carmina Barbarica” is „Barbaric Songs”, but for the ancient ones the word song had also the meaning of poetic composition of heroic deeds. In the ancient past these tales are in form of poems, which the authors use to declaim with the accompaniment of a musical instrument, in fact some famous epic tales had the word

Which were your main lyrical influences? Please report a bit about the lyrics!

„For the lyrics of Wotan I take inspiration from the ancient tradition of the Epos, the narration of heroic tales, on the trail of stories as Homeric tales or the Nordic sagas of the skalds, or the tales of the Chivalry novels. But I take it also from the huge quantity of historical books I often read, cause History, music apart of course, is my great passion. The lyrics are all based on some various historical or legendary facts that impressed me. „Innoxia”, for example, is based on the resistance of Vercingetorix, the Celtic chieftain, against Caesar‘s legion invasion, „Thermopiles” is inspired to the glorious episode of the Greek history: 300 warriors against the vanguard of the Persian army composed of 5.000 men; „Hussard De La Mort” is dedicated to the French cavalry troops of the revolutionary/Napoleonic wars; „Ride Of Templars” is spotted on the famous medieval crusade knights, but not on their characteristics of warriors, but on the several contrasts in their philosophy: they were monks but warrior, too (pray and fight ), they were the champions of the Christianity but they had good relationships with the Muslim world, they were personally poor but member of the richest order of the middle age, and all this is condensed in their black and white flag the „Beauceant“. The other songs are almost all based on mythological or legendary tales as „King Of Crows” which talks about a Celtic tale taken from a ancient codex; or „Black Conqueror”, which describes an old Italian tradition about the death of Theoderic, the king of Ostrogoths, died riding on a black horse which was the devil came to carry him to hell. The only exception is „Iron Shadows”, which is a song inspired by a preface of L. Sprague de Camp on the novel „Conan And The Spider God“. Fundamentally all the lyrics take origin from my love for History.” 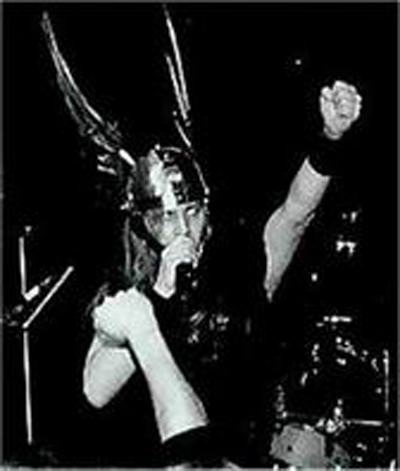 Who did the fine cover art for „Carmina Barbarica”?

Your assessment about it?

„I like it! To be honest I like very much, cause is not the usual cover with a „muscular warrior with a sword killing a dragon”, but is something different, the eagles are two real ostroghotic fibulas found in a burial near Bologna and for me they exactly reflect the essence of the barbaric art and the music of Wotan.”

Which are your own expectations, regarding „Carmina Barbarica”?

„We really hope that this album allows us to emerge from the condition of underground band, even if we will certainly conserve the underground spirit: play epic without compromises.”

Which things are you guys doing in your rare free time these days? Reading books of your country´s history?

„Yes, playing metal apart, this is my favourite activity in my free time. I’d like to know all is possible about the past of Italy and Europe. My biggest interest is about the ancient and medieval history I like especially the period of the barbaric invasions at the end of the Roman Empire. I think that in this age we can find the origin of modern Europe.”

Where has been produced your debut album release?

„We recorded „Carmina Barbarica“ in the Conquest Studio, which Doomsword‘s singer Deathmaster is one of the owners.”

Something noteworthy to tell out of the time inside the studio?

„Nothing of special to say about the time in the studio, I remember only the hard work, cause the recording in the traditional way, without the help of computer drum pattern or sampled orchestration takes a lot of time, but to be honest I don’t like too much the studio recordings, it’s not my dimension, I prefer the live concert that’s is my true dimension.”

„In the prospect we have some live dates: the 26th of February 2005 in German Andernach at the Swordbrothers fest, a date in Sicily in may this year, the Tradate Iron Fest in June, and in same month The Metal Camp fest in Slovenia, but some other gigs could be confirmed. After this period of live promotion we probably start to work to the next album. We have also the project to make a video clip, if will be possible with a minimum of historical background – it’s one of my old dreams.”