When some Metal- and Folk musicians got together themselves 2002 in St. Petersburg, in order to blanch henceforth an entirely inherent blend in things Folk Metal with bundled creative powers, the creators longed to be unusual from the beginning on.

So their new troop should create and record music in the same percentage while also presenting it busily live. In the course of that the greedy Vodka swallowers appeared on stages in their homeland already with popular acts such as Cruachan, Finntroll, Battlelore, Ensiferum and also Korpiklaani. Also on lyrical grounds Wolfmare were endeavoured around variety since their start.

The lively compositions of the eight-piece become sung in the world language English, but also in old German or even in classic Latin. And so the group feels thematic at home likewise in history as in modern times. It does not amaze in Wolfmare also, that herein three vocalists are at the start. 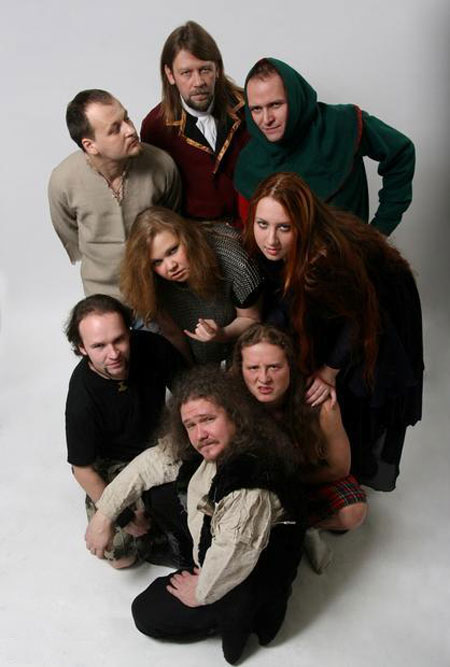 That one have to deal here therefore with extraordinarily creative representatives of the genre, shows above all their current second studio album: „Whitemare Rhymes”.

Markedly of some symbol-pregnant staginess soaked, attractive folklore instruments such as for example tight tinting sack-pipes are to be heard on the obscure atmospheric soundwork, just as moody as opinionated shimmed by cellos and fiddles.

Altogether the imaginative sound of these Russians can be placed surely in the subcategory Folk Metal, but the powerful horde interweaves also Black- and Doom Metal elements into its arts.

So I get together with bass player Dmitri Petras for a funny dialogue.

Which are your responsibilities in the Wolfmare horde?

„I am responsible to almost everything in the band, from playing bass guitar and composing music to attempts to force the band to rehearse and the lyricist to make lyrics. Sometimes I succeed. Sometimes it is hard, but there is no other way. This is my band.”

Please tell a bit about yourself and the current situation in your life.

„Certainly, the life situation is also hard. I have to do something outside music to earn some money for music. It can be scarcely called a “daytime job” since I am the web master in some huge Internet project and I work at home, but the daytime job often turns to midnight oil. Sometimes I envy myself since I do not spend much time in “home-to-work” transfers, and my job is not dull. All the other activities concern music, both in the band and on the air. By the way, one hour weekly I and Iana Nikulina present the „Twilight Of The Gods” show at local FM radio station. What a surprise, it deals with the heavy music! So that is the situation. My life is Internet, music and journalism.”

What do you think of your previous life?

„Everybody says that they wouldn't like to change anything in their past life. It seems to become another standard answer for the moralizing interviews at the dusk of life. Indeed everyone really wants to change something, since all of us are wrong sometimes and things are also sometimes wrong. That's natural. I would change many things beginning with the date and place of my birth, but it is impossible, so I don't care about it. Reality is here. Anyway things might be worse.” 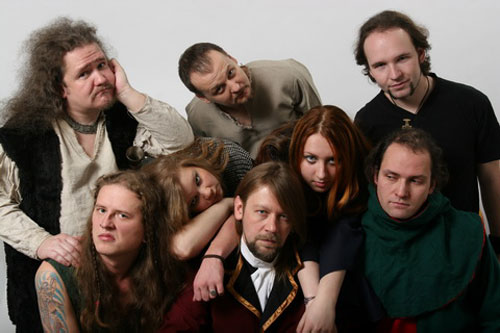 „The dreams were different through the years. Many of that I was dreaming about when I was 20 is now common and natural. I think that my today's dreams will also come true. The only thing that hardly will is extending a day to 40 or 50 hours for me to have more time. Hope the physicists will manage to do it.”

„The reliable people I can completely trust. Therefore the people, who will never give you an unpleasant surprise.”

What do you tell to people, which call Wolfmare clones of the successful acts in the genre?

„To be honest, I have never seen such people. Never! But if I see, I will recommend him to visit psychoanalyst. Nevertheless someday they have compared us to Metallica. I had inquired about what is similar between us and them, and got the answer: “You use guitars and drums as they do to produce that boom-boom-boom-boom”. According to that logic, any rock band is a clone of another. Indeed Finntroll influenced a number of Folk Metal bands, and I was also impressed with their first and second albums, but there is no need to copy them. It is a way for a local club band only. Why listen to them if you can listen real Finntroll?” 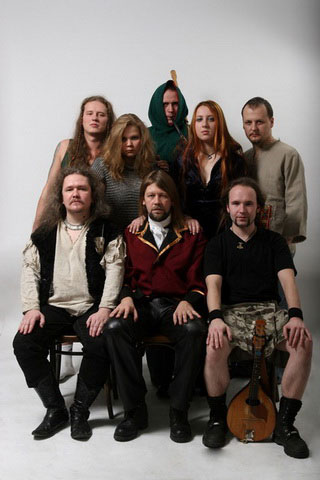 What are your strengths as a musician?

„I am the bass player and the bass equipment is rather heavy. I can lift a 75kg Ampeg SVT810 enclosure myself, so I am really strong musician.”

Please give examples of ideas you've had or implemented for the new music of Wolfmare.

„When we started recording „Whitemare Rhymes”, an idea appeared that one or two songs should be adorned with fiddle and cello. You can see the result in both music and the band personnel. We will need to record the choir for some songs of the next album, but we will do our best in order not to turn into Therion or Haggard occasionally.”

So tell about your proudest artistic achievement.

„I have a trivial answer to this question. The best has still not happened, and it is too early to sum up. I can be proud in two somewhat successful albums that were recorded only in gusto, but it is too small on a global scale.”

And what are you most proud of at all?

„Most of all I'm proud of my artistic achievements.”

Who are your favourite bands and why? And who are your heroes among them?

„I don't want to quote a list of the bands I ever liked since it is too long. There are only three bands that remained among my personal favourites through the years from my childhood. They are Motörhead, Black Sabbath and maybe Pink Floyd although I have not listened their records for years. The others are “easy come, easy go”, doesn't matter if I forget them in a half of year or remember for a long time. It is much more difficult to say about “heroes”. Due to my job, I had succeeded in communication with many famous musicians. I hold a high respect to them, they are really great people, but they are not the characters of the comic books but humans. They are very different, but any of them is a kind of interesting person. And it is great that they are humans since it would be too difficult to conceive the works of some irrational ten-feet-tall beings.”

Why do you make this staginess kind of Pagan Metal music? 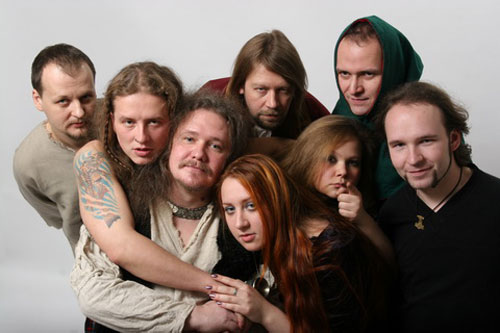 „The music we play can be scarcely called staginess Pagan Metal. I would prefer a term like Folk Metal circus. It was 2000 years ago when Hannibal proved that a travelling circus (especially one with elephants) can form the best army. It is an old formula but it should remain true. We are only to finish negotiations with the elephants' owners to master the world domination. Beware!”

What do you think about shabby music industry itself?

„Nowadays is a hard time for the musical industry. The situation is similar to the time when the everyday tape recorders appeared. It is harder to sell CDs as any somewhat interesting records become available to the whole Internet in no time. Yes, it is illegal, but it is absolutely free. It is silly to hope that everybody will abide the law or introduce some bans. They will not stop them. Some new ways to contact the audience should be found. If there is no such a way, the labels will encounter more serious problems. Unfortunately, recording music and releasing it is not free, so the musicians are hostages of the way the things are going. On one hand, now it is much easier to record an album than it had been 20 or 30 years ago. On the other hand, even those expenditures are often not repaid.” 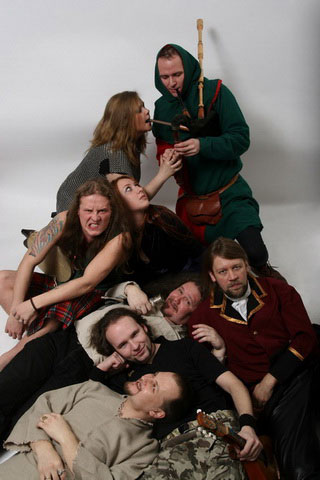 What are you looking for in terms of development of your musical style?

„Such things can hardly be planned since it is impossible to search for the style advisedly. There are so many factors that affect the style, and many of them are so unpredictable that it cannot be forecasted. I think it is much harder than even casting the weather. So we do not search, we just develop ourselves.”

Why should listeners buy the new album CD of Wolfmare?

„First of all it is green. Second, it is round as well as the pretty (and very useful) hole in its centre. At last those who created the album feel no shame for creating it. If you like our music, you must buy a copy or two to make sure. If you don't like our music, you must have not caught something, so still you should buy it to study in detail. And then you are to buy two more copies when you like it.”

„Oh, we are standing for a kind of election, aren't we? Unfortunately, they had not told us we are. But if that's right, we should compare us with other candidates. We really should know their programs to set up our own one. Please tell us what they are going to do and we'll do something special.”

„At this point any true Pagan Metal adept should reveal something concerning studying some smart books or a pilgrimage to some sacred places. He should tell you about spiritual torments and spiritual practices, about following the way of Odin or consuming some substances at least. It should really hit the audience and conquer the ladies' hearts. Unfortunately, I will not. I don't need seeking spiritual ways… But if it comes to spirit as a substance, I've found my way long ago. It is 500ml Koskenkorva Pohjanpoika, 500ml Minttu Original, and ice. Do not mix!”