Formed in 1997, Hungary's Without Face set out on their unique artistic journey. With a very interesting fusion of influences and impressive technical ability, it was only a short time before their first demo was unleashed in early 1998. After nearly two years they recorded their debut album „Deep Inside” in their home country.

The guitars and rhythm section take their cue from the progressive arena, with equal parts heaviness and complexity. The keyboards are the final ingredient, embellishing the overall picture, without ever overpowering.

„Deep Inside” caught the attention of Dark Symphonies records in USA, who recently re-released the album with brand new packaging. With two years since the recording of „Deep Inside” now gone, the Progressive Gothic Metal band signed a four album deal with Elitist records. 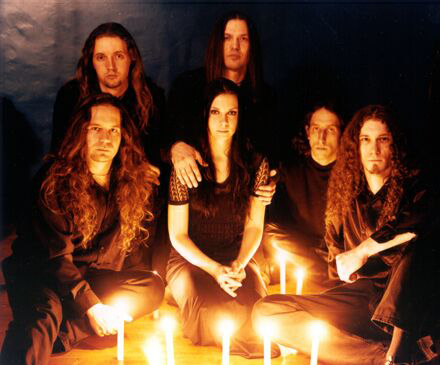 Without Face has finished work on their brand new album entitled „Astronomicon”.

The great dual male/female vocals are played almost as an additional instrument, sometimes harmonizing, at other times almost at conflict, but it always works to dazzling effect.

The questions are answered by the lovely singer Julie Kiss.

How has been developed the progressive Dark Melancholic Metal style of the band?

„All just came naturally. But since the foundation of Without Face there were some changes in the line-up, and the new members always brought some fresh blood in the band. When Without Face was formed in 1997, it was a kind of a melodic Thrash Metal with dual male and female vocals, but after the release of a demo, the guitarist section were changed, and also a keyboard player joined the band I think the present style of Without Face started to develop then. So, this new band created the first album, `Deep Inside` which started to bring the band an international success, and turned some heads at the labels in abroad, too. What was interesting in the album was the extreme mix of Thrash, Gothic and Progressive Metal with an unusual dual vocal style. But the band couldn’t stay together, so, a new bass guitarist, a keyboard player and female vocalist – me – came. The new members lead the band into a more progressive way then before, the new album are more complex, technical, and intense. Also the instrumentation is more complex, I think, something similar like in Symphony X. And this together with the very melodic play, and the dual vocals, which perform almost as an additional instrument, gives a peculiar atmosphere to the music.”

Please give a band history!

„There were no special reason of founding Without Face. It was only that 5 musicians wanted to play together… and they found a band. Just as it usually happens I guess! In that band in 1997 there were only our drummer and male vocalist from today's line-up, so they are the foundation-stones who never gave-up… One year later after the foundation a demo was released, it was followed by a lot of gigs in Hungary. Than in 2000, Hammer Music Productions released our first album `Deep Inside`, which was re-released a year later by the American Dark Symphonies Records who signed the band in March, 2001. Between these events we had a lot of gigs again, for example we played with The Gathering, The Kovenant, Zeromancer and Anathema. In 2002 we got an offer from Lee Barrett, and finally were signed to the new division of Earache: Elitist.” 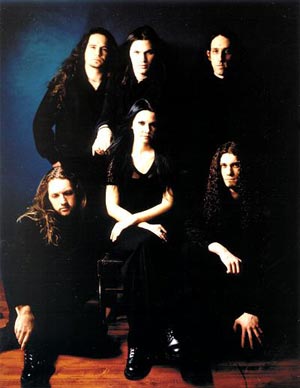 Which were your early idols out of the global (Metal) music scene? Which ones have influenced the songwriting?

„We can speak about early idols in the band only at our drummer, male vocalist and guitarist since everyone else have been in the band since only 2000. They listened to bands like Skid Row, Whitesnake, Queensrÿche, Judas Priest and lots of other bands! Since that the bands taste turned to a progressive way, and I think the main influence in songwriting became bands like Symphony X and Dream Theater. I guess this is why we are compared to them a lot, because the structure of songs are rather similar.”

How is to understand the name of the band - music ,without a face‘ – just with soul and mind?

„The truth is that we have always wanted to make our own music which can't be put in one concrete style, which is a bit `without face`. We don't have limits in music, I mean we are mixing a lot of things, styles in the songs, because we are not afraid of unusual and new things, ideas. I don't say that we don't have noticable influences, but we are listening to many kind of music, and I think all of them has an effect on our play, so these influences together make a very original mixture.”

„Astronomicon” – what means the title – perhaps an astral conception?

„It was the idea of Andras (male vocalist). Its a contraction of Astronomy and Lovecraft‘s Necronomicon. Both things are really complex and mysterious so I think it fits to the album perfectly. Andras explains it like that for him, Astronomy always means something about the future, and Necronomicon something from the past. So, its something like a mix of the mystery of the past and the future.”

The album got an overwhelming front cover artwork – who made it?

„The artwork was made by a Hungarian artist, Gyula Havancsák (www.skaelede.hu/hjules), his works are just amazing, sometime a bit reminds me on Travis Smiths works. He only had a demo of `Astronomicon` we made before the recordings and he created the artwork after that. He also made very beautiful pictures for every song in the inner cover.”

Reflects the cover art the conception of the album in any way?

„Yes, I think so. As my friend said about one of our songs (`The Violin of Erich Zann`), the frontcover is also a `controlled chaos`. In every song you can hear a lot of melodies and mood at the same time, which gives an individual atmosphere to the music. I think the artwork has the same feeling.”

Be so kind to explain a few songs out of the album! What is the specific meaning behind them?

„All of the lyrics are about strange, supernatural things. They are stories, mainly inspired by Lovecraft, Poe and Anne Rice, but in these lyrics, the goal is not really to give back the story itself, but the atmosphere of these writings, so if you read them, its not sure if you will mean the same I meant when I wrote the lyrics, because there are only the outlines of the stories put in an atmosphere of thoughts and feeling. The only song which was not inspired by anyone else's writing is `Weird Places`. Its a strange idea of the so called `other side`. Its interesting because most of the people think that our life is a part of a system, even if they think there is nothing after death. But in this lyric, there are no systems, just a huge chaos after death… the punch line in the story is that this guy in the lyric doesn´t know that he has already died, he only realises at the end. Anyway, the lyric are full of symbols, and hidden thoughts to find out… for example the subtitle is `like a mirror from another side`, because I think, life and death are very similar to a mirror's two sides. You cant see the other side from any sides, it only reflects back the one you are in …” 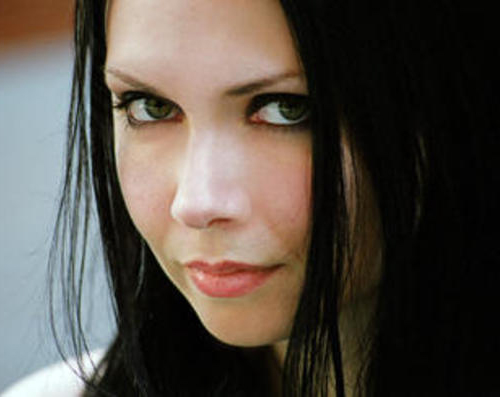 Which one of the band has written the most songs of „Astronomicon”?

„We always write the music together, so it doesn't happen like that one of us writes everything at home and then comes to the rehearsal to show the others what to play, no. It happens like that someone comes with an idea, and we start to build the music around it. After a while we start to put together these parts, and when the music is ready, then I come with the lyric, and we compose the vocals. I think this is the reason of that the music is so colourful, because all of us put their ideas into it.”

What were (and still are) the inspirations for the music of Without Face?

„Especially the books of Anne Rice – `The Witching Hour`, or the `Vampire Chronicles` – , or the short stories of Lovecraft, and Poe … but they are mainly inspiration for the lyrics and the vocals.”

What is your definite goal with the band?

„We wouldn't like to deal with anything else, only music. We would like to play a lot of gigs, everywhere around the world… we really wish to see many countries and play in all of them! We really would like to play a lot, and we do in Hungary, and also trying to arrange gigs for autumn. Anywhere and everywhere! Please check our website at www.withoutface.com for details since we put there all news as soon as we get them.”

„Well, it seems that in September we are going to shoot a video for the song `In The Garden`, and from October we plan to pack in our things and go away from Hungary for a while to do gigs all around in Europe! And of course we start to write new songs!”