These third album shows respectable, that the band from the northern part of the famous green isle around singer Ard Chieftain isn`t willingly until nowadays to change or modify their unique style at any percent. In Fact: „Honour Amongst Chaos“ is true, raw and authentic celebrated material of the massively battling kind, which really needs no false ideals inside to show the creators attitude.

At all, the indestructible quintet does it here once again with highly passion and litres of boiling heart-blood. Therefore the new compositions on „Honour Amongst Chaos“ breathing all together a massive triumphal spirit. I spoke with lead- and rhythm-guitarist Saul McMichael, member of the wild bunch since May 2004. 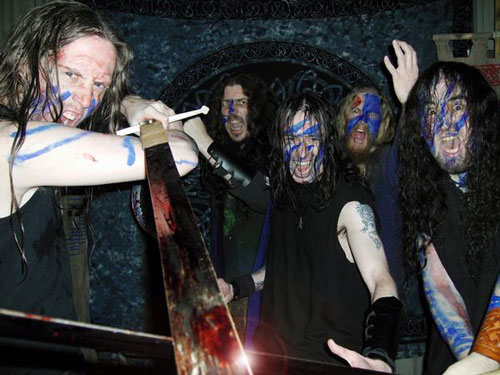 Hello Saul! At the beginning, please tell me a ´bit about yourself.

„I’m 24, and I’m 6ft3 and I play guitar in Waylander. I also have a bad reputation for falling off tables, burning down tents and not leaving the backstage bar until I’m forcibly removed at 6am.“

What do you think of your previous heathen life?

„I was always happy playing guitar and drinking, but when I joined Waylander I had a reason to. I think I’ve grown up a lot since then.“

Which are your lifelong dreams?

„I would love to play all over the world. Japan would be cool. They sell chocolate flavoured Coke there... Amazing!“

What kind of personalities do you prefer in your pagan life?

„I prefer people to be themselves and have the backbone to say if something is wrong about the world.”

Which are your responsibilities in the Waylander horde?

„You know, the usual job for a guitarist. Maintaining the web site, myspace, co-producing, PR for the label, all interviews, most multimedia and song writing/editing..... While the rest...“

Which are your strengths as musician?

„Probably being able to bring different styles to the table, without them standing out to much. And I think I’ve a good sense of humility. There is nothing worse than a guitarist upstaging his band or acting like a big headed dick in front of fans.“

Please give examples of ideas you've had or implemented for the music of Waylander.

„Since I joined the band I really tried to bring the guitar section to a new level. I loved the previous riffs but none of them were big or fast enough to really make me excited. It’s quite easy to pick out the part I have written. If there’s blast beats and black metal tremming, then I’m to blame.“

Please tell me about your proudest achievement!

„Probably receiving the new album and holding it in my hands. Since I was 11 years old I wanted to have my songs heard by the masses and finally seeing them on CD after so much work and time was really emotional.“

What are you most proud of at all?

„Sticking to our guns and writing what we wanted. It would have been easy to tone down or cheese up our songs to sell CDs. If you have pride in what you create then you’ve already won in my eyes.“

„Joining Waylander. I used to be cool before I met them. Joking of course... I was never cool.”

Which are your favourite bands and why?

„It’s hard to pick only a few. At the moment I’m really into Dethklok. I know they are joke band from a cartoon, but their album is amazing. It blows 90 % of all serious Death Metal out of the water. Apart from that I love Wintersun, Bloodbath, Katatonia, Gojira and Eluveitie.“ 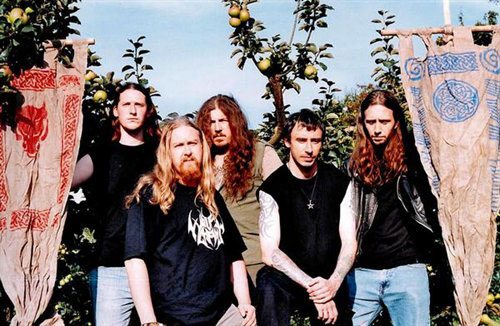 Which are your heroes among them?

„I don’t really have any. But if I had to pick someone who I really admire, it would be Mikael Akerfeldt. His song writing ability is unreal and as a musician, out shadows most of his peers. Not many people could sing a beautiful acoustic ballad with Opeth then blow out your fucking windows when growling with Bloodbath!“

So, which are the qualities of a good band in your opinion?

„If they keep it simple and don’t forget or lose the core of the song with showing off then it’s a good start. In my opinion all styles can feel uplifting. For example, 1349 and Katatonia are so different in style but both have that same uplifting passion in their songs.“

Why do you make this kind of pagan folk metal music?

„It’s fun. I like doom but imagine listening to that every day...“

„Get ready to record our next album, hahaha. Only joking. We are working on new material at the moment. In 5 years I’d like to have played the main stage at most of Europe’s biggest festivals.“

What's your ideal song on the new Waylander record?

„At one point each song was my favourite. But „Beyond The Ninth Wave” would have to be the song for me. It was the first song that I had completely written for the band and it just seems to work so well. I was scared that it was a bit too dark for the band but it is so great to play live with the pipes and ending on a squealing solo! Each time I play that solo I pretend I’m in W.A.S.P. ... serious.”

What attracted you guys to your current record-label Listenable?

„We were approached by a lot of labels over the years, but Listenable were one of the few that really got what the band was all about and didn’t just want to cash in on the whole folk metal genre. We seem to have a good relationship with them and I hope it continues.“

What do you think about the shabby music-industry itself?

„I really didn’t know about half the work that was involved until 6 months ago. Labels, booking agents, promotional agents... asking again in another 6 months when I get used to all the work.“

What kind of goals would you have in mind if you get a contract with a big major label?

„We would love to do a concept album about a certain Irish myth with a full Celtic orchestra. That would be awesome! Maybe turn it into a live show with performance artists and full on battles.” 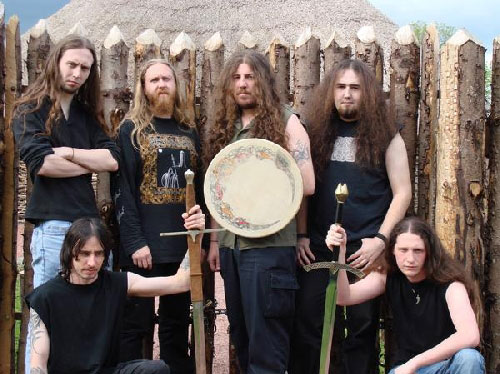 „I think this is the first album where we really knew what we wanted from the songs. And now that we have a perfect line-up I can safely say that the next album will blow this one out of the water! I plan to make each album bigger and more epic than the last.”

Saul, how big do you ultimately want to become in music-biz?

„Not too big. As long as I can afford my own castle, X-wing and have my own show called „pimp my battleship” then I’m happy... you know... the basics.”

How would you describe your working style for the promotion of the band?

„I think we will always have to play harder and drink more at each show. As long as people leave happy and chanting then it’s a good night.”

Tell me about a time where you had to deal with conflicts in the metal genre!

„We never had many conflicts but in the early days, a lot of magazines laughed at the idea of „folk metal” and said it would never last... Look at the genre now: It’s huge and all those magazines release battle and folk metal specials, hahaha, that’s ironic.”

What (metal) magazines do you read?

„I don’t buy many magazines in the UK. Most build up bands for a while then tear them to bits if more than 2 children with bright pink hair don’t buy there CDs.”

Why should listeners buy the new Waylander CD?

„It’s folk metal at its rawest. There’s no Leprechauns, Guinness or songs about how green the fields are. Just old school thrash, black and death metal with tons of really fast folk music.”

What can you do for the fans with the music of Waylander that other candidates can't?

„We will come out and drink with them all. Most back stage areas are so civilized and quite. The most fun people we usually meet on the road are at the bar or under a table.”

When were you most satisfied in Waylander so far?

„Right now! But we have a Belfast album launch in a few weeks for friends and family. I think playing to them at this point in our career will be one to remember.” 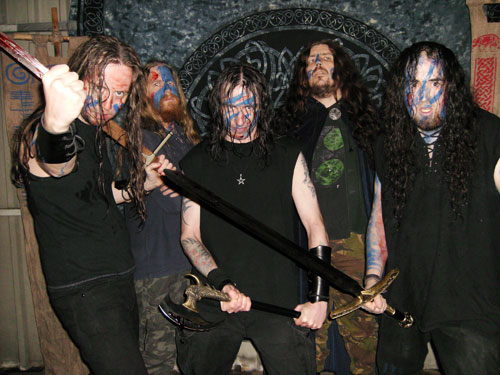 What are three positive things your other musicians in the band could say about you?

And, what negative things would your band colleagues say about you?

„I think the laughing says enough...”

Saul, if you were an animal, which one would you want to be?

Which spiritual ways in life do you seek?

Do you have plans in mind to have children in the near future?

„Definitely. Things are never as bad as you think. Technology makes it easier for us to know about every little bad thing in the world. Things were as bad 50 years ago. We just didn’t have the ability to know it all.”

There's no right or wrong answer, but if you could be anywhere in the historical world right now, where would you be?

„I would probably go back and invest money into the first Star Wars movie... Cha Ching!”

What would you do if you won the lottery?

„I’ve always wanted to buy the Shroud of Turin. And make a kilt out of it.”

Is your singer Ard Chieftain able to drink more Irish beer as a brown-bear after a long summer day?

„He thinks he can drink more Irish beer as he is used to it. I still have the video of him getting drunk and lost in Bavaria. Remember when we had to find him before he died, Markus? Thank you for the interview. It was the most funny one I have ever done!”