When the four proud warriors marched into the Power Metal arena in 2018 with trembling hearts straight from the dark with their debut album „Reborn“, they received frenetic applause.

The inclined masses were enraptured by highly hymnal material, which meant a fortune all along the line for the internationally occupied, well-trained male association. Warkings is uncompromisingly about fight, courage, glory - and something other than victory is out of the question for them on the successor „Revenge“. They see themselves as reborn fighters for good, working with metaphysical power.

As guitarist Crusader announces in a visionary manner, the formation was not surprised by the resounding success of their first work.

„When we returned to God’s realm we didn’t read magazines or any other kind of informations. We’ve been in so many kinds of battles all over Europe and we had so many warriors joining our army that we just wanted to come back as soon as possible. But when we’ve been on earth and met our warriors, they all told us that they love what we’re doing and will stand side by side with us. By the way I didn’t know that you guys write books about warriors and their battles. Seems to be kind of a bible or what?“

For what kind of musical ideals beside all the attitude stands „Revenge“?

„We learned a lot on our battles we did for ‚Reborn‘ the last two years, and when you see all the warriors in front of the stages celebrating our songs, you know well that this is the thing you’re here for. God or the Allfather or whoever you call him, sent us to earth, to gather all that people, get this battles done and celebrate them. With hands up to the air, standing strong and join us no matter how much enemies we’re facing. That’s what we describe in our music, that’s what we’re doing on stage and that’s what we took into the music of “Revenge”. Showing the strength, that we all represent as one: The Warking Warriors!“

What is the most important fact for you guys on these 2nd album?

„The crusades for Metal and freedom was a time full of victories and triumphs! We just wanted to hang on and take this as motivation for the next strike. We learned a lot, improved our skills, learned about our strengths. You wouldn’t let your brother fight with a sword if you know that he is a better archer! The same here: We started to strengthen the force of every Warking! Just listen! Beside this we pissed off some old friends and foes which wanted to join us but god refused them to leave heaven … or hell, you name it. So some of them tried to escape, made it and hunts us. They underrate the might of our warriors fighting with us!“ 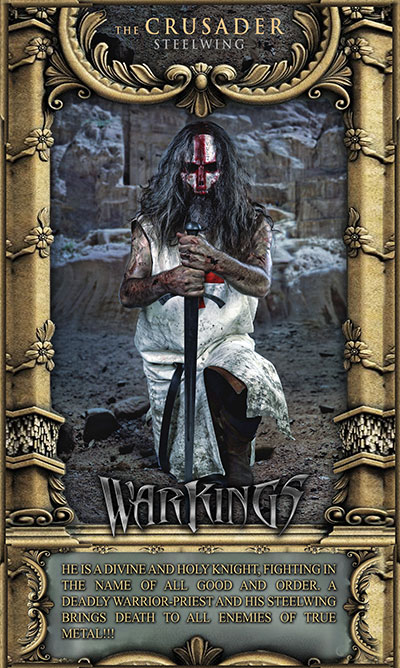 It feels massively empowering to listen to these highly combative and encouraging songs, a kick-start for an upright day so to speak - thus, one can say that determined and rebellious emotions dominate the new material, correct?

„If you’re hunted from some undead men right out of hell you need to be focussed and determined. We’re the chosen ones! We also know that our order from God (or whatever you name him), to built an army and fight for Metal, needs to get fulfilled. We write about all that as we write about the old days and what we lived back then. We write about the tension and the adrenaline stuffed veins, how it feels if thousands of critics try to kill you. Beside that we’re used to convince people to follow us into the battles since ever! How could we prepare an army for the wars we fought? Well, beside the Spartan, he never convinced somebody. Weather you’re a Spartan and follow the code of conduct or you’re a renegade which he used to kill. It was a hard work to convince him not to act so in this age.“

The new material sounds much more organic, honest and above all fresh and unspent than most of the much too much perfected Power Metal - what is your recipe for that?

„You need to have experienced what we did in the ancient days to write songs like we do. We tell our stories, what we saw and did and what we’re doing right now. We don’t write about flowers on a sunny day. It needs to be rough! But to be honest, here’s another thing: I can’t speak for the other Warkings but if you’re used to bear a sword, crush bones, decapitate enemies and send hundreds of them to hell … your fingers will not play that precisely like a nice little guy who practiced all the time at home, surrounded by some maids and his mom, bringing dinner at the right time etc. You get it? We’re not here to be the best bedroom musicians! We’re here to call our warriors together! And I learned that it’s better for our music to have a thick, raw, unpolished sound sent straight outta hell.“

Are some topics in your new song texts that deal with anything else than battling and fighting?

„No … why should we? Singing about naked mermaids which wouldn’t be maidens after we met them? Come on, mermaids … kissing a fish is nit that nice.“

Since you are internationally positioned, the collaboration probably only took place via computer etc. until it went into the studio? How can one imagine the work on an album up to the completion at Warkings?

„All this … you call it ‚combuta‘ … right? … stuff is annoying for us. The Viking is into all this shit, but I don’t care. I rather take my sword and train for the hard times. In the end we’re a bunch of men who make music like other bands even if we live in two worlds and can get profits from both sides. Most of the time we just hang around a bonfire and try to get sober or at least not to be to drunk. We tell our stories about our victories, the one or other more, the Tribune less … hahaha! And sometimes somebody starts to sing an old tune, the next Warking joins and that’s the base we work with. If the hangover doesn’t erase the tune, we enter a studio and work on it. How easy is that. Sometimes another musician shows up and leaves some hints. Man, all I can tell is: there are a lot of good musicians in heaven! Sorry, that’s another subject.“

Were the new songs again written in community? And how long did the work take for the complete material?

„Yes! The Warkings! It’s us! Look at the cover: Walkings! Written in capital letters. We didn’t work to much for these songs but I’m not sure if we as Warkings see it from a different angle. If you live thousand years or even more one year is just a blink of an eye. We started drinking … eh … writing right after we came back from our crusades we did with Amaranthe. Except for the Spartan … he trains all the time. We had some problems getting sober for the summer festivals (these damn Vikings have a pretty good mead) but we used all the time between these battles to write, record and finish this album. We knew that we’re conquering and we wanted to use this momentum: overrunning the critics.“ 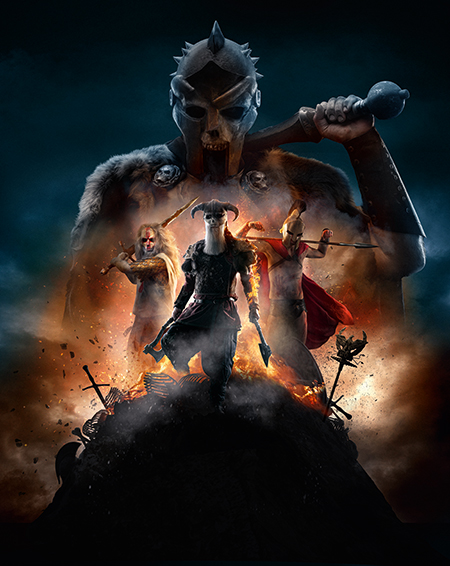 What have been the hardest or most difficult passages of the songwriting-process this time?

„Getting sober was definitively hard. There is no hangover in heaven, but we learned our lesson well here on earth. And, like all other bands, I don’t like the recording process. The writing is over, you just sit there and play to get it done. Hard to explain, I give you an analogy: if you’re in the middle of a battle, you need all your skills and creativity to stay alive. Your body is on fire, you fight with everything you can grab and your movements change every second. That’s songwriting. After the fights you go back to your army, your body tries to get some rest and while you walk you need to kill all the half living enemies lying on the battlefield. Sometimes you can have a talk with your bros but it is just walk and strike the sword into their torsos. Stupid, boring and monotonous work which needs to be done. That’s recording.“

Is it allowed to ask you about any special musical influences which led this time to the new material?

„It is, of course. The influences came from whoever visited us in God’s studio. But we also listen to bands when we prepare for the battles, backstage or when we’re in the same hall. Everything we hear influences us and I cannot exactly tell you who it is. It’s in your mind, your subconsciousness works all the time when you listen or play.“

In which position between similar Power Metal acts do you see Warkings?

„There is no similar Power Metal act. We’re the Warkings. Period. Thank you! God bless you! When we started Warkings we had more problems not to kill each other. The Viking’s cheeky, the Tribune weird, the Spartan dangerous and I’m mostly out of humor. Combine all that with alcohol and weapons. You get the idea. But we had this order and we’ve got our stuff together. We started writing and of course heard some Metal bands, from this or the other world. I can’t tell you names. This world is the spawn of a shitload of cool bands. So is heaven …“

„Don’t you forget that we’re new, not only as a band, but as living creatures on this earth in this age. This world got so much new technique and lifestyles we never saw before. Music is just a little part! On the other hand, Metal is our mission and of course we’re interested in it! And as long as music is Metal, we’re into it! Listening to music or meeting other bands is great. Most of them are beautiful friendly people and we had a lot fun when we meet them. The business is total different to our old jobs: compared with the ancient days when everybody is trying to kill or hunt you this is what I call a nice life with nice people.“

„Indeed, there is. I want you all to join our Warking Warriors! Our Army will rise against the enemy. We‘ll bring the undead half alive scum from hell back to where they came from and gift them all the shit music we recently heard in this world.“