The ancient sea god Poseidon, he should get even more wet eyes with the new album of the Austrian Symphonic Metal visionaries Visions Of Atlantis.

Finally, the exceptionally stable formation with the hit-strong „The Deep & The Dark“ delivers their most convincing and most timeless work to date. Lovers of the genre will discover a seductive collection of songs of exquisite, compositional purity and remarkable, vocal exclusivity. 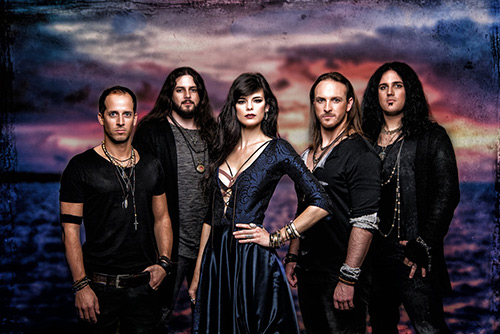 Even Clémentine Delauney and her male counterpart Siegfried Samer shine on this direct hit release with brilliant performances.

Clémentine, with joy in her voice at the start, is pleased with the compliments.

How do you feel now, after having finished the vocals for these new, truly outstanding collection of superior listenable Visions Of Atlantis songs?

„Thank you for such a compliment! I am extremely happy that we finally managed to put a record out. For some years we had lost all hope this would ever happen. I am so happy to go on tour and present the songs to the audience!“

How complicated was it for you to bring in your vocals in the new songs?

„It has not been very complicated to be honest. I worked on the vocal lines closely with our producer, Frank Pitters from Silverline Music, who was very open minded and willing to give me a lot of freedom. I wanted to sing in a way that would go with the music and the emotion I felt. We decided not to go with classic singing on the whole record and I am so happy we made that choice! I could use my voice in many ways and this is something I love to do. We also changed keys when necessary, so that I could feel more comfortable. Recording these songs was just pure pleasure!“

Sounds like the ‚real' ones for an Visions Of Atlantis album have finally come together, right?

„Well, yes and no! This album was supposed to be written and recorded by the very founding members of the band but it didn’t happen the way we wanted it to. So, in the middle of the year, last year, we had to change plans and take serious decisions. Mike Koren, the original bass player, recorded the bass on the album, but the rest has been done by the new line up. As Werner, Mike and Chris couldn’t join us for the shows either, we had to play live with other people, Christian and Herbert, and it has been very natural for us to ask them to join the band when we realized we couldn’t go on with the line-up we had. Now we finally have the right team to work with and play live!“

To my mind, „The Deep & The Dark“ is the masterpiece of Visions Of Atlantis. Your opinion?

„Oh, thank you! Well, it’s very hard for us to qualify our own work as masterpiece but we all agree in the band that this is the best album Visions Of Atlantis has ever released. We are very happy with the songs we managed to come up with and people at shows seem to really enjoy them! We do get a lot of compliments every night!“ 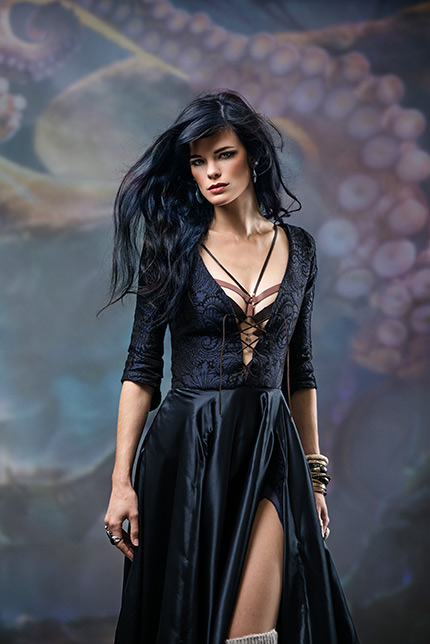 How did it feel in the studio to sing the songs and which one(s) were the most exciting for you to vocalize?

„As I said I felt very comfortable even though this record was also a great opportunity for me to explore my vocal range and my limits! I truly enjoyed recording the ballads as I could go in details, singing softly with my chest voice, which I never really did in the past. But I also loved being able to go full force like I do on ‚Book Of Nature‘ which was a challenge singing wise!“

What fascinates you most about the sea, shores, all the sailor-myths and classic seafaring?

„The unknown, the power of nature…oceans are so impressive, intimidating, full of stories, treasures, wonderful animals. I love the idea that back in the days, before we had discovered most of the lands, one could decide to sail in one direction and maybe discover a new land … a new civilization, new cultures. I would have loved to be an explorer!“

Have you ever been on an old sailing ship?

„Nope, but I think I will do this one day! I love old ships, they carry history and it must feel like a genuine way of sailing!“

What is your personal „The Deep & The Dark“ in your mind?

„This title refers to what is dark and hidden deep inside ourselves, our demons, our secrets, our fears, but it also refers to the darkness our world is experiencing out there, when hate and terror rise, when people lose their humanity, when the thirst for power lead men to manipulate and exploit others… Many of our songs can have a double meaning whether the darkness lies inside or outside …“

Do you have faves among the new songs and why?

„This is very hard for me to tell which song I like most because I honestly love them all! I have special feelings for ‚Ritual Night‘, ‚The Last Home‘ and ‚Prayer To The Lost‘ as they deal with very personal topics …“

What are you most looking forward to when it comes to upcoming Visions Of Atlantis gigs?

„We are currently on tour and the reactions from the audience on our new songs have been fantastic so far! We had high hopes people would enjoy this new album but without having any certainty this would really be the case, so to get such feedback on our show every night is absolutely wonderful!“

„I would like to thank all the people who knew and liked Visions Of Atlantis from before and haven’t gave up on us! It took us a long time to put that record out but we are finally back and we hope this new record will be the first chapter of a long new era!“