Larynx-talent Jake Rogers, in his sign an outstanding summoner of the ancient gods of steel, allied his bardic magic in 2010 with Lee Campana’s powerful six-string sorcery.

Their goal was to forge a devotedly tribute to the old sound of Heavy Metal. To the area of leather and rivets. Short later Salt Lake City, USA based Visigoth unleashed the demo „Vengeance”, followed 2012 by the appreciated EP „Final Spell“.

Now the time has come finally for these brave defenders of the eternal cult to enlighten all the real followers of classic Heavy Metal with a truly brilliant full-length debut: „The Revenant King“! Lead guitarist Leeland Campana brings his troup closer. 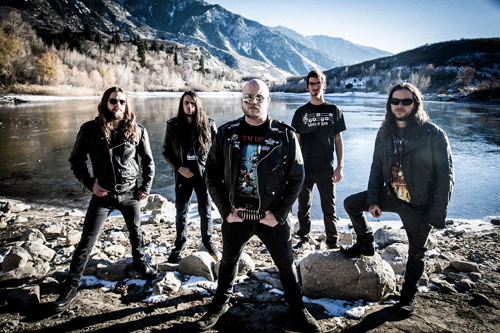 Hey Leeland, what counts most for you in making music with the band?

„First of all each individual member of the band will have their own list of particular things that are the most important to them when it comes to writing, playing and listening to Heavy Metal. Part of being a succesful band no matter what genre is to be able to recognize and respect differences as well as common ground between the members so that the music you end up writing and playing together is the best that it can be. For me personally though as a songwriter and lead guitar player for the band, the thing that counts most to me is to make sure the songs we are writing have something unique and special within them that is something that I would want to hear if I was a listener objective from the writing/recording process. I want to really feel like im full heartedly invested and excited about our songs because I believe that if you can invest that sort of care and attention into your work, the listener will be able to tell whether your being honest about your music or not. That being said it can be a real challenge if something isn't coming together as well as you hoped, sometimes you have to start fresh and leave those ideas alone.“ 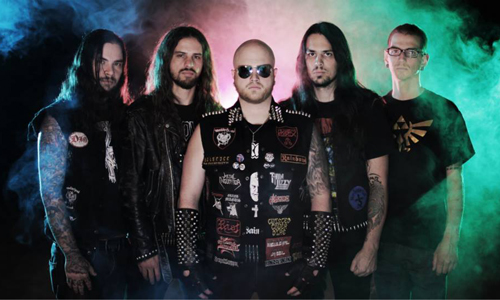 Did you ever expected at your very early Metal days to play in a own high-quality formation such as Visigoth?

„I'm really glad you asked this question because it is something that I think more musicians especially those that are starting new projects should be thinking about all the time. Initially when I started playing in bands it was just because I loved playing Rock and Metal on the guitar and performing live with friends. It didnt really matter if the song had 2 generic riffs and a wanky guitar solo that went on for far longer than it should, it was all about the "fun" of playing. Eventually however you reach a point where you have to ask yourself, "Is what Im playing any good? Or do I just think its good because I wrote it?" In my early Metal days I would never have expected to find myself playing in a band alongside such talented musicians (Jake-vocals, Jamison-guitar, Matt-Bass, Mikey-Drums) as Visigoth has, especially living here in Salt Lake City. What I did know though is that I really wanted to be in a band that could be considered "really good" more than anything. When Jake Rogers and I decided to start what eventually became Visigoth, the conversation went something like "Ok...so lets actually do it, lets try and write some really good stuff." I think that positive attitude and set determination was really what helped us accomplish what we have so far with our first full length album.“ 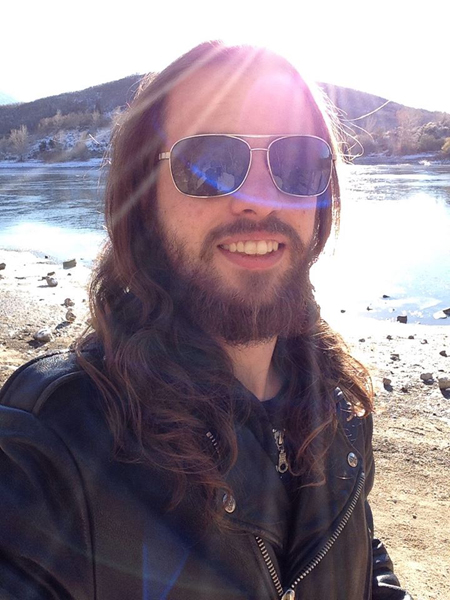 The Visigoth‘s were a Germanic tribe - why did you guys choose that special band name?

„The real Visigoth's are remembered for being nomadic warriors that stood up to Rome their oppressors and eventually sacked them in 410 AD. That's not just cool on its own, but it also has some parallels to the attitude and feelings of what alot of people like about Heavy Metal. Suprisingly this name hadn't been used yet by any established band and we felt that it would make a good name for our band in that it seemed to fit well with the kind of sound and presentation we wanted to have for our music so we became "Visigoth".“

How did you found such a outstanding touching and catchy melodic style? Any cult bands as specific influences to mention?

„Our vocal melodies, catchy choruses and guitar lines sound the way they do because when we set out to start writing riffs for a song we primarily have the vocals in mind to be the thing that drives the melodies and overall mood for the song. Most of the guitar work for Visigoth is relatively simple and straight forward for this purpose (except for maybe the verse riff on "Dungeon Master") We want the music to first grab your attention then deliver some satisfaction, not only to the listener but also ourselves as were writing. The formula we've been using is to try to keep the vocal sections in each song as open as possible for whatever lines Jake finds the most inspired to sing. Usually the bridge and solo sections are for me to try and build energy and come up with cool ideas with the guitars and showcase whatever melodies and styles I have in mind. A few bands that I look to more often than not for reference with these kind of tried and true song structures are Judas Priest, Saxon and Manowar. However we are not trying to specifically be just like those bands or necessarily to try and be better by any means. We build our musical style from such a large pool of classic metal and hard rock it would be impossible to list every band adequately. If I was hard pressed in naming the most specific influences to Visigoth's sound overall I would say we probably sound pretty similar to Twisted Tower Dire and Grand Magus in alot of ways.“ 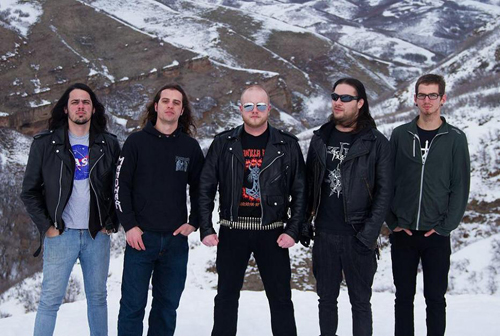 „A blend of epic and classic Heavy Metal styles with some catchy sing along chorus's and heavy no frills guitar playing that is the sound of Visigoth.“

The very well made, catchy contrasting melodies are a main part of the extremely well balanced material - who takes care about so successful?

„No matter who starts writing the song initially or how many rough versions the song sees, once we start rehearsing the live as a band everybody contributes to make the material as balanced as possible. Jake focus's on primarily what the vocals are going to do and makes contributions and suggestions for the guitar melodies and riffs. I primarily focus on everything guitars, drums, and bass related and will occasionally make suggestions for vocal melodies...The entire band however ultimately dictates the arrangement of the the song in its finilized structure, small changes will happen all the time until we feel like we've gotten it right.“ 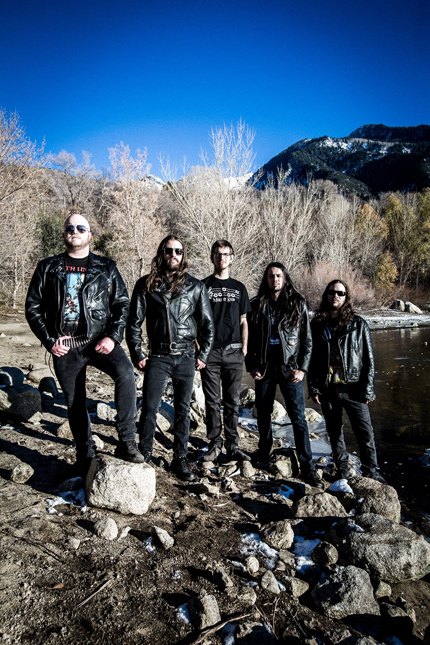 „The songwriting for our first album is a collection more of some of the first songs we ever wrote as a band "Vengeance" and "Iron Brotherhood" to the newest songs "Revenant King" and "From The Arcane Mists Of Prophecy". So, in reality this album actually spans a time period of about four years of us writing songs. Some listeners may be able to pick up on the way our style has developed and changed slightly up to where it is with the newer tracks. We are writing material for the 2nd album already to try and get a head start, haha. The main composers for each song initially is more or less a toss up between me and Jake. At the end of the day every song is brought into being by the efforts of each individual band member as a whole.“

What stands behind the album title „The Revenant King“?

„The Revenant King is a direct tie to the bearded undead warrior in the amazing cover artwork by Kris Verwimp. This character or icon sort of developed when we were trying to come up with what kind of artwork would represent the band the best. Naturally we settled on something with an epic fantasy/ battle type setting and the vague character of the Undead Warrior kind of just emerged. The title track "Revenant King" was written before we came up with a set name for the song or the album, but Jake developed a story line and vague history for this character in the lyrics he ended up writing and it was decided that this mood or idea would be the title and theme of the album.“

Please report about the main content in general of the lyrics!

„Jake would like the readers to know that the lyrics are pretty much all just fantasy storytelling. No hidden messages or deeper meanings, just tales!“

„Necropolis“, the Manilla Road cover on „The Revenant King“ - please tell about the background for the decision to cover that song!

„Two things to start with ... 1. we all love Manilla Road... 2. "Necropolis" is catchy and driving in a way that inspires us to write the kind of Heavy Metal we do. Also we felt strongly in deciding to do a cover we first wanted a song that would somewhat represent our taste as a band and direction we feel like we were headed, be a blast to play live, and be a good mid ground between obscure and recognizable. My personal feelings were that I wanted a really fun upbeat cover to play live; its always interesting to see who recognizes what we are playing and sings along and who is going crazy just because Manilla Road wrote a damn good song, haha.“ 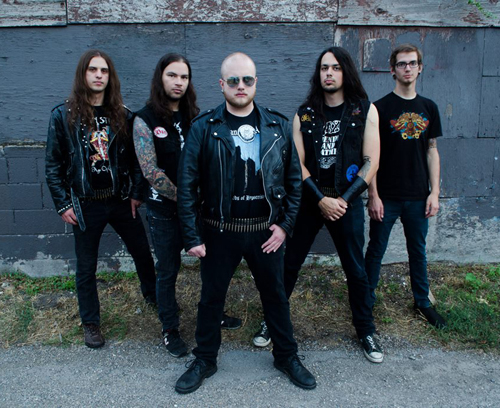 Is it allowed to ask you about other nowadays special musical and personal influences?

„Of course, I dont mind divulging special influences. Over time I've come to realize a huge inspiration for me personally to write music has always been movies and more to the point scores for movies. John Williams, Ennico Morricone, John Carpenter, and Vangelis are all composers that have worked in and out of film that I really admire. I secretly want to do a Heavy Metal arrangement of the Conan The Barbarian soundtrack by Basil Poledouris. Specifically the track "Anvil Of Crom" has some of the most epic sounding yet unique melodies that I haven't heard before or since.“

To which music do you listen to at home mostly?

„For me this is an almost impossible question to answer, its like trying to choose between Time Travel or Space Travel. However this is what I have been enjoying the most recently in the Heavy Metal and Hard Rock Genres... For the more hard Rock oriented stuff I've been listening to Lucifer's Friend (specifically the album Mean Machine), Rainbow, Small Jackets, and Gary Moore's "Wild Frontier." For Metal recently its been Judas Priest "Point Of Entry" and "Ram It Down", Virgin Steele, Saxon, and Grave Digger (pretty much everything, my first introduction was the album "Rheingold").“