Since the 1998 debut album "Till Fjälls" the most enthusiastic of his fans left him no more peace to publish a direct successor.

At some point Andreas Hedlund realized that this was indeed a good and sincere thing. And the Swedish singer and multi-instrumentalist, known primarily as Mr. V with his band Vintersorg, finally went to the full.

So there is now, after the various, partly nevertheless very experimental trips of the last years into the progressive camp, again all around heartfelt and close-to-nature Viking Folk Metal. "Till Fjälls Del II" was titled the new album meaningfully. And, as Andreas reports, he was never interested in doing exactly what others expected of him. 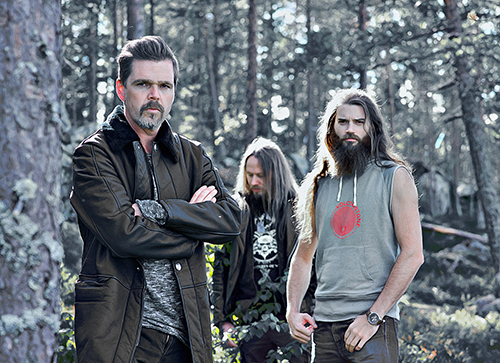 What can you report mainly about the global feedback 1998 for „Till Fjälls“?

Nature-related Black Metal was pretty unique at that time…

„I didn’t really had a clue about anything regarding how the album would be perceived or what people would feel about the whole thing. I just wrote music right out of my mind and heart and was really satisfied with what was coming out. I’ve always like different kinds of music so I thought it would be a great idea back in ´93-94 to mix Black Metal with acoustic guitars and clear vocals and keyboards, I think that some people didn’t really appreciate those ideas back then. But later on some of them did just the same themselves, when a lot more bands have done something similar. When I recorded the album in ’98 it was still pretty unique in a way and I felt that when the album was done I really had cracked the code to who I was musically and lyrically. Since then I’ve just done the same thing, which means that I follow my heart and all the albums have their own identity or entity within the frames that are set out for that particular album.“

Lots - positive/negative - has been discussed about Vintersorg's progressive phase after „Cosmic Genesis" - is it over, out and finished now?!

„Hard to tell as I just go by an emotional state and just try to tune into that frequency of inspiration when writing songs. But I have other progressive outputs nowadays that get the most progressive element of my musical mind aflare, so I think that with the latest years with Vintersorg we’ve found or place to be and with this new album it feels like coming home after many years, with new experiences and new perspectives. But it’s very important for me not to just repeat myself as a composer, then I would lose interest I think.“

„Till Fjälls Del II“ - how do you feel now, after having finished these new, back-to-the-roots, thrilling and pretty majestic collection of often deeply touching songs finally ? 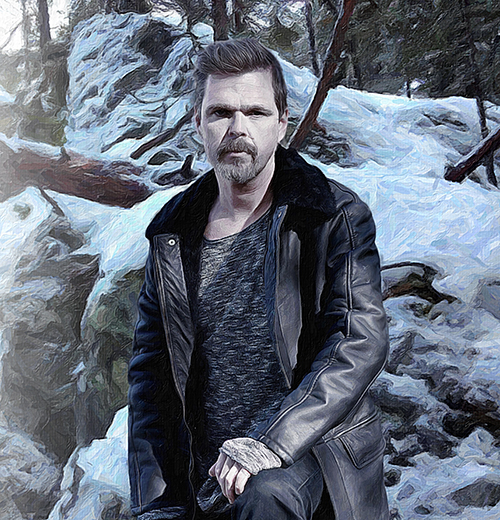 „It’s been a great journey and a very pleasant but also hard ride. It hasn’t been exhausting or complicated instead it always my own expectation of the songs that are the hard part. I worked on the songs until the last day of the mastering of the album I think. I was keen on really have everything perfected so it would match the vision I had with the album. I haven’t really listened to that first album during this process, it was meant as a continuation and not a copy. We are very pleased with the result and I’ve already composed the next album just out of inspiration.“

If you want, please be so kind and describe your development within the last few years as a personality, character and musician!

„Hard for me on the “inside” to really tell. I think as a human I’m such a curious person that I want to learn new stuff all the time. I work as a teacher and also as a project manager of how to incorporate digital tools in schools and that’s a very stimulating work as I meet young students all the time that have a fresh mind, and are in the beginning of their life with lots of plans etc. I’m still like a child in that aspect, so many ideas and leads to follow. [smiles] As a musician I guess I’m not evolving that much technically, but a s arranger and as an engineer and mixer and studio guy I take new leaps all the time. Music is so much more that playing some notes, I’ve spent my life composing nots as a primary activity.“

What is the most important for you on these new, surprising release of Vintersorg?

„That we dared to follow our hearts and just did the album we wanted to. So many people throughout the years have asked for the part II to the first album, but I haven’t been ready to even think into that direction before. Now, everything just fell in place and we “went” for it. I think people who like the first album will also like this one even if they are not the same.“

The new output is highly charismatic, touching emotional and your - ‚re-invented‘ - voice comes through with immense power and identity … fits very productive to the songs itself. Be so kind and report about the most relevant/interesting things about it! 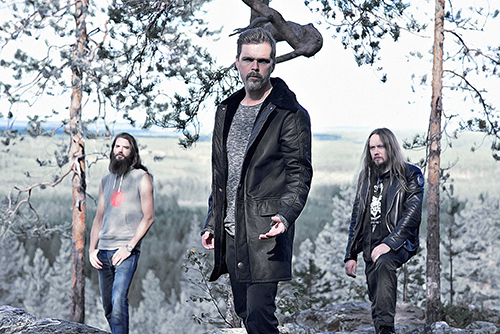 „I’m a sucker for vocals! [laughs] I often have vocals as the main actor when composing songs and then build around a melody or a vocal harmony-segment. I also go for many overdubs and vocal harmonies to get that majestic and epic feel, it doesn’t mean that I like my own voice to infinity …instead I just try to build and paint the songs with a very broad brush where melody have a place in the first row.“

Please tell us about the development of your vocal work for the new album!

„Didn’t do anything special. I think the song material and the melodies made sing like this. I think it reminds a bit of the older vocal style I’ve used as it goes a bit deeper pitch-wise. But still I also think that I’ve developed a lot as a vocalist since back then.“

Please describe the main musical character of „Till Fjälls Del II“ with your very own words!

„As I was writing these songs I didn’t feel that I needed to go back in time and listen to the first album and have that kind of connection. Instead it was just this nice feeling that the song I wrote made me go back in time while writing. Still, it’s very much an album that revolves around the present, where we are at this point in time and what we want to explore musically and lyrically. It has this really strong folk music style painted all over it and that was the only thing that I aimed for, to have a lot of folk music but filtered through the Vintersorg membrane. It’s epic and majestic still you’ll notice very calm parts as well. It’s more of everything that characterizes Vintersorg I would say.“

Which noteworthy (small) differences / elements to all so far known music of Vintersorg are waiting now for the curious listeners?

„Can’t really tell, the album is a journey and it’s certainly an album, not just songs put together to fill an album.“ 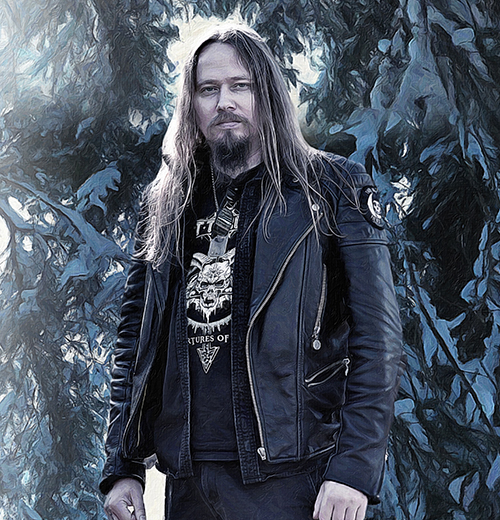 What’s your very own personal view about the ‚spirit‘ of the new album?

„It has a very “Nordic” vibe and a very folk music vibe. It’s ambitious but not pretentious as everything is built by an emotional basis. I didn’t want to write a “smart” album that had all these special features with effects and so on. More done to earth and basic, but still interesting and detailed.“

The new music is extremely emotional, but appears fully genuine … what kind of emotions dominate these songs?

„That must be up to the listener to really say. I know for me the songs are very close to my heart as they are my small “babies” and I’ve raised them with the best of intents. [smiles] You’ll hear big, huge orchestrations as well as really close up acoustic guitars on the albums, so it’s a mixture of feelings I guess.“

Which special visions are raising in your mind while performing these new material?

„That we’ve come back home in a way. We’ve done the full circle, or the full “spiral” as we’ve found a new level in that more “old” Vintersorg region.“

Guess it’s fully around mystical views on mother Nature … be so kind and bring the main lyrical content of the new tracks a bit closer!

„The lyrics revolve around the stuff that Vintersorg mostly evolve around. The connection between Man and Nature. This album is more towards the Nature in the surroundings and not in that broad sense that we’ve taken it on some albums, when we went into the more deep existential matters of Man in the Universe type of thing. Nature romantic but still with an analyze.“ 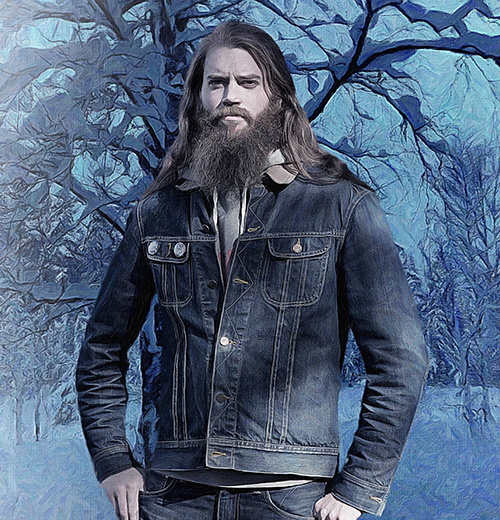 The songwriting process itself … what is to tell about in general - any changes to the past?

„I just write songs when I’m inspired and often writing songs inspire me to write more songs, so it’s like an ongoing thing all the time.“

Guess, you wrote the lion’s share of the new songs?

„Correct. I write all the music and the lyrics in the band.“

„I write songs very quickly when I get into song writing mode. The stuff that takes time is to record, mix and master it as we work on those thing from time to time. We are very busy guys with our day time jobs and family matters. But that’s OK, it’s nice to have a long recording session so we feel that every detail is perfect.“

What have been the hardest or most difficult passages of the done songwriting process?

„The writing was easy but the challenge to live up to our own expectations was the hard thing. But we mannish that and are fully satisfied with the whole thing.“

Please tell about the line-up situation and what brought it into the band!

„It’s me and Mattias Marklund and we worked with each other for so many years, and are child hood friends.Now we have Simon Lundström on bass as a full member as well. A classic trio type of band.“

What still drives you mainly to keep up Vintersorg?

„Passion is my fuel and as long as I have that still inside me I’ll continue.“