As playful as they are catchy and soulful, these from the northern part of Finland make it approachable. Velvet Ocean from Oulu aptly call their style Alternative Melodic Metal.

With the carefully vocalizing voice of front woman Riitu Ronkainen, the songs are sung in a very emotional way, which results in a harmonious overall picture.

Founded in 2015, the sincere lovers of dark, beautiful, romantic moods are now followed by the debut album „Purposes And Promises“ - a not too hard sounding gourmet album to wallow and dream. I talk to Riitu and her husband Jarkko ‚Jake‘ Ronkainen, guitarist and singer.

For what kind of musical ideals stands „Purposes And Promises“? 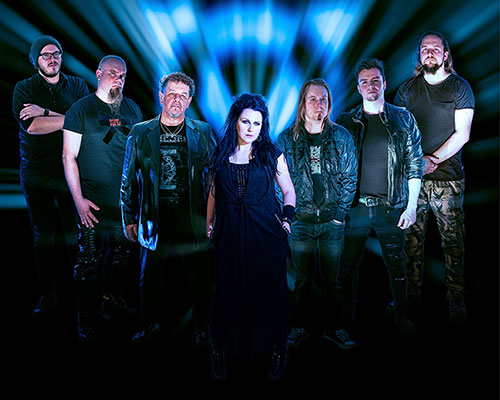 Jake: „When we started the album writing process a couple of years ago we didn’t really have a very clear picture of how the album will eventually turn out. We were both interested in making a Metal album for sure but we weren’t thinking too much what kind of Metal it will turn out. On the other hand we didn’t want to restrict ourselves but just wanted to go on pretty intuitively just to see what will come out if we let the ideas just flow freely. The same way we were also quite willing to use ideas from genres outside Metal music as well. We certainly hope the kind of intuitive approach can be heard as some kind of originality in the finished album.“

Riitu: „For me the most important thing in making music is establishing an emotional level connection between my music and the people who listen to it. For me music is all about how it makes a person feel.“

What is the most important fact for you on these debut album?

Riitu: „For me it was important to have my own music released for the first time in my life. I am very pleased that the album ended up versatile and it also acts as a kind of an introduction to new listeners. I hope the songs convey the feeling they’re made with.“

Jake: „In all we weren’t that experienced writers when we started making the album so I think the most important thing was some sort of a learning process throughout the album making. From the ideas, no matter how great you think they are, there is still a long way to making the arrangements and soundscape the way that you want them to be. I think it was awesome how our skills in many things developed during the process and how it feels that after all the hard work we can ourselves feel pretty happy with the resulting music.“

It feels not less emotional and partly truly touching for me to listen to your songs, a class of it's own so to say - what kind of emotions dominates the new material? 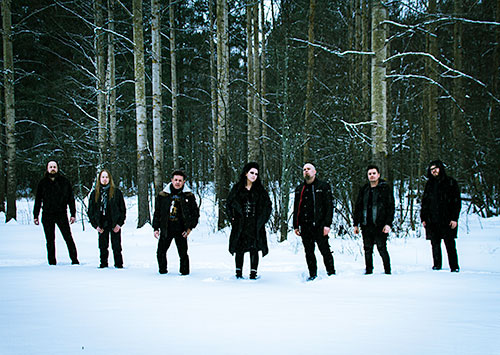 Jake: „I guess the music is quite emotional and also melancholic if you like but I think the sadness you might hear is the kind of bitter sweet quality. There are many things that happen in people’s lives and it can’t be just sun shine all the time. It might be a cliché but I guess you need to also have darker days to see the good in better days. By this I mean that the album is not in my opinion meant to be depressive. It’s a kind of diary of some events in our lives and we hope people can relate to the feeling those things evoked in us and perhaps get something for themselves from it.“

Are you yourselves as soulful souls as the music you make?

Riitu: „Yes, I definitely am. I am very emotional and I live every moment with passion. Of course it also has disadvantages because it can get quite hard at times. Admittedly, it is useful in making songs, because then the emotions are translated into melodies and lyrics.“

Jake: „I think we are both pretty emotional or even quirky in some ways but if you consider the mere songwriting process, there is an important difference there. Riitu’s writing is very intuitive and she kind of sets herself in the right mood and then just starts recording or writing down whatever she feels at that moment. I think she kind of feels the music inside her and just needs to get it out. My own writing is perhaps the opposite. I need to ponder every perspective and form a kind of “mathematical" model of what I’m trying to do. It also involves a lot of trial and error. Of course the motivation behind this all needs to be that there’s something that you want to say with your music.“

I can detect also some hints of Classical/Sympho/Prog Metal - did any of you songwriters study anything like this?

Riitu: „Arto is a professional in classical music and plays the cello in the Oulu Symphony Orchestra. Myself I've started taking singing lessons quite recently actually. I like diversity in singing and I also like extensive use of vocal range. I think I have a pretty versatile taste in music, too.“

Jake: „The acoustic cello played by the Oulu Symphony Orchestra solo cellist Arto as well as the cello arrangements by Harri Österman of course bring a classical twist to the mix. Beyond that we don’t really have much formal training. I have listened to a lot of progressive Metal music in the past so that probably explains the occasional prog vibe here and there.“ 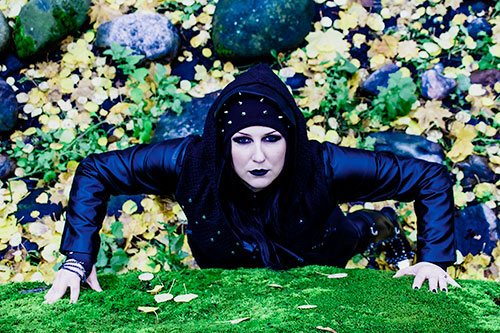 What topics do your song texts deal with?

Jake: „Most of the songs are a sort of mirror image of your mind-set at the moment of writing. There are serious subjects such as death and desperation as well as pondering our whole existence but there are also other subjects involving relationships and the state of the world and the environment.“

Riitu: „The songs are about deception, anxiety, desperation, the world situation. They are pretty melancholic but I think there is still a touch of hope in there. The songs emphasize both my own and also other people’s experiences in life.“

Jake: „Most of the music is co-written by Riitu and me, Riitu being however responsible for the majority of the song material. Of course in the arrangements you can hear a lot of influence from the other players as well as studio musicians outside the band.“

Riitu: „Jake and I often do the songs together. Lately I have been writing maybe a little bit more on my own. However, by working together, we will achieve the best result. Jake is really good at making guitar riffs and it’s easy to come up with new tunes for them. From the beginning of the song writing to the ready album master it took a couple of years. We really didn’t want to speed things up too much but rather spend enough time for arranging and recording.“

Riitu: „For me it was the arranging stage. That was certainly not at all as easy as I might have thought. The alternatives seemed endless and that has en enormous impact on how the song sounds in the end.“ 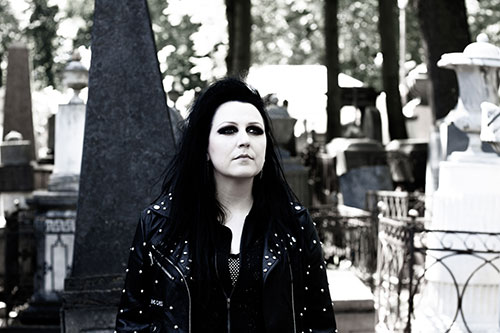 Jake: „For myself I must say that the most difficult part in the album making was not so much the artistic decisions but rather the pretty enormous and time-consuming technical stuff. It was of course also a lot of fun seeing the vision gradually becoming reality but it sure took a toll on my free time. In the beginning it was also a tad difficult to find the mutual understanding in the co-writing with Riitu but I think challenging each other during the process worked to our benefit in the end.“

Allowed to ask you guys about any special musical influences which led to the material on „Purposes And Promises“?

Jake: „I have always been quite versatile in my music taste. I’ve enjoyed classical, jazz, hip hop, rap, rock, grunge, instrumental guitar music and of course a variety of different Metal genres. I guess whatever I’ve heard in my life has had a subconscious influence in my writing.“

Riitu: „I love melodic Metal but I’m not all that restricted to a particular genre in music. I find interesting things in many styles of music. The most important thing to me are a chord progression and a vocal melody that work well together. That’s it.“

In which position between all the countless, similar Metal acts do you see Velvet Ocean?

Riitu: „I genuinely believe that we have our own thing cooking. We’re influenced by a wide variety of music and we’re also pretty special types of people, so I guess that already makes us stand out from the crowd.“

Jake: „It’s true that there are nowadays a lot of bands to choose from. I can’t really say what we could do better than the many other great bands but I can promise that our music is real and honest and we hope that this is what can make people relate to it. I also think that Riitu’s songwriting and perception of melody lines is a very important strong point for us. I also now that there is a lot of other brilliant material left waiting for the future releases.“ 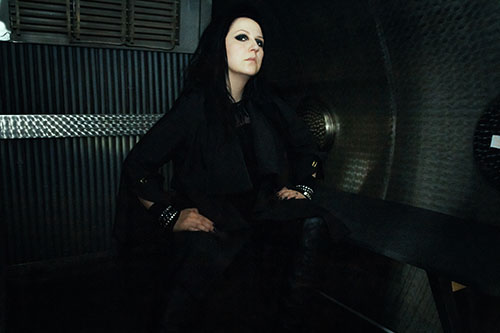 Jake: „I think in music it’s always about fresh music interacting with and challenging the traditions and the household names. In this aspects it’s very interesting to see which direction the Metal music evolves. Unfortunately we’ve been really busy with our own material lately so I haven’t had quite as much time to just listen to music as I would have wanted.“

Riitu: „I tend to listen to some new songs that people bring up for example in Facebook. Lately I also discovered our own artist radio in Spotify where you can find suggestions for new bands. That’s great!“

Jake: „The current situation being what it is I can’t unfortunately tell people to come to our gigs but let’s keep doing music and let’s keep up the forward looking attitude. One day the things will once again be much better. Thank you so much for this opportunity!“

Riitu: „Go listen to our album in Spotify, YouTube or wherever! You can also find us in Facebook and Instagram. You should check out the whole album! It’s best enjoyed as whole. You will find lots of different material and perhaps your own favorite. Thank you very much for the interview! Keep safe everybody!“