"Dawn Of The Nine" undoubtedly shows the Swedish powerhouse of the most musical side ever.

In fact, the exceptionally stable team around the vocalizing bass player Johnny Hedlund had exactly that in mind.

Thus, the new and twelfth album of the Viking Death Metal command, founded in 1989, tramples, snorts and rages in the old-fashioned style. But this time, with a even more valuable equipped kind of retaliation, so to speak.

Chronologically, the four determined protagonists march on the Pagan warpath, on which they carried the 2012 predecessor „Odalheim” into the world: lurid and whipping, Unleashed tell about the post-apocalyptic story of Nordic mythology.

Congratulations to the 12th album, Johnny! Did you ever expected to keep the band alive for over more than 2,5 decades? 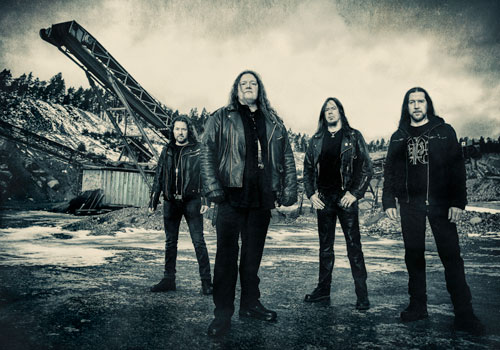 „Hell yes! In fact, I would think we are in half time now. Unleashed isn’t just a band it is a way of life. So unless I stop breathing … you guys have to put up with us creating for stuff through the years to come, haha…“

„… forged a modern Death Metal weapon from the blood and spirit of their viking ancestors…“ - what can you name the main power(s) you get through the heathen heritage of your part of the globe when deeper thinking about it?

„When Unleashed was formed back in 1989, we set out to lead and define the future of Viking Death Metal. We will therefore defend the Viking traditions and values into the everlasting future. We draw inspiration and wisdom from our fathers tales of the past. But we focus on present day strength and determination to stand up straight, and defend the Viking traditions and values. Now, and in the future. As Odalheim presents itself.“

„The vision for the band. As I described above, the Viking traditions and values may change over the years, but only slightly I’d say. As society and life in general change. Musically we are all about keeping the roots, and develop within our own style of music. There will be inspirations coming from elsewhere, but the main content will always be Unleashed Death Metal the way it always was. Somethings change, yet stays the same in many respects.“ 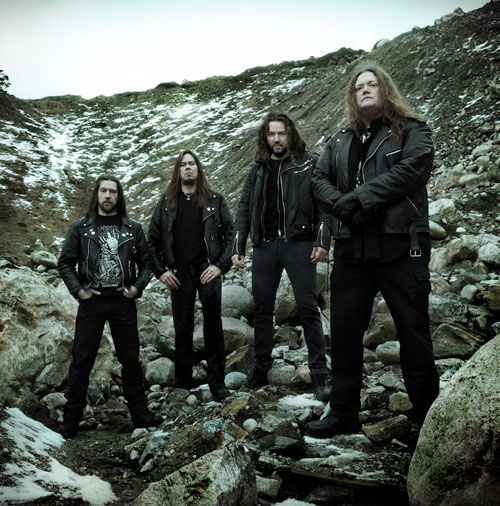 „Odalheim“ came out in April 2012 … please report a bit about the main things which did happen inside the band meanwhile since then! (When I listen to the new stormy stuff, I guess, it must still be a very good and productive chemistry in the horde?)

„Thanks a lot! We have the same process for creating a new album which is about 1,5 years of creations and then we enter the studio for the final thing. Personally I now have a son 4 years old which takes much of my time so I can’t all go about the band any more. There are more things to consider on a daily basis. But that’s all good, and the way life is. The band is still in good shape and we are still as passionate about the band and it’s development as ever. Our aim with every new album is to try and make it just a little bit better than the previous one. Our warriors out there … will be the judges of whether or not we succeeded.“

The newest material is definitely Unleashed’s proven style out of the last years, celebrated with highest playing culture. This time even more varied done and newly even filled with some classic-powerful Metal nuances. But all in all it sounds fresh and on it's own kind. Your own opinion?

„Thanks again!, I agree, I think we have done what wes et out to do on this album once again. The production is a level up … the dynamics is there for sure, drum sound improved a lot and I think perhaps the songs are a bit stronger this time around. But these are very small details though. Let’s see what everyone thinks when it is out in April. So far, only one song is out there and the response has been amazing to say the least.“

Regarding the songwriting of Unleashed in general - any small changes to mention?

„We really haven’t changed much in the songwriting process during the past 14 years or so. The only thing I can think of this time around ist hat we used a different mastering studio (blow out productions) to get some new input. I guess that’s about it really.“ 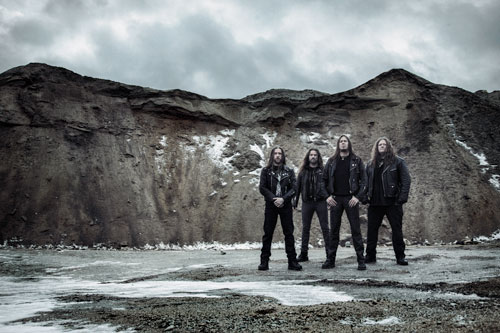 How long did the songwriters need for the complete material of the new album and who are the main composers of these new stuff?

„Same as the past 14 years again… me 100 % lyrics and storyline. Fredrik 100 % music. It took around 1,5-2 years to write the album. And we recorded it during 6 months in the studio. But that just says the time frame. Actual studio time is of course much less.“

Is it allowed to ask you for special influences which led to the new material?

„I think we get influenced by everything we listen to. But like stated before, our priority ist o developing within our own style of music and keeping to the roots. There will always be some small influences here and there … coming from other styles perhaps, Black Metal, Heavy Metal and such, but the main issue is to never let that take over. It needs to sound Unleashed or we have failed. That’s the key. As for the lyrics we now follow the story line of the world of Odalheim, a book I have been writing on for 6-7 years now. So the Viking traditions and values are always there as an influence. And I guess it always will be this way. If we continue the story line I can’t tell but my guess is at least on the next album as well.“

Please describe the main musical character of „Dawn Of The Nine“!

„Viking Death Metal. This is how it is. Plain and simple. And it describes the future of the Midgard Warriors and their ordeals and adventures.“ 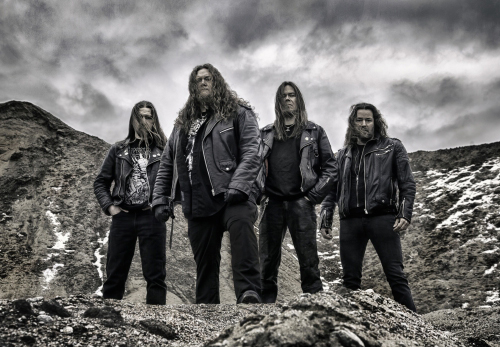 Have you guys felt as in a ‚…Dawn…‘ of the social rotten mankind on a grey world sometimes while the new songs were created?

„I guess in some fashion you are always influenced by the world around you. And the world of Odalheim has a „much“ longer and broader story line than the one I present on the Unleashed albums. Since Odalheim describes a post apocalyptic world, and „Dawn Of The Nine“ really comes in in the aftermath of the great battle of Odalheim, it is pretty natural it should describe the post-war topics covering death and destruction. It may not be so beautiful to look at, and if the feeling is „grey“ at times … I should tell you that the aim of the album is still to prove that there is some hope in the future as well. The rune stone on the cover art work for example has a (self made) rune on it. The rune of courage for the new dawn. It is a combination of the T-rune for courage and the D-rune for the new dawn or the new day if you will. I mean to bring some hope to our warriors for the future battles of life.“

Be so kind and tell a bit about the main lyrical content of the newest lyrics!

„The whole storyline is about the Midgard Warriors fighting to free Svithiod from the rule of White Christ. Their journey to hunt down White Christ and burn his churches, and reinstate the Hammer on the soil where our fathers once fell. In the end of the album, they return to Svithiod shores, victorious and with high hope for tomorrow. And with a new leader, the high commander, the son of Thor. His soldiers call him The Bolt Thrower.“ 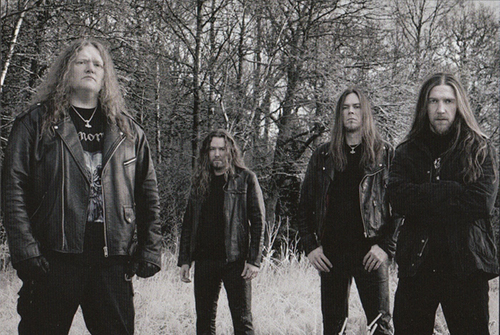 „Dawn Of The Nine“ has been recorded and produced by Unleashed guitarist Fredrik Folkare in his own Chrome Studios in Stockholm - great job, the massive sound comes enormously dynamic!

„Fredrik has produced our music for the past 15 years or so now. And why change a winning team? I think he has proven along the years that he can do anything we need now. Like you said here … we wanted to make a little more dynamic production this time around and to get perhaps a few details like the drums a bit more powerful than last time. It is all in the details now and I think Fredrik did an amazing job putting this to reality. We also spoke a lot about having a big variety of songs and to make them as dynamic as possible. After all Death Metal is a pretty intensive form of music and it doesn’t just to make it with some more dynamic awareness so to speak. I also think there is a great distinction within the instruments this time. It is small differences, I know … but they make a huge impact on how the over all production comes across. Thanks for the interview! Hail Odin!“