In a time therefore, in which the Scandinavian Black Metal revolution was straight in full gear. Out of their hometown came also such illustrious horn-helmet-heroes as well as Enslaved, Einherjer and Thundra. If it closes now in the expanse only half-way with justice, Ulvhedin should be able to extend already quite soon at its respective status and high popularity.

The up-to-date published debut album „Pagan Manifest“ should originally planned already much earlier appear. „Better late than never“ – this old wisdom rarely fits more appropriate than here. For: Ulvhedin have wealth their epic Viking fighter anthems next to large ideas with such an extent powerful instrumented determination that simply renders it impossible to not take notice.

Beside their pretty summoning, urgent guitar work in places is extremely marked and the melodic refrains became formed with thrilling uniqueness. With such high musical quality, one will come according to experience quite quickly into the conversation. As I do with guitarist and singer John ,Johnny‘ Lind. 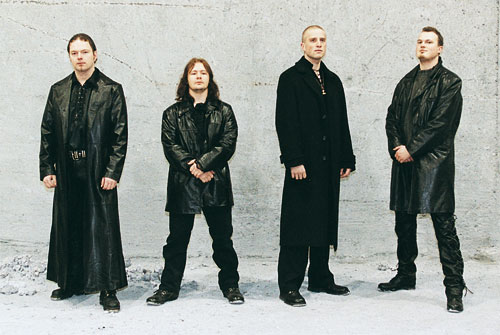 Hey Johnny, please tell your own story as a band, beside the promotional info!

„Ulvhedin was formed back in 1994, when the Norwegian Black Metal revolution was happening. I have been a huge fan of extreme since an early age. The first person to join the band was bass player Helge Gaarder. He and I had already played in several bands before we formed Ulvhedin. The band where laid on ice for many years because of trouble keeping a stable line-up. It was not until we recruited John Carr (vocals) and Are Gjerde (drums), we got inspired to re-form the band. We made our first demo back in 1998. The demo that was called „Gnipahellir”. Looking back, we probably should have waited a bit longer before we entered the studio. Still Native North Records liked what they heard, and offered us a record deal. In 1999 we recorded our debut album „Pagan Manifest“ in Grieghallen studios, with producer Pytten behind the mixing desk. Native North went bankrupt, but fortunately we got an offer from a new label called Einheit Produktionen. The rest is history.“

Please tell the long history of the debut album! Recorded in Grieghallen, and then? The secret-filled story with Native North Records?

„Native North had large ambitions for Ulvhedin, but they where to busy with there own band Einherjer. Being musicians and managing a record label don’t always combine. After a while they went bankrupt, and everything came to a stall. The where some unfinished business with Grieghallen studios, that resulted in problems for us getting hold of the master tapes. After being contacted by Einheit productions, we contacted Pytten and some of the people from Native North, to mutual agreement for getting the recordings released from Grieghallen. This took about a year, but it in the end it all worked out.“

What´s up with Einherjer, why they have decided to quit as a band? Your own opinion about Einherjer?

„Einherjer was a good band. I played bass at some of there concerts, and got a lot of live experience thanks to them. I think they quit because they wanted do something completely different that would not fit under the Einherjer logo. I heard some of their new stuff and its really good! You won´t be disappointed.“

Which are the best Viking-, Heathen- and Pagan Metal bands at the moment to your mind?

„We are a big fans of Enslaved and Primordial. Both excellent bands!“

Please describe yourself and your bandmates with a few words as individual persons and characters!

„We are just three individuals that share a common interest in making Metal music. We have evolved naturally over the years, and I guess where a more open minded now then we used to be.”

What musical ideal led Ulvehin to the artistic decision, to perform such extremely hymnic and melodic Epic Viking Metal for the glorious debut album?

„Its hard to say, but we have always been found of extreme Metal. We didn’t want to be another Satanic Metal band, so we decided to do come up with something new. Back in 1994; if was the start of the new Viking Metal band era. Since we where not depressed devil worshippers, the Viking Metal concept did seem more appealing.”

What do you think, which way would have been developed the Nordic culture without all the coercion missionary activity of the Christian religion?

„Well its not much left of the original culture. It has more and less vanished under Christian rule, with few exceptions.“

Who out of the band wrote the most songs, and who wrote such overwhelming medieval melodies and thrilling arrangements?

„Musically we get inspired from some of the early Norwegian Black Metal bands like Darkthrone, Emperor, Immortal, Enslaved, to the more traditional Metal bands like Iron Maiden, Venom, Celtic Frost. A close friend of the band who has studied the subject of Norse mythology for many years, wrote most of lyrics.”

As it seems, you´re very interested in ancient Nordic and Viking cultures. In which ways do they inspiring you? How much?

„Well it inspired us musicians and artists. We always had a interest for our Viking ancestors. There are so many fascinating things about the old Norse mythology, and all those ancient tales and myths. It’s like discovering a new word. Its our way of showing our ancestors the respect they deserve. Hopefully this will also lead to others getting inspired to discover their own roots.“

Do you wish sometimes to be a Viking or a Northman in the ancient times?

„It would be interesting to go back for only a couple of days, and see what it was like, but I would miss all the luxury of our modern society. But: No Pizza, no internet, no cell phones? I don’t think so, haha.“

What has the new album title „Pagan Manifest” to mean?

„We choose that title because we felt the album was more and less a manifest of the heathen way of life. It represents the many accepts of the heathen society, and the wisdom of a forgotten era. Therefore it was the perfect title.“

Please describe the main lyrical conception of the album!

„The lyrics were written by a close friend of the band and most the lyrical concept is based on interpretations of older Norse beliefs and myths. The Viking theme is sometimes used as metaphors for our own personal experience and feelings.”

Does exist a connection between the lyrical content of „Pagan Manifest” and all the fatal mistakes within the modern world?

„We didn’t intend for it to be, but I guess its possible to interpret it that way.“

Which feelings do you wish in the listeners minds while they listen to your music?

„I think this is an album where the listener will discover new things for each time they listen to it. Hope they get as much enjoyment out of it, as we enjoyed making it.”

Plans for the next months?

„We are currently working on new materiel for our next album. Look forward to getting back in the rehearsal room, make more music, and maybe do a couple of gigs. Hopefully we can do a small tour of Europe in the near future.”