Guitarist and vocalist Heri Joensen and his loyal team demonstrate once again that they are a brand in itself.

The upright as unswerving Faroese idealists-troop goes exalted to the start with the new and sixth album „Valkyrja“, which is audible filled with much self-esteem.

From a purely stylistic, nobody among all the listeners need to expect any strange experiments currently.

But the island souls Týr bring on the current successor to the 2011 blockbuster „The Lay Of Thrym“ again an unusually broad and positive diversity of ideas, making their new seafaring hymns well worth listening to as well as sustainably inspiring.

To my mind, „Valkyrja“ owns primarily a timeless and catchy character, what I prefer, when it comes to such music. Your opinion about?

„I always preferred to write music without any clear trend, so I'm obviously glad you think so.“ 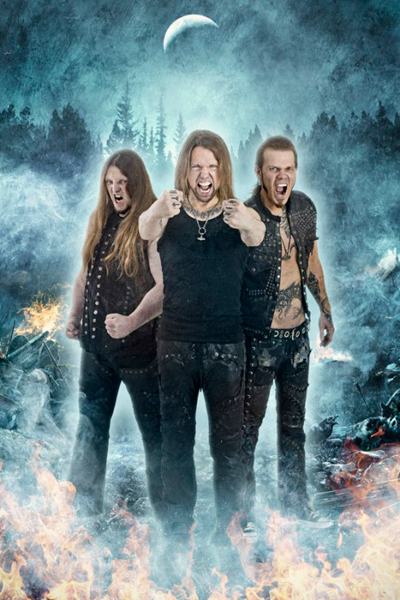 Please describe the main musical spirit of the new album!

„It's somewhat the same as it has been the last few albums. We're trying to make the songs more listener friendly, a bit shorter and straight to the point, but still keeping our musical integrity. That's what we think is necessary if we are to make any kind of living of this. But there are some changes, the drums for example, and with that, the tempo also. This album has some of the fastest songs we have ever made.“

What is your very own personal artistic view of „Valkyrja“?

„I think think we made a really solid and culturally pagan album this time.“

Which small differences to the previous album are waiting now for the curious listeners?

„The most noticeable difference is definitely the drums. George has a much more versatile style than Kári and he took the whole thing to another level all together. Terji got more involved in the songwriting this time and that also puts a new angle on some of the songs. We also have some guest vocals this time, which we've never tried that before, so that's a new for us.“

Special musical influences to hear in the new material?

„For me it's just nordic traditional melodies, put through the usual mill of music theory. It's what I love to do and what I think I do best.“

Which is personally your most important album of all times?

„Hard to choose one, really hard. I think I'd have to say ‚The Final Cut‘ by Pink Floyd. But I'd have to mention ‚Dehumanizer‘ by Black Sabbath as well.“

Please tell about the main content of the lyrics on „Valkyrja“!

„It's a very woman oriented album. It's a very loose knit story line of a man, an anonymous warrior with a silly need to play the hero. He leaves his earthly woman to go and die with glory in battle so that he may be carried away by a Valkyrie and be taken to Freyja, the norse goddess of, among other things, sex.“

How much time took the complete songwriting for „Valkyrja“?

„Some of the basic ideas for songs were left over from ‚The Lay Of Thrym' although most were written within the last two years. But the most part of the detailed work on the songs was done in the few months leading up to studio and even in studio.“

From 1998 to now - what goes through your head when you think about it? A nowadays unusually long period of existence!

„I think we have come some way, definitely, from the most unlikely of backgrounds, but there's still a long way to go and I hope we'll go all that way.“