„Thousand years ago our people here believed in ancient gods such as Tórur, Óðin, and Loki – and some revered at that time also a further overfather by the name of Týr, the one-armed war god”, explains guitarist and throat specialist Heri Joensen the meaning of its Pagan Viking Folk Metal group.

And Joensen, known in the art as a mastermind of (open)hearted and fortunately increasing successful Faroese music bound of men named Týr, has finished the new studio album „Land“ with his assiduous historian metallers.

For this time, master Joensen and his playful island blokes have also adopted some highly interesting cover versions, which are based on old, traditional songs.

And again the powerful instrumented and with strong rhythms done mix of classy, traditional epic poet melodies, Viking'ish fighter choirs and a good dose of timeless, vigorous Heavy Metal in the classic style impresses on „Land“.

The new plate joins with its sonic appearance seamlessly to the previous work of the group, and can thus be regarded as 100 % authentic, 100 % Týr precisely. 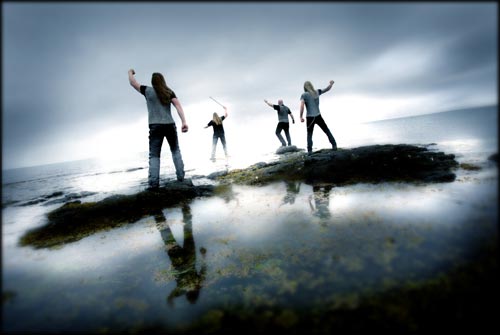 Heri, tell a bit about the cover-versions of the old traditional songs on „Land”!

„They are the usual Týr style, and there are about 5 of them on 'Land'. The intro for the album, probably the most unusual, is arranged over an old recording of a Faeroese traditional. I've done an arrangement for strings which is played over the ballad, and then I had a Faeroese ballad-singer read a poem by J.H.O. Djurhuus over the whole thing. I sounds very dramatic. The other four are the usual Týr style, with a few verses from a ballad, and we've just added metal. Two of the ballads are chosen specifically because of their heathen content, ballads about Odin, Loki and Hønir.”

Why have been chosen the cover versions instead of completely new songs?

What are your strengths as musician on „Land”? 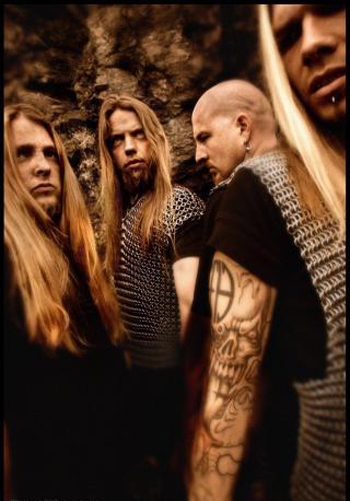 „I think my strength is in the songwriting. And I'm very satisfied with the vocals also, they're a lot more harsh compared with 'Ragnarok'. I think this is our best album so far, but I'll probably always say that about any given latest album, and maybe that's the way it should be. I certainly wouldn't want t release an album while thinking, "I can do better!". That would be very unsatisfying.”

Please provide examples of ideas that you had implemented for the new music of Týr .

„The most prominent idea in Týr is the use of traditionals, directly and indirectly. I've implemented some theoretical ideas that are not usually heard in metal. A lot of voicings in the instruments, and the dominant seventh tension release, which is the driving force of all modern music theory, applied as much as possible.”

Please tell about your proudest achievement on „Land”.

„Land is probably the most epic Týr album so far. I think I've succeeded at incorporating a lot of traditional elements into the music again, as opposed to just keeping it in the vocals, like on 'Ragnarok', and this is definitely the way Týr should go.”

„I like:
- Blind Guardian for their bombastic songwriting
- Dio for the voice and singing style
- Dream Theater for taking Progressive Metal to the next stage
- Judas Priest for helping to invent Heavy Metal
- Savatage for their great stories and concept albums
- System Of A Down for being everything everybody else is not
- W.A.S.P. for Blackie's voice and some very cool songs
- Wintersun for their brilliant technique.”

Who are your biggest heroes among them?

„Dio is one of my greatest musical heroes and idols. John Petrucci from Dream Theater is not a hero but a great inspiration on how to practice and how to get better. Jari from Wintersun is a fantastic guitarist and a very good and perfectionist songwriter, and I'm proud to call him my personal acquaintance and friend.”

Why do you make this kind of music?

„I have a hard time relating to the meaning of questions like this. My first thought is "How could I Not!", but that's not really an answer. As a musician with my relatively rare ethnic background it would feel like treason to my values to try to sound like anybody else in metal. I use traditional Faeroese music because that's where I'm from, I play Heavy Metal because that's what I like and I apply a lot of musical theory because that's what I'm good at.” 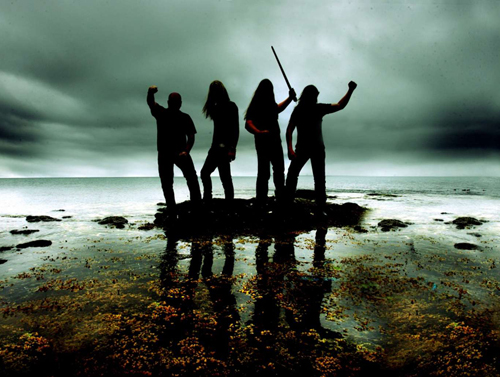 „I would like to find the way to make the music go straight to peoples hearts, and that's hard when there are progressive elements in the music. That often means that people have to think about the music before it sinks in, and then it goes through the head to the heart. I often think about when I first heard the music that really moved me, songs like 'The Final Countdown' by Europe, 'Girls, Girls, Girls' by Mötley Crüe, 'Flight Of Icarus' by Iron Maiden and 'L.O.V.E. Machine' by W.A.S.P., what a completely unintellectual experience it really was, and it's the very reason I undertook musicianship in the first place. It may not be considered the coolest type of music today, but the feeling it gave me as an unsuspecting young man was enormous. I try to think why that was, and why it does not happen so easily again, and how to make that possible with our kind of music. I haven't figured it out yet, and I'll let you know when I do.”

How big do you ultimately want to become in music business?

„I really don't have a maximum limit on how big I want to get, but I do have a minimum limit and I'd say we're still far below that.”

How would you describe the working style for your music?

„We have worked very hard and purposefully for a long time now. We give the music and the band first priority and we agree that we will not stand down for anything.” 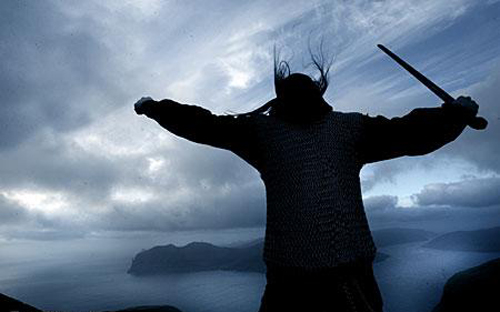 Tell about a time where you had to deal with conflicts during the development process of „Land”!

„I don't think we had any real conflicts during the making of 'Land'.”

What's the last book you read?

Why should listeners buy your CD?

„Because we are poor, and it's good music.”

What can you do for the fans with your newest music that other candidates can't?

„We can give people a taste of truly viking related music.”

When are you most satisfied in your band?

„Every time we were on tour.”

If you would be an animal, which one would you like to be? 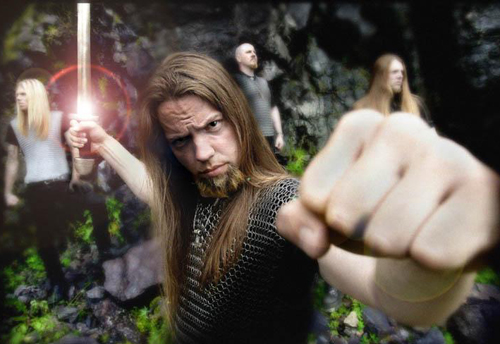 What spiritual ways in life are you still seeking with your music?

„There is no spirituality, only mentality, and I try hard to get the idea of spirituality out of my life and my circle of friends. I seek, also in the music, rationality to prevail in the world. Superstitious and dogmatic thinking are the root of all evil today.”

„The music industry is no place for musicians. I'm glad I'm working with some decent, honest and hard working people like the Napalm Records team. But at the same time I can easily see how young musicians could get lost in the machine. It's a lawless place.”

Which are your lifelong dreams?

„To be a rich and famous musician, guitarist, singer and composer, for the Faeroes to become a nation once again – and for the world to see reason.”