Founded in 1998, the Faroese heathen warriors are not in vain the most famous Heavy Metal band of their water-rich island home, as the new Týr studio album „Ragnarok“ proves.

The predominantly balladesque and slow material of the group was used this time for a lyrically sophisticated concept work.

Thematically Týr dare so in the 'Götterdämmerung' respectively the decline of the old Norse gods. I rowed just short over to the headquarters of the Hammerwielders, where I sat at the campfire together with guitarist and vocalist Heri Joensen.

Hey Heri, please tell a bit about the Metal scene of your city!

How much and mainly what kind of feedback did you get so far from Europe, especially from Germany?

„We have gotten a lot of very positive feedback from all of Europe. Good reviews of albums and gigs. Right now we are on tour in Germany supporting Die Apokalyptischen Reiter and we are surprised to see how many people know the lyrics to our songs and sing along. Also a fair number tell us they turn up only to see us.”

Which specific circumstances and influences led to such a chosen musical style, as yours is?

„Our music style came quite by itself. We have been much influenced by classical British Heavy Metal through our youth and living in the Faeroes you are inevitably exposed to Faeroese and Scandinavian traditional music. Also my musical education makes for the classical and progressive elements of our style. Add that all up and you have Progressive Viking Folk Metal or what ever you choose to call it.”

Regarding your own style of Metal, what do you think of the works of other acts in that style?

„To tell you the truth I don't know very many bands within our style. A few that I know and like are Korpiklaani, Lumsk and Moonsorrow. We have some serious catching up to do when it comes to Viking and Folk Metal.”

Your new album release sounds – in a specific way – typically Týr! What´s your opinion to this? 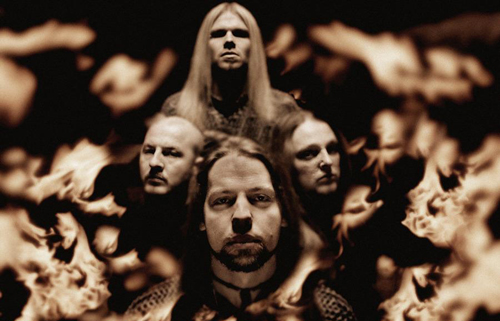 „I am very glad that people think that. An interviewer said the other day that we have a trademark sound, and it couldn't be better. That means that we are not anonymous sounding and that we have made something new. What can I say, that is what I have always dreamed of.”

„Nordic Mythology will always be the issue that fills my mind and inspires me to music and lyrics, but always with an angle on the present day situation. All respect for bands like Iron Maiden and Manowar and such, but I would never write a text like Alexander The Great which is nothing but a citation of historical events. History is a very useful to reat the future based on the present.”

Please give a short description of the composing process for the new album!

„The main outline of the songs were written over the three years before studio. We begin with the vocal melodies and the cord progressions and the bass line. Then we add some variations in the guitar arrangements and rhythmical finesses to make it interesting and challenging to play. The lyrics is the last thing to be written, but through the whole process I make notes for each song so I have an idea from the start what each song is going to be about. Studio was in fact postponed twice because the material wasn't ready and the deal with Napalm Records wasn't closed.” 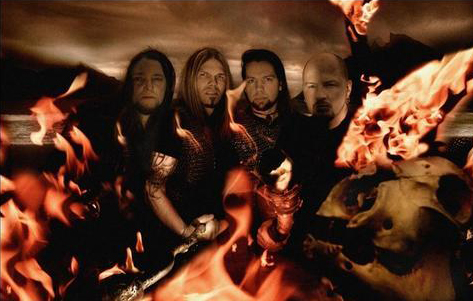 Please give information about the lyrical contents of the new songs!

„The entire album is about the Nordic version of the end of the world, Ragnarok. I have put emphasis on the conflict between Odin and Loki and their killing of each others sons. It is a detail that I noticed when I was reading up on the subject. It is a well known story that Loki tricked Hodur to kill his own brother, Baldur, with an arrow made of mistletoe. But the story of the Aesir turning one of Loki's sons into a wolf and have him tear his other son apart is less well known, but in my version it is Odin's revenge for the killing of his son. It is a building of conflicts that ends in Ragnarok. ‚The Hammer Of Thor‘ is about how Thor got his Hammer with some thoughts on present day warfare and weapon industry. ‚Brother's Bane‘ is the killing of Balder. Loki's envy and Odin's rage with some thoughts about what evil really is. ‚The Ride To Hel‘ is about when Hermodur rides to Hel to revive Balder. Some thoughts about the finality of death. ‚Torsteins Kvæði‘ is a Faeroese traditional with a story much too complex to explain here. ‚Wings Of Time‘, about the meaning of life. ‚The Hunt‘ is the chasing of the Aesir after Loki. Loki's thoughts about the Aesir as he hides in the mountains awaiting his own downfall, just like another present day terrorist who hides in the mountains from those who hunt him. ‚Lord Of Lies‘ is the rage of Loki when he is bound to the ground in a cave as revenge for his ill deeds. The question is, does imprisonment really improve criminals or does it just make things worse? ‚Ragnarok‘. Odin has know since he drank of the well of Mimir how all things would end. None of us go around knowing our own end, but we sometimes despair because we think we can see our own very bad future. We don't know the future so there is always hope, but Odin knew his future and still he tried to prevent the end of the world. The parallel is that we all die someday and we know it, but that shall not stop us from living the time between our birth and our death.”

How do you feel, when you think about all the people, which are listening with much joy to your new songs?

„I feel honoured and I get a sense of achievement. I feel very pleased with myself and I want to continue on the path that we have set.”

„We have two more albums in the contract with Napalm and we want to do a lot more touring.”

„I will miss seeing Steve Irwin on TV, rest his soul. Don't focus too much on the names of music styles, don't let your musical mind be dictated by boxes for music, but try to unite Metal.”