The really brilliant band was originally formed in December 1994. One year later, they released their 1st promo tape „Black Crown”, which was more primitive styled Black Metal. After some line-up changes, Tyrant released a follow-up promo tape entitled „Under The Dark Mystic Sky”. It sold about 600 copies and was welcomed by the fans of atmospheric Black Metal.

Tyrant´s basic music style was formed at that time. 1997, they started to record their magnificent debut album „Under The Dark Mystic Sky”, one of the very best albums in this genre from far-east until that time. It was released by Pulverized Records from Singapore.

In 2000, Tyrant closed a record deal with Displeased Records. The band began to concentrate on writing and recording their new majestic and epic Melodic Black Metal opus „Legend“, which was released in 2002. „Legend“ is still running very, very often in my player – a timeless gem and a real classic! All my questions were answered by hell-vocalist Keisuke Kubo.

Keisuke, in which city are you guys located?

„All we are from and live in Yokohama. Maybe, almost all of the readers don’t know that city. Here, Yokohama is quite near from Tokyo. It takes thirty minutes from here to Tokyo. Here is one of the biggest cities in Japan.“ 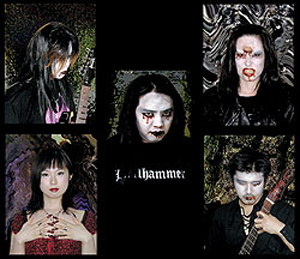 Does exist a Black Metal- and Metal scene in general in your area?

„Do you mean „there“ Yokohama? If so, I don’t know at all. As I said above, here is quite near from Tokyo, so a band from Yokohama acts in there. In Japan, you know, some famous Black Metal or ex-Black Metal bands exist, such as Sabbat, Sigh, and Abigail. Of course, there are many local Black Metal bands here that release only demo tape. Talking about all kind of Metal bands without Black Metal, there are many bands, such as Osmose act Ritual Carnage, King’s Evil, Terror Squad and more.“

Which style of Metal is most popular there?

„As long as what we call, „Underground“, Thrash Metal is most popular here in Japan. I love, of course, Thrash Metal, and some great Japanese Thrash Metal bands exist here, but I doubt some bands are the followers of Thrash Metal trends. The bands in which there is the main composer who knows 1980’s Thrash Metal movement, is real bands, I think. I am not interested in the band which does not have that composer, at all. About ordinary listeners, most popular music is, I think, melodic Speed Metal.“

How is the feeling within the band these days?

„Very busy with the new album concepts. But it is really our joy. Nothing changes after the release of „Legend“. I always think that do the best for my band and my music.“

Please describe yourself as a person with a few words!

„Lazy (haha!). I need the vacation after the recording. Now is just the end of that.“

In which age did you start to sing – and why? Under the influence of which bands?

„I’m not singer, you know, but crazy screamer. Originally I played the bass guitar, and form the band, Tyrant, but there’s no singer whom I’m satisfied with. So, against my will, I have to sing. And then Masato, our bassist who plays it much better than me take part in our band. I lost my job in my band. From then I sing for my band. It was my first experience to sing in a band. Influence? Some 80’s Thrash Metal and 90’s Black Metal, maybe.“

The sound of Tyrant sounds totally orchestral. How has your classic influenced Symphonic Epic Black Metal developed since the beginning of the band?

„Symphonic? Are we? If you think so, you will be surprised at next album! Formerly, we learned classical music in my childhood. I, Keisuke and Ayumi, the keyboard player, did the piano. Masato, the bassist did electronic piano, and Yoshi, the guitarist did the classical guitar. So, it is quite natural for our music to be what it is. The point of change of composition is to use the keyboard when we compose. Before it we did the guitar, but it is really difficult for us to compose only by the guitar.“

What is your definite goal with the music of Tyrant?

„Real symphonic extreme Metal band and music for those who love our music.“

How did happen the contact with Displeased Records and the record deal?

„Pulverised Records which released our debut could not keep us because of some problems. Of course we really aapreciate them, but they betrayed us on some problems. When we were in those troubles, Displeased got contact with us. It was a pity that we could not sign with them because of the contract with Pulverised. After we negotiated a settlement with Pulverised, we contacted with Displeased Records, and did the record deal.“

Do you feel satisfied with their work and their way to promote the album to date?

„I can not judge it here in Japan. Because we do not know how they work and promote in Europe or America. Maybe they did the good work for us, I believe.“

How successful does run the current album so far and how have been the reactions so far?

„I don’t know how many albums have been sold. I think the success for the band like us is that there are not many, but some (sometimes only one) who love our music. It is really happy for us to get the mail from enthusiastic just like you (I really appreciate you, Markus). It is more or the most important that some people want to listen to our music all over the world where we don’t know than the high estimation on the some major zine. Of course many enthusiastic came to me. Thanx a lot for you and them!“

Does exist a lyrical concept behind „Legend“, and if yes, which one?

„No, but I wrote it as the dark image. Only fifth track, „Tears Of Purgatory“ is written about the atomic bomb and tragedies on Hiroshima.“

What exactly has „Legend“, the album title, to mean?

„It just means Hiroshima. Remember the tragedies when the atomic bomb falled on Hiroshima.“

Are you guys satisfied with the frontcover artwork of „Legend“, done by Joe Petagno?

„Of course! He painted it as we wanted perfectly.“

What has it to mean?

„Evil(s) in our mind on the sky over Hiroshima.“

„Legend“ sounds very, very epic! But also technical, mainly reagarding amazing guitar-work, and a little progressive, too. Do you agree? What´s your opinion?

„We all agree your opinion. I and Ayumi compose the song framework and Masato and Yoshi, who play the progressive Rock band, did the detail. So it is not mystery for you to feel our sound progressive.“

„We must admit classical influences. On the next album, more and more classical music is there!“

The marvellous contribution of Ayumi Kubo on the keyboards is breath-taking! How long does she play?

Which were (and still are) the main inspirations for the music of Tyrant?

„The darksides of our mind. Of course we never think those things everytime, but we are moved by those things... We want to manifest those through our music. I think there are two ways to manifest those: rage (or madness) through music and sadness through it. We manifest the sadness. Of course, one of the inspirations is great music such as classical music, Metal and progressive Rock...“

Which classical composers influenced the songwriting on „Legend“?

„Bach and Mozart, maybe, whom we love everytime.“

To my mind, Tyrant are one of the very best bands in Epic Symphonic Black Metal at all! How do you see yourself in the worldwide genre competition?

„We are really happy, if you think so, but the better symphonic bands are there all over the world.“

Which may be the deeper philosophies (if they exist) behind Tyrant?

„Play what we really want to play. All we are not anti-Christian like some typical Black Metal bands and not Christian because there’s no Christian culture here in Japan. „Play What We Want To Play“ is our philosophy.“

Which were your early idols out of the Metal scene? Which ones have influenced your style of singing more or lesser?

„Bathory, Tom G. Warrior from Celtic Frost, Tom Araya from Slayer and Mille from Kreator. My singing is really influenced with their singing and music.“

Which bands do you listen to nowadays? I suppose, you´re an open-minded music listener.

„From next June, we enter the studio to record our new album and really hope to do the gigs for the new album.“

„The darkside of our mind. All accidents without natural accident such as earthquake or storm do not occur without it.“

„Compose the great songs and do the gigs in front of many people.“

Your biggest disappointment so far?

„Lose the data of the new songs (of course we re-do it!)“

Any last words for the fans here?

„I (we) really appreciate your support! We are looking forward to seeing you at the gig. Buy our 3rd album! It will be really symphonic extreme Metal!!! And thank you, Markus and Metalmessage zine!!! See you again!“