When lead vocalist Christian ‚Chrileon‘ Eriksson strikes his trembling octaves with all theatrical fervor in the Epic Melodic Power Metal of this Swedish legation, ​​then one can hardly master oneself as a devoted lover of such sounds.

Finally, the song material of Twilight Force on the second album „Heroes Of Mighty Magic“ has become irresistibly hit-melodic and fantastically festive.

The sextet, which was formed in 2011, titles its sound-coloring and fairy-like style perfectly as Adventure Metal. Stylistically not so far away from the early shine of the well-known Italians Rhapsody Of Fire, Twilight Force also have a variety of classic cross-references in the repertoire, which is often extremely high uplifting. 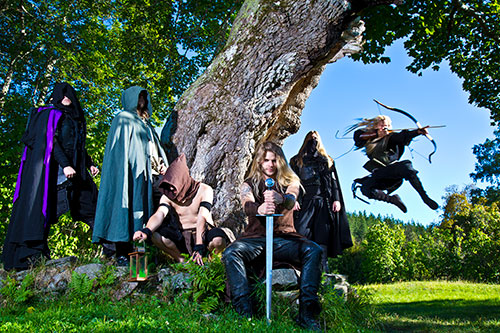 How does it feel, to have finished these new collection of songs?

„We feel much relief and satisfaction indeed, but we also experience a touch of emptiness. It has been a very long journey, and so much of our time, souls and magic has been invested in the making of the album. So naturally, now that everything is completed, there is a lurking void within our hearts. But, there is still much work to be done, new horizons to discover and distant lands to conquer, so there is no time to rest. We shall forever strive onwards, for the glory of the Twilight Kingdoms.“

„Heroes Of Mighty Magic“ - what concept is behind these album title?

„The album title is a declaration of honour to all that rests beneath the banner and lore of the Twilight Kingdoms. It acts as a conjunction for all the tales we tell, and connects the stories under one single standard. And in addition, it is undeniably our tribute to one of the most timeless and entertaining interactive experiences in modern time.“

Rhapsody Of Fire seems to be the main inspiration for Twilight Force, isn’t?

„Well, yes and no. The first two albums of the original Rhapsody (and also that of Luca Turilli’s) definitely had a big impact on us all back in the golden days of the genre. And we have indeed carried that influence with us for all these years. However, we would suggest, and personally feel, that we have left those strictly classical and “baroque-esque” musical influences somewhat behind, and migrated towards a more motion picture-influenced tonal language. More of a contemporary orchestral sound, if you will. But with focus on the melodies and not the orchestrations.“ 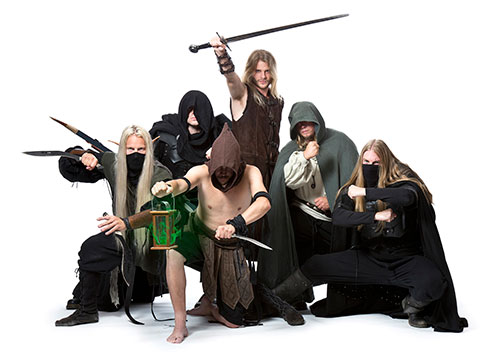 Some other influences to mention?

„We do take influence from most things. The world around us, experiences and emotions, but also power from the depths of our hearts and from ancient magic tomes. So our influences are numerous, and to distinguish specific such influences would be a chore indeed. But we work hard to embrace the flow of magicka around us. There is music everywhere. In the trees, in the stars and in the wind; all you have to do is listen. When you listen; it will come to you. Sometimes in the form of complete scrolls of wisdom, sometimes like faint whispers in a dream. So, aided by arcane wisdom and archaic incantations, we have taken it upon us to discern the voices in the wind and eternalize them for aeons to come.“

Please describe the main musical character of the new album with your own words!

„‘Heroes Of Mighty Magic’ is a fast paced sparkling adventure across legendary realms and glorious kingdoms. It tells bombastic tales of ancient prophecies, heroes and sorcery. We have worked relentlessly and hard to create an ever-changing, yet accessible soundscape fit for bards and kings alike. We have put immense emphasis on arrangements, to bring out all relevant elements in the musical landscape, and it is a constant and intricate interplay between all the instruments; be it orchestral, guitar or vocal performances. We hope that upon embarking on this journey as a listener, you will experience new and exciting details and peculiarities for a long time to come.“

Which musical adventure is waiting for the curious listeners on „Heroes Of Mighty Magic“?

„The album is a truly diverse and dramatic journey through different soundscapes and mythical tales. We believe that all songs have their own unique character, and can bring something refreshing and intriguing to the listener. And even despite the fact that the arrangements are far more complex and advanced than on our first album, ‘Tales Of Ancient Prophecies’, the songs still puts focus on the melodies and hopefully memorable themes and motifs.“ 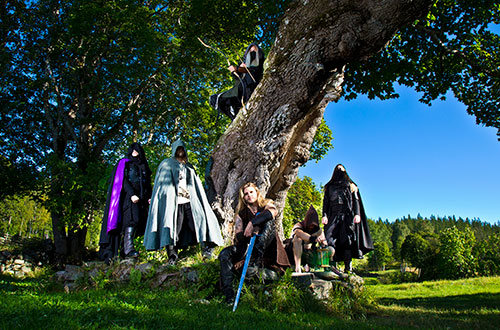 For which musical ideals does stand these new album release mainly?

„Our ideals are difficult to determinate, for our points of reference are rather undetermined and physically vague, yet crystal clear to our minds. Hence, we seldom feel the need to verbally articulate our boundaries and ideals to one another. A simple look, grunt or shrug is often sufficient to get our points across. So there certainly are ideals, but these are rarely spoken of, because they are magically ingrained into our destinies and how we craft our spells and songs.“

How important are epic and strong melodies for the band?

„Melodies are what gives the music its flow and its magic soul. However complex or intricate the arrangements and instrumentations, they would remain nothing without the guidance of strong and apparent melodies or motifs. Without melodies, the music easily leaves but a peripheral experience in your mind, and nothing that imprints lasting memories or begs for revisiting. So yes, melodies are one of the most important elements to us.“

How important are theatric arrangements for Twilight Force?

„Very important. The arrangements constitutes the foundation and shoulders on which the tales rest. And since we wish to imbue our music with adventures and a sense of journey and magic; theatrical, or cinematic if you will, arrangements are what make it all possible. We have worked truly hard to make all the arrangements correspond with the emotions that we wish to convey with each separate creation.“

How long did last the songwriting for the new musical creations? 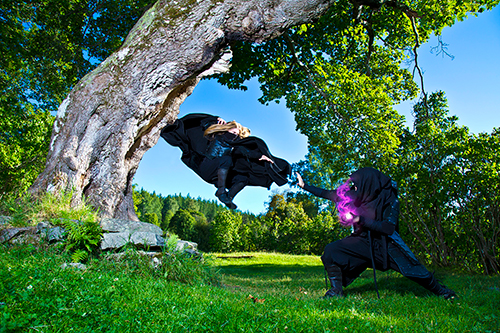 „We began summoning fragments to what was to become ‘Heroes Of Mighty Magic’ about three human years ago. We worked back and forth for a long time before all the arrangements were eventually pieced together. It was a long and tedious, but exciting, process.“

About the songwriting process itself; highs or lows to mention?

„Twilight Force songs are often composed and conjured in one or a few intense surges of creativity. The foundations for a song are laid out rather quickly, but unfathomable aeons of time is spent refining and perfecting the melodies, arrangements and performances. As mentioned; memorable melodies and themes have always been, and will always be, the quintessence and core of any Twilight Force musical piece. The songs are always composed in our studio, the Twilight Forge, rather than in a rehearsal facility. This leaves endless room for experimentation, critical listening and change. Albeit time-consuming, it is a completely unsurpassed way to create music. The lyrics are always written after the music is completed, since we feel the utter importance for the words to fit and follow the melodies. Hence, the number of syllables and the use of correct vowels etc. becomes exceptionally significant to the outcome. A particular lyrical theme for a song is derived from the emotions and inner visions that the song invokes upon us. Read the lyrics while listening, and share and experience our visions!“

Who out of the band wrote the lion’s share of the new songs? 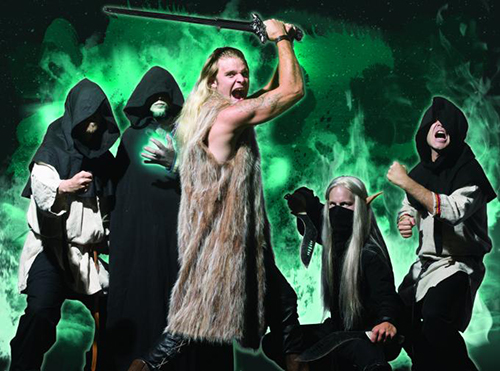 „The compositions on ‘Heroes Of Mighty Magic’ are all ultimately the joint effort of Lynd and me, Blackwald; even though we should probably give Lynd an honorary mention for devising several of the original musical structures. We work out the basic arrangements as well as the orchestral details and lyrics of the songs together, before the final performances are captured and recorded. That way, we are always sure that nothing is left to chance, and that we do not have to revisit and redo too much. It is a magically efficient and rewarding way to create and conjure.“

Song titles as 'Forged In Iron - Crowned In Steel' or 'Frost And Fire' speaking already a lot about the lyrics; please bring the main lyrical direction of the album a bit closer!

„Regarding lyrics; ‘Heroes Of Mighty Magic’ will finally unveil a world filled with mystic prophecies, heroes and legends, and much of what has until today been held in mystery will be unravelled. But, to truly gain more knowledge about the lore and stories surrounding the Twilight Kingdoms, one will alas have to listen to the album, and study the accompanying tales. They have finally been brought into light after many moons of exploration and arcane research through mystic tomes and ancient libraries. The stories will open up a new world of magic, wonder and glory. All the tales take place among the storm ridden mountains, magic forests and windy seas of the Twilight Kingdoms. It is indeed an adventure for all senses!“

Be so kind and bring the cooperation with the guest bards Fabio Lione from Rhapsody Of Fire on 'There And Back Again' and Joakim Brodén from Sabaton on the title track, 'Heroes Of Mighty Magic’ a bit closer! 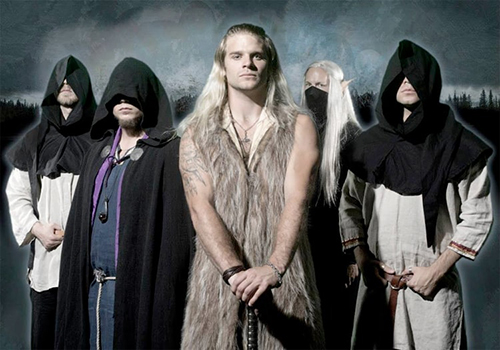 „We are beyond thrilled to have two such venerable titans of the genre contributing to our upcoming opus. We are humbled beyond words. Fabio was, incidentally, on tour with Rhapsody Of Fire at the time, and was about to perform at Sabaton Open Air here in our home town. Thus, the opportunity arose to conveniently record him with very little logistical trouble. We brought him to our studio and played him the material, and his wondrous musicality really brought a magical spark of life to the song. Interestingly enough, only a fraction of the song ‘There and Back Again’ was actually completed at the time of the Fabio recording, but he still managed to embrace the mood and feeling we desired, and we were able to put it all together when the song was finally completed. Joakim and Sabaton are long time friends of ours, and to have Joakim perform on this album too is a great privilege and honour. Ever since his astounding vocal performance on our previous album, we knew that we somehow wanted to incorporate his thunderous vocal resources in the future too. And to our joy, he happily agreed to participate once again. So when the time came, we found the absolute perfect section for Joakim’s voice, and he made that part of the title track take to the skies like the soaring flames from a legendary arch-dragon. Absolutely amazing.“

What counts most for you in making music with Twilight Force?

„The most important thing for us in our creative process is to properly summon the archaic magical forces deeply ingrained in our hearts and light of the stars. Without the proper invocations and transcendental emotions and spirit, the magic is lost and scattered to the powerwinds. We must perpetually invoke the power of the dragon-fathers to guide us on our quests, for that power is what fuels the life-force of our creativity and determination. And so shall it be, until the end of times.“