Many perceive them primarily as the deliciously wacky jokers they actually are. Connoisseurs of the Norwegian bunch also appreciate an outrageously high degree of originality, as well as a top-notch, high-level playing culture.

As a moody bridge from their 2019 album „Norwegian Fairytales“ to the next long-player, Trollfest now give their followers the EP „Happy Heroes“.

Vocalist Trollmannen presents himself as always in a bouncy narrative mood. Asked how such a fun bomb as „Happy Heroes“ can be detonated in these depressing times, his countenance brightens like a sunrise in fast motion.

„I would argue that it is exactly in such times that smiles and laughs become the most important, and our hope is that our songs can alleviate some of the depression that keeps churning around. We sure know it did for us, all the way from having the ideas to completing this we were laughing and smiling.“ 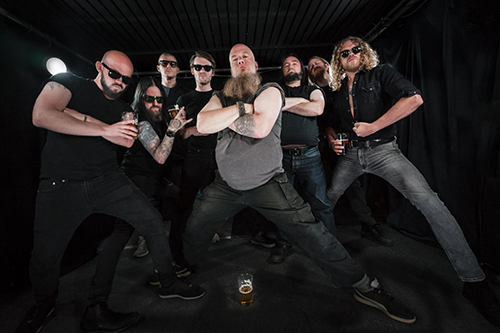 Your famous joy of playing can be transformed even more fabulously this time than ever before - what stuff did you get into to be able to play so lively, dynamic and effervescent?

„I think by the time we started recording this EP, the pandemic had started in full, we had had to cancel our American tour, some had lost their jobs and society was just coming out of the first lockdown in Norway. We had not seen each other nor played together since the streaming concert from Blå so I think a lot of happiness and joy was floating around just because we were seeing each other again. Couple that with the unbridled joy of getting to play our instruments together again and you have all the ingredients for a lovely time.“

What kind of comics and heroes do you personally like and why?

„Herman Hedning is a comic book made by the man who has been drawing our covers since ‚Villanden‘, by far my all time favourite comic book because his humour fits me perfectly. It might be worth mentioning that we were big fans of his comics from a young age and that is why we approached him to draw for us. I also love the Asterix comics and the danish Valhall comics. My all time favourite hero is probably Batman, even though he in many ways is just a rich dude running around beating up poor people.“

What is your most treasured comics magazine that you have had for years and would never give away?

„When Herman Hedning became its own comic book I got hold of the first one ever released, that one is pretty special to me. Also I have all the Valhall comics in a collectors book edition that I love.“

Why this time 'only' an EP? Did you go so wild after only a few songs that your laughing muscles failed the service? 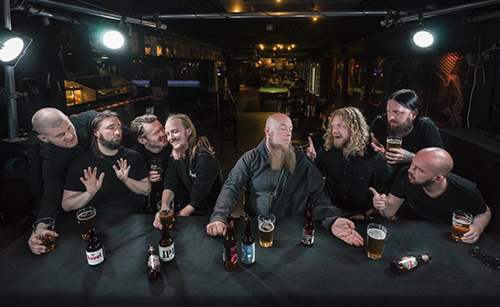 „Good suggestion, and partly true, but it was basically because of the covers. We wanted to do some covers again but didn't feel that it would fit on an album with lyrical concepts and such, and we also had a cool stand alone song lying around so we combined the two and made an EP.“

The tracklist ... just typical Trollfest, haha ... how did the selection of the tracks take place - personal preferences or the blazing desire for overdue 'Trollfestization' of the tracks?

„Again a combination of both maybe, but I think primarily it came down to personal preferences. Each of those cover songs is genuinely loved by at least one of our members in its original form.“

„Don't Worry Be Happy“ - definitely one of your wackiest, craziest and most mind-blowing song monsters so far - just delicious! Do you like the brave and bland original then now at all?

„I do. I think Bobby is one of the most gifted singers in recorded history and I love the feel he has in the original. He might be the most musical person to ever live.“

„Happy“ - what would Pharrell Williams say to your extremely freaky version of his song?

„Hopefully he would say ‚damn! I wish my version was this cool, I should hire those Norwegians and give them tons of money‘, but I expect he will say ‚do you see the extent of my genius! My Pop song is also a Rock song‘.“