Even more diverse, even unlimited, even crazier, and ultimately also even better!

The current successor to the 2012 released intoxication „Brumlebassen“ shows the incredibly reckless madhouse formation so inventive, full of ideas and merry, that it takes the breath away even in the realm of the trolls.

10 years of pure Folk Metal insanity! Did you ever expected such?

„No, we had absolutely no idea Trollfest would still be kicking in 2014 when we birthed the bastard in 2003, but it has been a very good ride so far, so we are not complaining.“ 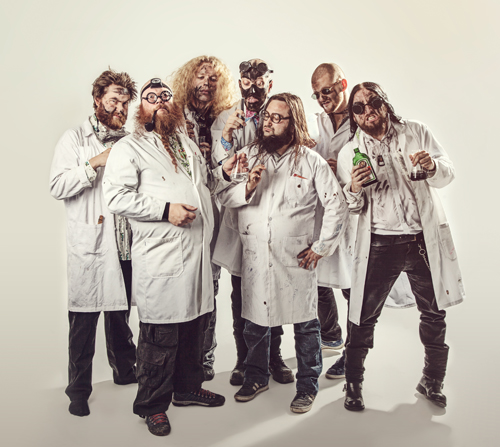 And how do you guys celebrate your grand anniversary?

„We released an anniversary vinyl picture-disc on our own called "A Decade Of Drekkadence" (available at our fine webshop easily found through our home page), went touring in America twice, wrote and recorded most of the new album and went to the shops to get some celebratory cheap beer.“

Congrats to the newest album delivery. What exactly the fans can expect?

„Thank you, thank you. They can expect a concept album both lyrically and musically, that will take them across the world and across time on a ride so spectacular that even Jesus himself said "Thanks dad". We went to a new studio this time around so the sound is a lot more pleasing than before. Technically the songs are a little less extreme than they have been in the past, but the musical intensity remains the same.“

Please describe us the main musical character of your new album!

„The main character of the music is still our true Norwegian Balkan Metal, but we have infused some fresh world music influences this time around. For instance we have some Tango Metal, some Asian Folk Metal, Latino Metal and even a song or two that could be called Viking Metal. It’s basically our typical "Metal band crash-lands on the world music festival main stage an decide to be backing band for everybody" extravaganza.“

How much time took the songwriting for these trollish humorous full-length attack in total?

„Some of the songs were written several years ago actually, while the freshest one is not even 6 months old. We are several people writing music in the band so sometimes something we have written ages ago will fit really nicely along some new stuff we have written specifically for the album. All of us have computers filled with old stuff we have composed long ago, but not managed to finish or make quite as cool as we had hoped. Sometimes when you are stuck it is really helpful to dive into those files and maybe find something and other times you immediately remember something old that would fit perfectly with the new thing you just heard. In conclusion; it is a random and complex process.“ 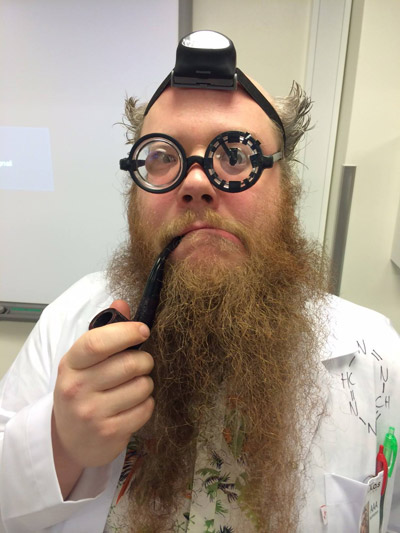 Who worked out the lion's share of the compositions?

„It was Trollbank, our residence lion (and drummer) in the band.“

Is it allowed to ask you as an long-year musician about special musical influences for the newest material?

„It is indeed allowed, however it is not mandatory to give a relevant response so I will say sclythed smingularity vill konstraxit shmeeer hulga bulga. A lot has happened with and for Trollfest since the last album was made; we have met tons of new people and taken part in awesome events. I like to think all of that has inspired us in one way or another.“

Most of the people in Metal think that it's really difficult, to bring something really new and innovative. But you blokes seem to made it once more… Please bring the development of your special sound closer.

„We started off as a Folk Metal band who got fed up with all Folk Metal bands incorporating mostly Scandinavian Folk, even when they were from countries where the Folk music of that region would have been twice as nice. So we thought it would be funny, being from Scandinavia, to play Folk Metal but with the Folk being anything but Scandinavian. I don’t think it’s that hard to be new and innovative, but it’s really hard to be new, innovative and make something great that other people also think is great.“

What counts most for you in making music with the Trollfest horde?

„Our main goal since day one has been to enjoy and entertain ourselves.“

For what or behind which meaning exactly stands the title „Kaptein Kaos“? One can be very curiously for the concept story while listening to your newest compositions…

„Kaptein Kaos is the name of our new troll character. He is an inventor in the troll village and this album is the story about when he creates himself a time machine. Kaos is also Norwegian for chaos and kaptein is Norwegian for captain. Not many troll kids gets a military (and commercial air travel) rank or title for a name, but Kaptein did. Some say that is why he wanted to invent a time machine in the first place, while others maintain he was so named because due to time travel he was already a captain by the time he was born.“

Please tell a bit about the main lyrical content of „Kaptein Kaos“!

„The lyrics in this album are all about what Kaptein Kaos does after inventing the time machine. For instance the first song is about the first thing he does, he goes back in time to before the big bang in order to settle that argument once and for all. Mysteriously though the only thing he can find is a fuse, so he lights the fuse and travels forward in time to taste some primordial soup. Basically everything that has happened throughout history (death of the dinosaurs, fall of the Roman Empire, arms-race, life on earth, etc) can be linked to our beloved Kaptein!“