In the line-up are musicians of crass Black Metal hordes like for example Urgehal, Sarkom and Pantheon I.

And not only the surprising use of highly unusual instruments such as the accordion, banjo and saxophone gives the funny crosshead group a very special status. But also the mega-lively Trollfest songs in itself could not be more distanced from the mainstream. 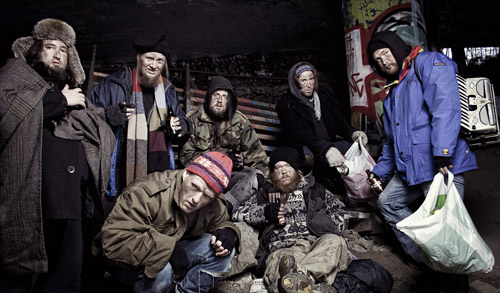 I raise some well filled glasses with bass maniac Psychotroll.

Why you do this at all and what is still the most inner driving force in your creative heart to do such wonderful insane, musical alarm and crazy lyrics?

„Exactly why is not easy to answer, but we started making music to have something of our own to drink to and have fun with and it just kept going. If you pull the fun out of Trollfest I don’t think there’s much left. That our music is the way it is comes as a result of the various musical backgrounds in the band, and our common enthusiasm to experiment and do new things. It’s difficult for me to answer regarding the lyrics, as this is Trollmannen’s domain. What is certain is that there’s a great deal of fun, beer, partying and Trolls in the inspirational universe he has.“

What is the main message of Trollfest?

„I am not sure we have one, but something we tried to imprint on people for some years was "Av mjøden vart du vis og klok, så drekka mer!", which translates into "from the mead you turned wise and full of knowledge, so drink more!". Our more general message is that there's a lot of fun in alcohol and music. Put those two together and you'll have a blast!“

„All of us contribute with songs, but I think it is safe to say that Trollbank has been our main songwriter for some time already. It's impressive how fast and easy he puts his ideas into life. Trollmannen is the man behind the words. The Troll universe he has created is something that impresses us all. Actually, things have a systematic way of falling into place in our situation. We first create a sketch for the song until we are all satisfied, and then we add the lyrics.“ 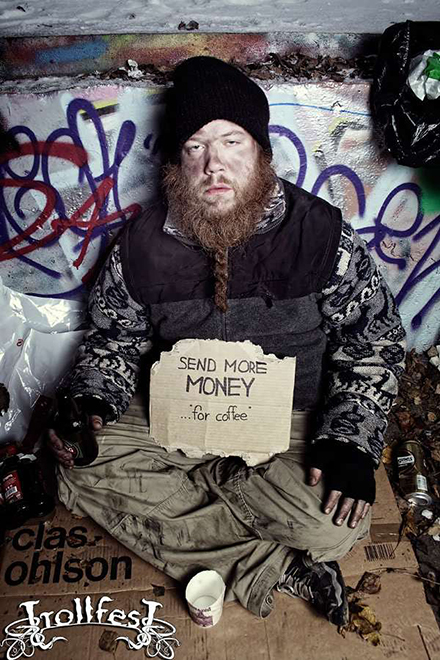 Why the heck do Trollfest use these funny designed, German words in titles and lyrics?

„Trollmannen wanted to add German to the lyrics, but I think it is safe to say that even our collective knowledge of the German language is quite limited (wir haben nicht unsere Hausaufgabe gemacht). Because of this, we needed to find a compromise and ended up with a mix of Norwegian and German. It has its benefits. Adding words from two different languages at the same time gives us a great flexibility in adding lyrical effects, like end rhymes and so on. To make it all even easier on us, the grammar we use is the grammar we choose.“

„Well, it is true that we are Norwegian and we honestly play a mix of music from the Balkans and Metal, so why not call it “True Norwegian Balkan Metal”? The more direct explanation is that we were having a lot of fun with our very own rewrite of the expression “True Norwegian Black Metal”, and it kind of stuck with us for such a long time, that we decided to use it.“

Be so kind and tell about the main lyrical content of „En Kvest For Den Hellige Gral“!

„The content of lyrics from our new album is telling a story, like on the „Brakebein" album. The adventure this time involves five Trolls searching for the Holy Grail. They don't need it for religious reasons, but it is a well known fact that Trolls eat Christians. The plan devised the Trolls is that if used right, the Holy Grail can be used as a "homing beacon" for luring Christians into a trap, thus creating a permanent food supply. First you need to set out to find the beacon off course. The story told on "En Kvest For Den Hellige Gral" tells about the reason for this journey and the journey itself. And if you are so lucky to buy your own copy of the limited digipak version of this album, you will also get the track called "Epilog", which means epilogue. “Epilog” tells the story of the aftermath of the story portrayed on the nine songs on the album.“

Which has been your most drunken moment with Trollfest?

„I've had my share of such moments with Trollfest so it's not easy to choose, actually. But I think it would have to be during Ragnarök 2008, when we played early and just kept drinking throughout the day or while being a recording engineer together with Mr. Seidel during the drum-recording for "Villanden", when we drank so much that it started getting difficult for Trollbank to signal us to start and stop recording. They were both fun times.“

In December last year Trollfest played the „Ich Liebe (Tour Uber Alles) Tour“ with Pantheon I and Finsterforst in Germany. How was these concert serial? 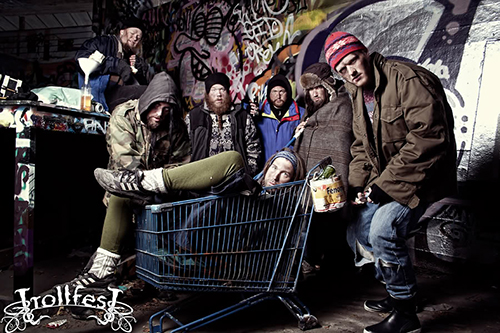 „The tour got off to a bad start with the weather stopping us from flying to Frankfurt when we needed to. That meant that we lost our first concert. We are all really sorry about that, and we would much rather have played for all the people expecting us, than to be stuck at the international airport in Norway. The other shows were all really great, each in their own way. We went from medium sized clubs to smaller venues through our 5 remaining concerts and it was a lot of fun. It has to be said that Trollfest is such a band that we really like to play concerts where we are placed close to the audience. It’s a good feeling to see how everyone is part of the same fun. Mentioning the tour I would also like to direct a big thank you to the guys in Finsterforst who arranged it all. It was great to get to know the guys.“

„We have a lot of concerts coming up this year, mainly in Europe. Some are still being planned, but the ones made official so far, are "Rage Of Destruction Festival V" in Belgium at the 20th of May, and "Metalfest" the week after in Germany/Austria/Switzerland, from 27th of May to 29th of May. We will also have a slot on MetalCamp which is from 11th to 17th of July. For updated information and gig announcements, our official Facebook band page, http://www.facebook.com/trollfestofficial, is a good place to go.“

What's your personal view about the Metal scene in your country and in Europe?

„I think that the Metal scene in Norway is a bit conservative to be honest. To me it seems that they are betting on well established bands and genre-variations and that’s it. It’s almost as if they are afraid to look at something new or different. The scene in Europe seems to be a bit more open to new impulses even though we all know that the music industry is having a hard time.“

„I tend to like my whiskey, and I like it neat. Sometimes on the rocks. The twelve year old ones usually have a very nice taste. Out of them, Glenlivet is a nice whiskey. Out of beer, I am weak for the taste of Czech beer. They have some amazingly tasty beer. Cheers!“