Norwegian Black Metal horde Tidfall was originally created in winter of 1992. A few hard years went by, and in 1998, „The Black Psychotic Darkness”, Tidfall´s second demo, was to be unleashed on sick humanity. This demo was responsive for signing a deal with Nocturnal Art Records for their first full-length „Circular Supremacy”, released in May 2000.

„Circular Supremacy” gained them a massive response in European Metal press and received some overwhelming critics. In the meantime, a new change in the line-up took place, as it became clear, that vocalist and guitarist Rogon D. Bloodgraat wouldn´t fit with the plans that Tidfall had for the future. Bloodgraat was replaced by Sorg on vocals, and some time after Drako Arcane started torturing the second guitar.

After a time of rehearsing the new material, Tidfall headed back to studio and during April through March 2001, they did the „Instinct Gate” recordings at the well known and meanwhile legendary Norwegian Akkerhaugen Lydstudio. 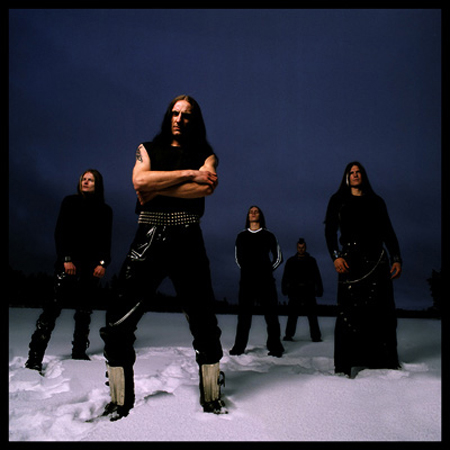 Aftaneldr is very satisfied with the bandmembers as he reports.

„The line-up now counts five individuals. Since `Circular Supremacy` we have changed our vocalist and got a new guitarist. The cause of this was that after the debut album we all sat down and had a discussion regarding which direction the band was gonna take musically. Our former vocalist disagreed so much with the views of the rest of the band that we felt it was necessary do some changes. End of story was that Sorg took over as vocalist, and after some time Drako Arcane joined as a second guitarist. As the situation stands, Tidfall is a band with a consensus on future plans, and are more determined and dedicated than ever!”

Why did you guys change the record label?

„Main reason I think was that Nocturnal Art had planned to have a bit of a low profile for the near future. The cause of this I believe was that Samoth had started a new band and felt that his working-hours got too long. When Samoth called and told us about the situation, we made an agreement that Tidfall could go out on the "free" market and search for a label that had the proper means to release the already recorded new album, with the following work such a thing entails. So we did, got some offers, and the best one came from Nuclear Blast where we are currently signed.”

„To be quite honest I don't really know, because the update on sales numbers has been pretty bad. The last estimation I know of is a number between 3.000 and 3.500. On the other side we got great reception in general in the European Metal-press, so we are quite content with the result.”

Do you look forward extremely about the results from fans and press already?

„It's always exciting to release a new album. Although we do the thing we believe in and compose the music entirely after our own preferences, the time comes when the album is finished and ready for release, and then you start thinking about the kind of reception the album's gonna have. What I'm trying to say is that in the process of writing new material you don't think about it, the thoughts come afterwards.” 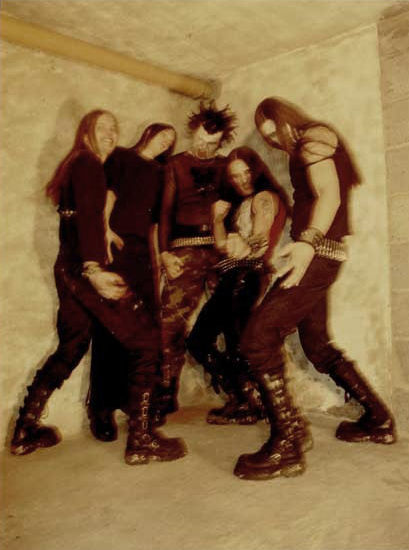 What is the meaning of Tidfall?

„The band name translated in English means something like `the fall of time`. In Norwegian it signifies the moment when time stops, and the philosophical aspects revolving such an event.”

What meaning stands behind the title of the new full-length?

„`Instinct Gate` is meant to give connotations regarding a doorway into the primitive sides of man / mankind. A place where neither future nor past exists, just the immediate in being present at a given moment. Where there isn't time to think, just act.”

Does exist a main-concept or theme on the new album?

„As far as it goes the album has a sort of `physical` concept. Not much spirituality. The primitive, instinctive part of man is weighted, not morals or normatives, or the parts who has to do with the rational or logical aspects.”

Where has been produced the new release?

„The album was recorded in Akkerhaugen Lydstudio. We spent most of March month doing it with Torbjørn Akkerhaugen as producer. Worked our asses off to get it finished, and still it was barely enough time. I guess you never will have enough time in the studio, cause you'll always use the apportioned time to experiment as much as possible, and suddenly you notice that time is running out. But in the end things usually turn out great, and I think it did this time too.” Their composing has been taken some time, but Tidfall can do it also fast as hell. “Some of the songs date back to last year, but tracks like `Mindraper` and `Domination Complete` are written just ahead of entering the studio. In fact the last touch on "Domination Complete" was lain during the recording of drums on the other tracks. I think it turned out as a killer song although the composition period was a bit stressful.”

Who has composed most of the new tracks for „Instinct Gate”?

„The drummer Zarthon has composed the majority of tracks, but Abraxas and myself (Aftaneldr) has composed two and one respectively. Usually we execute the process of composing songs such that one person makes the "skeleton" for a song and then we arrange and give it the finishing touch together. Often the song is recorded for listening and we start rehearse new songs early to get the "feel" of it. During such a process elements that need more work show themselves more clearly I think. When it comes to what moods are best for writing songs, I can only speak for myself cause I don't know about Zarthons way of doing the things he does when he's composing. It goes somewhat into the next question cause it's me who write the lyrics.”

Who wrote the main part of the new lyrics?

„Regarding the writing of lyrics we usually write them each individual for himself. In this case me, although on Instinct Gate I have worked with Zarthon and Abraxas on two of the songs. The closest description I have on the mood I find myself in when it comes to the writing process is "expressional". A state of "in need to do something" with the thoughts and feelings which appear after impressions that triggers your creativity. In my case depression is often the trigger, but I can't do anything when I am depressed, the creative part comes afterwards when the surplus you get from laying in depressive hibernation kicks in.” 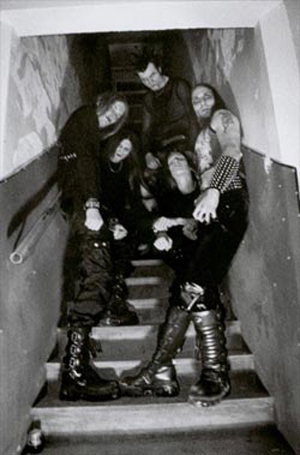 What‘s your own characteristic for the style of Tidfall?

„I like to refer to it as extreme Metal. The cause of this is that the elements in our music I think do not fit into any prior category all at the same time. I think the term extreme Metal is sort of a more generalized name on a kind of music where you don't have to tie yourself to any pre-posted rules. Ok. It still has to be fast as hell and kick ass, after all we are talking Metal here, but lyrically and musically I think this is the most covering genre-term for our music.”

Please explain the songs on „Instinct Gate” with own words.

„`Children Of Man`: First track; a real straight in the face song with a refrain to die for! One of my favourites!; `The Empire Of The Pleasures of Flesh`: A more complex story, some good old school elements with a new twist, makes you wanna bang your head!; `My Wrathful Eyes`: Thrash inspired, a little different than the other songs and therefore I think its good, not to mention its one of the songs which are most enjoyable playing; `Prophecy Horizon`: Good atmospheric opening and the lyrics are great. A massive composition midway in the song and some `right in place` guitar dubbing makes this song one to remember; `Mindraper`: A short brutal affair with maybe the most unexpected song-part of the whole album. Our first song experimenting with such grave use of techno beats. Starting pretty laid-back but bashes you right to the ground when the actual drums and the guitars enter. Another favourite!; `The Instinct Gate`: A song with lots of different elements, some doom and some experimenting disharmonic notes, and a great programmed mid-part with psychotic pianos and strings. Something will happen live!; `For What The Flesh Holds`: A great verse-line building up to a great repeating symphonic orchestration. Nice lyrics and some blasting guitar riffing in the mid. Great song I think because it's got a genuine propulsion; `Domination Complete`: Last song and the newest song we have, finished up in studio. Elements of disharmonic composition and an outro which finishes the album perfectly, makes this a great one I think!”

„Hopefully early next year. Up until then we're gonna promote the album through interviews and web, and maybe do one or two gig's locally here in Norway. Although nothing is cleared with Nuclear Blast yet, we hope to be able to tour Europe maybe March or April, anyway you can be sure we're coming to Germany sooner rather than later!”

Noteworthy plans for the future?

„Currently we are rehearsing the `Instinct Gate` to be ready for touring, and we have also started writing some new material. Probably we will record some of it during December, as an element in the composing process as mentioned before. On the private plane Abraxas and me are attending the university and gonna finish some exams there. The rest of the band is working. A great Metal hail from Tidfall! Hope to catch you on tour. Cheerz!”