Since more than a decade they are in full service of pitch-dark and rapid technical sounds.

Now the dedicated Metal-specialists which hail from the Northern part of Finland deliver with „Travesty of Heavenly Essence“ its newest studio output.

The sprightly sounding album shows the innovative extreme-musicians, who lost its stylistic face in spite of various performed modification until nowadays at no time, again in more playfully best form.

Thyrane triumphing in all eminence with conceivable most fluid overpressure playing. And it seems once more, as the agile Finn in things of exact precision stand similar even to the accuracy of an atomic-driven clock.

Responsible for infernal action are high-energetic agitating rhythm-beats again, as they certainly could not be more typical in its entirely special knocked type for Thyrane. 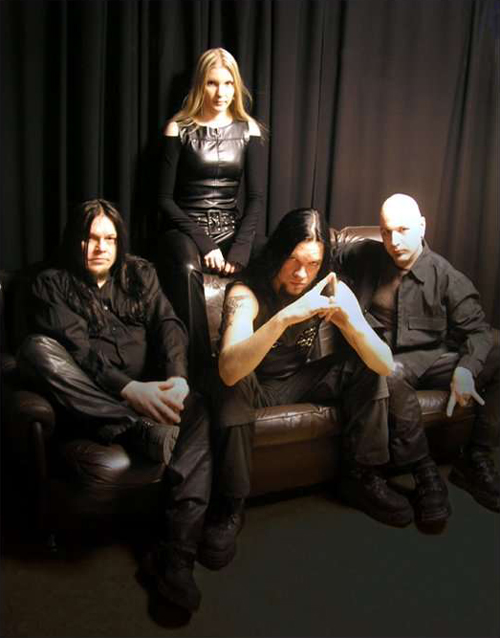 Effortlessly stimulating moods are evoked at the same time through wringing out all kinds of respect keyboard sounds, which fill through its just as impulsive as tasteful productions often the ear-gears like fine pearling Krim-champagne.

For such draws the blond keyboardist Hannamari responsibly, which stood to me for an dialogue.

Hey Hannamari, how are do you doing at the moment?

„Needless to say, we’re anxiously waiting for responses on the new album. The reactions of family and friends have been positive but you can’t really trust them to be objective… We’ve also just welcomed a new session guitarist to the group and looking forward to playing with him.“

Please tell the readers about the changes in the line-up!

„Unfortunately at the beginning of this year, our guitarist Avather left the band after eight years. He is still a close friend of ours and the departure didn’t have an effect on personal relationships. He visited us regularly when recording the new album and even wrote lyrics to one of the songs, “Legacy Of Saints In Disguise”. It took us over nine months to even start thinking about who we would get to replace him. We’ve now found an awesome guitarist to play with us on gigs but so far there is no need for a permanent member to the second guitar. Another change in the line-up concerns KrisTonic, who is now a full-time member. This was an easy decision because Blastmor felt that he wanted to concentrate merely on guitar and singing in future, therefore KrisTonic could take over the drums completely. He has been playing live with us for five years so we know his talent and personality, fits to the band perfectly!“

How runs the current chemistry between the musicians in the band?

„It’s great nowadays since making “Travesty Of Heavenly Essence” brought us closer together. The process of making the songs was different this time and Blastmor, Daemon and I really sat down, played the riffs, listened to each other and so on. This continued in the studio where we all participated in each others recordings. The atmosphere is open and co-operative and this has not always been the case! Having more than one strong mind in the group has caused some trouble in the past but we managed to talk it through and clear the air. The chemistry between us will probably reflect positively on the quality of live performances.” 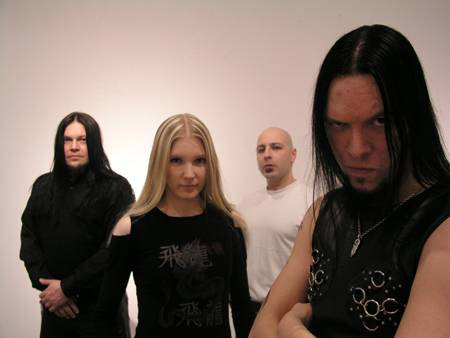 What is to tell in general about the new release?

„“Travesty Of Heavenly Essence” is a 45-minute Black Metal package of eleven songs; versatile drum work, ass-kicking guitars and bass, aggressive vocals, and some synths. What appeals to me most, is the many-sided selection of songs. They are all individuals though they fit together perfectly. For someone who especially likes the Thyrane albums “The Spirit Of Rebellion” and “Black Harmony”, this could well be worth checking out.”

Report a bit about the lyrical contents of the new work please!

„The title represents rather well the lyrical content of the whole album. It is much about opposition to fundamental christianity, and misanthropy. Most of the lyrics are done by Daemon and I, one by Avather and one by Ville Sorvali from Moonsorrow. It worked out well to have several writers since we all differ from each other in the way we write. It brings nice variety to the songs.“

How ran the songwriting and the development of the new songs?

„Blastmor is the mastermind of Thyrane and with the new album he wrote all the songs. He came up with the riffs and the basis for the songs, which we then as a group discussed and edited. The rest of us participated with our own instruments, of course, but at some parts Blastmor already had a clear vision on what the synths and the bass should play. By the time we entered studio, the drums were only in KrisTonic’s head. He created them based on the demo of the songs we sent him. Needles to say, the rest of us were dying to hear what he had come up with and luckily he exceeded all our expectations. He really took the songs to a whole new level.”

The previous album „Hypnotic” was a more catchy one as the new one to my mind. Do you agree?

„I have mixed feelings concerning “Hypnotic”. With minor changes I think we could have made a lot better end result but we did not see that at the time. It’s not as catchy as it could be, but the songs sure work well on gigs! Both “Hypnotic” and “Travesty…” have catchiness to them, it’s just of different type.“ 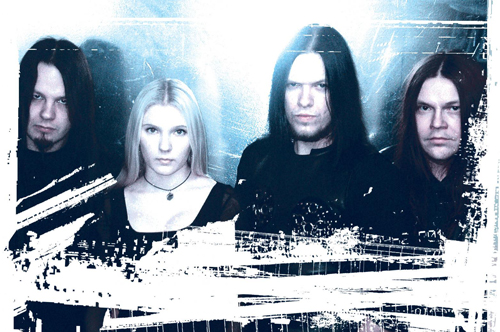 How much are you satisfied now with the new songs?

„Very satisfied, we put a lot of thought into them, to everything from the structure to sound. A lot of songs were also dismissed since they lacked ‘that something’. This is the best Thyrane ever. The only thing that bothers me (and perhaps only me) is the vocal effect we chose to use in “Truth Revealed” because I don’t think the vocals stand out enough.”

What contains a really good song of Thyrane?

„Catchiness and aggressiveness, bunch of groovy riffs, black atmosphere, inventive drums and good melodies. It stands out with its own personality yet having that Thyrane-sound to it.“

The new frontcover art is great! The relationship to the title of the album got caught simply perfect. Who made it?

„The cover art was done by Jukka Rajaniemi and Anu Jalo from Spinefarm. Blastmor is the one who came up with the idea for the title (the phrase is taken from Avather’s lyrics on “Universal Black Drive”) and the idea for the cover art. It takes the stereotypical heavenly image of Jesus in his fancy white dress, descending bright light and clean features to the real world of today. He is presented in a more human way, weak minded and hooked on nicotine and drugs, sitting among garbage and shit in some big city alley. Forgotten and worthless to the rest of the world – as the travesty of heavenly essence. There is an underlying reference to “god made man in his image”. Personally I’m 100 % satisfied with the idea and its realization.“ 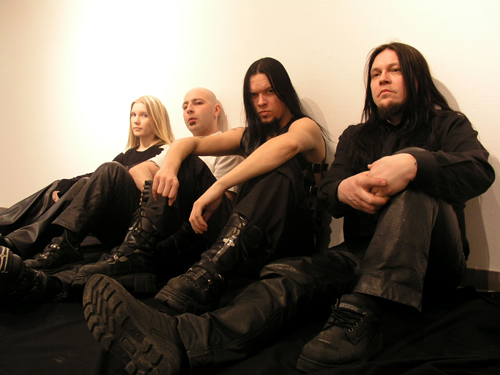 Btw, what do you think about religions in general?

„Everyone is entitled to believe in what they want to, as long as they practice their religions inside their own heads, homes and lives. Unfortunately religions are treated as something bigger than what they are, and that’s when I have a problem with them. It does not fit to my head how a country such as Finland can have such a tight union between church and the government, there is progress but the progress is so damn slow! So in theory I think that religion of any kind, or no religion at all, is everyone’s own business and if it makes them happy, so be it. Only it’s not that simple in practice.“

„The last live show we did was a year ago. After Avather announced to be leaving, we decided to put things on hold when it came to gigs. At the moment we’re getting our act together and looking forward to next year when we will certainly do as much gigs as we can.“

„Absolutely. That is when you get the reward from your work; people come to see you, know your songs, support you and enjoy themselves. Numbers from record sales are just numbers, seeing the listeners - both old and new – digging the music, is a whole other thing.”

What´s special at a show of Thyrane?

„We’ve been many times told that our songs work even better live than on the album, since they have hell-of-a-lot more energy and power. Of course, Daemon’s performance is worth to mention because he is in his element on stage. He alone could run the show while others just played!“ 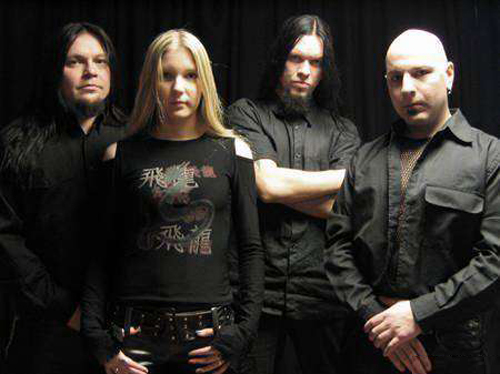 „“The Best Of The Beast” by Iron Maiden, which was after I finally got my first record player, before that I only had a huge collection of recorded cassettes.“

In which philosophy of life do you believe?

„Such a personal, wide and difficult topic to explain. It’s about being myself, deciding for myself and surviving. Sounds selfish but perhaps that’s what it is, it does include the people I love and their well-being. A short answer could be: Living according to my values.“

„I’m finishing off my final thesis in Business Management, and on the side working as a payroll clerk. Exciting, ha? Blastmor is currently studying music technology and Daemon is busy with his family and work. I don’t know what the heck KrisTonic is up to nowadays besides living on the other side of the country.“

„I really hope for tours abroad for Thyrane, and playing on big festivals.”

Your plans for the future?

„As mentioned, we are rehearsing at the time, aiming for gigs and possible tours next year. We’re also making new material on the side but haven’t really talked about the next album in details, though that is definitely in our plans.“