From Kharkiv, the second largest city in the Ukraine, are these mysterious Industrial Folk Death Metal innovators. Founded in 2001, the stable bunch only now presents his second album, mystically titled „Totentanz“.

The successor to the 2005 debut „The Banner Of Victory“ shows Thunderkraft stylistically partly enormously changed. So there is now a richly heaped, hard-steel trowel with Groove Metal cross-references hurled at the eavesdroppers.

In addition, the participants have consciously preserved their passion for atmospheric gloominess and theatrical inlays. As guitarist Master Alafern knows to report, the conspiratorial quartet intended that the „Totentanz“ should contain some very experimental steps.

The new release „Totentanz“ - what is there primarily to report, also about new facets of your music?

„Our new album has quite original atmosphere and has a lot of unusual and “colorful” moments. In arrangements, along with the basic for Metal music instruments (like guitars, bass, drums) we have used symphonic orchestration techniques and elements of electronic music. To reach our creative goals we have also recorded live instruments – violin, flute and saxophone. This album is of experimental nature, working on it was a pleasure for us and we got with this work priceless experience. Listening to our songs more and more the new facets of the music show up which makes the same song to sound differently each time one listen’s to it.“ 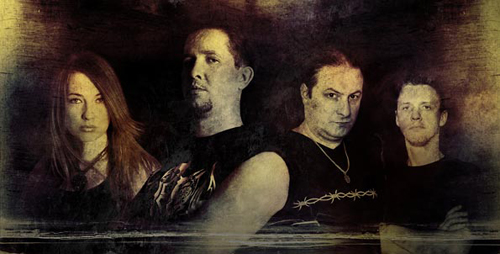 What can Thunderkraft do for the fans with your upcoming music what other candidates can't?

„We play quite unusual and diverse music which combines the power of Death Metal, Industrial rhythmic/atmosphere and folklore brushes. This combination of Metal, electronic music, symphonic arrangements and folk episodes truly makes our music to be very unique in a sense, and that was proved by many reviews we got for this album. Also we use the combination of live instruments (like mentioned above flutes, violins) in a non-standard fashion – they take their place in the most extreme parts of the album and this way we prove that these instruments can create not only lyrical atmosphere but also enforce the dark side of musical material. In our creative work at the same time crossed different threads of macrocosm. Each listener will find a reflection of his/her emotions in our music, almost any emotion is represented there. In a wish to bring to the listener our musical ideas, the thinnest interconnection between music and lyrics appears which also enforces the power our music carries on. This album is listened “in one single breath”, and at the same time its far not an easy music which make people to think. All who like un-conventional and non-standard music I think will like “Totentanz”.“

Be so kind and tell about your proudest own achievement on these new album!

„In this album we’ve mastered to create very interesting and diverse musical world. Another achievement is that we’ve reached a new level of implementation of unusual creative ideas. This includes the quality of arrangements and overall sound production. But the most achievement I think is that we have finally marked our own unique musical language and landmark the path which the band will follow In it’s future development – without intersection with other bands.“ 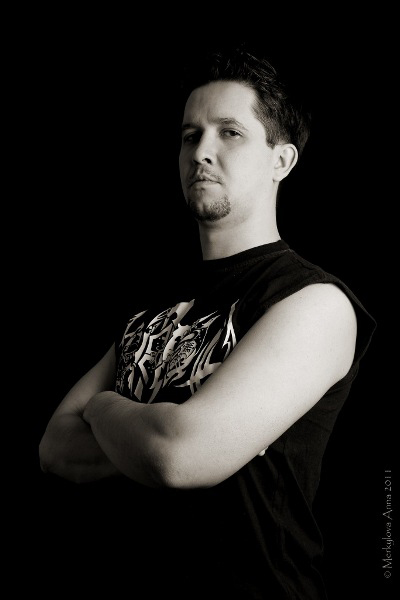 How did develop the whole musical thing until that current result?

„Since the beginning of band’s existence we wanted to play Death Metal. But of course we wanted to make our music special so that it will not be a copycat of other bands which play in this genre. The idea to use keyboards came to our mind, they had to reinforce the dark atmosphere and by no means to lighten the overall sound and mood. What we have started to play on rehearsals fully covered our expectations – that was exactly what we wanted to get: harsh music and dark atmosphere. In our Ukrainian Metal scene there was and there are no bands which are even close to that. But we were not sure if there are any bands in the Western part of the world who did something like that, but expected that probably there are some. Thus we’ve decided to give the music our national character – that’s why we started to use live folk instruments. But this was rather intuitive decision, which came by itself into our style – to use all the musical tools we were mastered. Our keyboard player Ann played professionally on flute and I am professional violinist. Thus we’ve decided to use these traditionally non-Metal instruments in the most extreme episodes. We wanted to prove that these instruments can not only create folk and epic atmosphere, but also add “horror” elements into already sinister atmosphere. As the time went the role of keyboards also increased a lot, we also started to use industrial “features” in our works, as actually we wanted from the beginning but had no technical possibility for doing that. To conclude – we really enjoy to experiment with the sound and music, to open new horizons in the genre of Metal music.“

With which specific feelings the main part of the songwriting has been done?

„Past, future and present, unknown worlds and far spaces, great secrets of the universe and elemental parts of unbounded. Trying to understand all that with our musical mind and creative metaconsciousness makes a basis for our music. All this infinite information inspires us. As a result our music appears to be also unbounded, non-constraint and diverse. If one listens to our music carefully, besides the guitar riffs, keyboards and drums, one can listen to the sounds of boundless cosmos, ancient worlds and unknown future. Some listeners will hear tank cannonade and the flight of fine matter in our music, some will hear nuclear explosion and the quiet of cosmic vacuum, some will hear birds singing and the roar of a rocketship, some will hear the fluttering of butterfly wings next to a white lily and the noise of a diesel engine atop a nuclear icebreaking ship. The topics you are hearing in our lyrics came through time and space and, as a result, were ground by our consciousness, compiled by our subconscious and sculpted by the point of a pen on the plane of infinity.“

What meaning lies behind the conceptual background - can you bring the lyrical contents of the songs in a short wise here?

„Conceptual basis for this album is an interconnection of life and death. This is a Vision which does not have any limitations in time and space. A whole world, a real and underworld, an abstract. The lyrics sometimes is of half-science fiction manner, but is totally based on the real life. Its like a dream, having a mystic content that is still generated by human brain. Both rational and irrational is here.“ 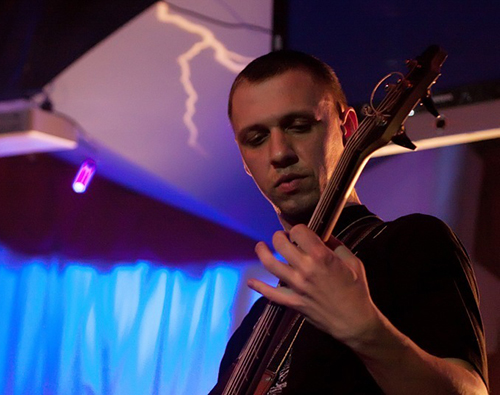 What are you still looking for in the development of Thunderkraft's musical style?

„“Totentanz” have shown us that we are on the right way, thus we will continue our development in the same direction. All our future work stylistically will be also very diverse and non-constraint. I think in the future the listeners will hear very distinctive elements, both comparing to our previous albums and music by other bands. Each new material will be very special. But generally we will surely keep a heavy and harsh Metal sound, and all these brushes like live instruments and electronic arrangements.“

What's your ideal song on the upcoming Thunderkraft record and why?

„In this case its impossible to call one or another song to be ideal – the album is a conceptual piece of Art and have to be listened throughout. I can reformulate this idea this way – listening just to one song at “Totentanz” is simply impossible to grasp the feeling of the whole album!“

Where the album has been recorded and are you satisfied with the sound?

„The recording process of this album was far not an easy going because we had to finance the recording by ourselves. As a result the studio work took a very long time. Drums, bass and guitars were recorded at one studio; keyboards, synths, classical instruments and vocals at another one; and mixing and mastering we had to perform at a third studio. Thus a lot of work had to be done to manage all that. But I am very proud with the final result – for all our efforts we got this great opus called “Totentanz” – with a good and dense sound production and sound in general very steady and expressive.“