This four bright Finnish speedsters did caught my attention. For their currently appearing debut album „Ode To My Misery“ is anything but a similar.

Emotional very intense and thus quickly rousing Melodic Death Metal of noble playing technical appearance with at times wonderfully virtuosic guitar work. And as usual from this not only scenic, but also musically delightful Scandinavian Lakeland, the quartet from Karjaa acts right from the start very high-class and stylish.

Bass player Kaj Michelsson, otherwise responsible in this recommendable ensemble for aggressive vocals, reports in the following about the new publication. 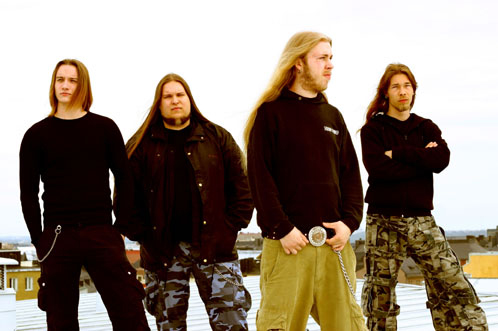 Kaj, how is the feeling within the band these days?

„Just fine, thanks for asking! We're very pleased with the album and now we're rehearsing for the forthcoming gigs. Wellu, the drummer, is currently in army doing his military-service (that's the unfortunate duty for every Finnish men) and that's why we don't have as much time to play as we would want to. But l think things are going just great now.“

Which music do you listening nowadays and which bands are in your eyes really great?

„I listen to everykind of music. Metal is obviously closest to my heart, but sometimes i listen to a lot easier and lighter music. But mostly I listen to good old Death Metal. At the moment I'm really exited about the new Anders Fridén's project Passenger, and it's debut album "Passenger". I also found again the Hypocrisy's "The Fourth Dimension" which I havent listened for years. Also Finnish Diablo, TOC and Sonata Arctica has been in my CD player more than often.“

What stands behind the title of the release?

„It's a short view to the lyrical side of the album. It reflects all the sadness and depression it holds inside. It's a summary for the songs and the lyrics. Life is never easy, that's what it's all about.“

Please tell a few words about the lyrical content of the new tracks! 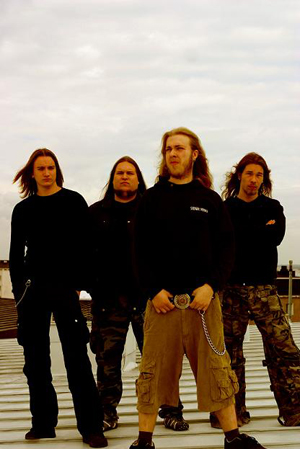 „Dark and desperate. I'm not saying that it's all about weeping and whining, just that I have gathered all the darkest sides of life into them.“

In what kind of moods were written the lyrics?

„In somehow quite normal moods. I reflect the things I inhale everyday and gather them into lyrics. It doesn't mean that my personal life is like I would be walking in the hell every secend, just that I know the dark side of life, and I can write about it, even when I'm feeling happy or etc... I mean, I can easily smile and write about death and suffering.“

Which things have influenced the creativity more or lesser in the pre-time of the album?

„Music itself in every way. We are in a happy position because we live in cold Finland, and in here we live in a small and boring town called Karjaa. The situation itself gives you a lot of inspiration and dark subjects. And because there is nothing to do here, we have all the time in the world to practice. We have rehearsals almost 6-7 times a week, all the time. Because there is nothing else here to do.“

In which moods were composed the new songs mainly?

„Because we practice a lot, the songs comes out naturally and you don't have to figure or compose one riff in your home for weeks and then decide it's crap and start all over again. In rehearsals someone just gets an idea or makes out a riff, he plays it to others, we start to jamm with it, and then we just develope it further, and if it works, it will be added to our file of riffs and songparts. Of course Sakari and Jani makes out riffs and such in their homes and then present them to us others later.“

Exists a concept behind the new album and if yes, what kind of?

„Well, yes and no. There is no pre-figured concept or such in it. But of course the songs adapts to each others and so does the lyrics, and together they make a complete and whole album. We didn't want to make compromises or anything, and that's why the album is rough, high-tempo and brutal, just the way we wanted it to be.“ 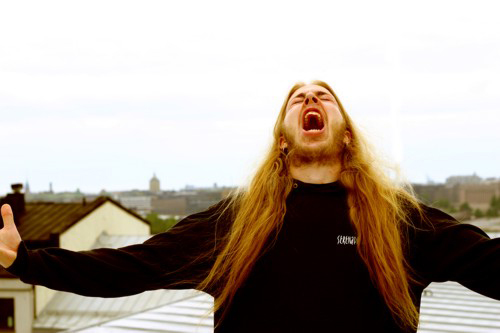 „Every kind of Metal, and any lighter music also. We are all just huge fans of music. Metal-abusers. Of course the biggest inspirations come from other death-bands, and from the biggest cult-bands like Slayer and such. You could say that we inspire from music, everyday living and from the poor weather in Finland.“

What does mean your band name?

„It could easily mean the new uprise of the band. We have had our hard times and experienced a lot of line-up changes. Now that we have stabilized our line-up, have a solid record deal and things are going well, I think that The Wake means a new beginning for us and for the listeners.“

Please describe yourself with a few words!

„I'm open minded, happy, and really do not take life as a grantity. I live day by day and never make plans too far in to the future. My motto is "don't chase your happiness, let it chase you!"“

In spiritual or astral powers do you believe? 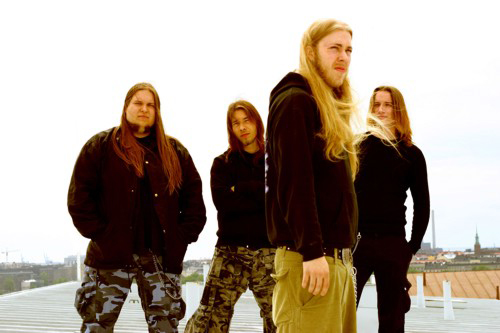 „I personally don't believe in astral powers. I think that everything in this world has it's physical and spiritual side, and everything we do, comes back to us someday and in some form. Like every word has a meaning which you can't withdraw.“

Which is definite goal with your music?

„To conquer the world of course! Hehe. No, really, we are not having any specific goals or such. We are just doing because it's fun. There are so many things in music business where you can't influence yourself. Your success and amounts of records sold depends on other people than you. Of course we have a dream that someday everyone recognizes our band and likes our music.“

Primary plans for the future?

„Lots of gigs, hopefully a tour in Europe, and then at year 2004 to the studio to record the second masterpiece of The Wake.”