And the new album „Desire Of Damnation” sounds like a gloomy conclusion. Singer Sonya Scarlet showed the Italian vampire theater for a while her back - in order to report over the new bloodsucker songs. 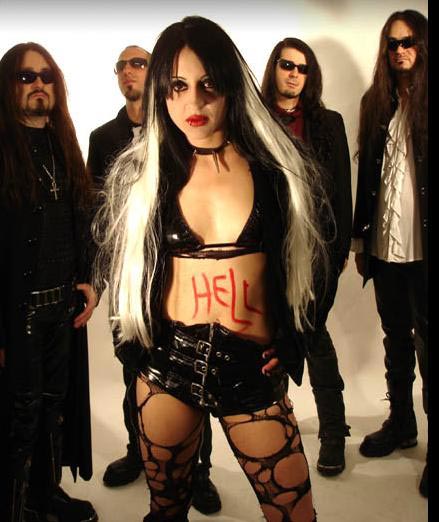 What was the reason to publish the new release as live/studio double disk?

„As you know some months ago our label released our first DVD live `The Addiction Tour 2006`. This DVD was very successful in Europe, so Plastic Head proposed us to use the audio track of the DVD to produce a live CD. When the live-CD was in production we had the idea to include 4 new songs of the band, because from Pleasure and Pain in 2005, our sound changed a little bit ... and we like to share with the fans the evolution of our sound. Then we decided to include also a re-played and re-arranged version of `La Danse Macabre Du Vampire`, in complete brand new way. Meanwhile some DJs proposed us some remixed of our old songs. At the end we had so much material that we decided to make a Double CD album, 1 Cd with the live material of The Addiction Tour 2006, and one other CD with the 4 new songs, the new version of `La Danse Macabre Du Vampire` and 4 remixes of old songs.”

What´s still so special about the vampires in your eyes?

„Vampirism is the most seductive metaphor about the research of the eternal life. The blood has got a great power, it’s our life we cannot live without it but we can live for it… All the altars of the ancient rites are covered by blood, I’ m not saying that it is good or not but blood is really a strong vehicle to give and take energy back and more. In the old novels from the east Europe lands the vampires were cold creatures without any kind of charm, just monsters. After the novel written by Polidori, the vampire, they start to become a sort of dandies, romantic, charming and seductive characters with the thirst of blood. I really love both.”

Which one is still your main focus in the music of Theatres des Vampires?

„We need to follow our emotions, our state of mind, we need to create a special feeling between music and soul. We cannot plan anything we cannot say which is the main focus for us because it change step by step, we are never the same and our feelings turns with us. We love to create a particular atmosphere where pleasure and pain lives together.”

What can you tell about the chemistry between the involved ones?

„Our band is a kind of family. The enthusiasm of each single element, the passion, the love for our music and our theme, it’s vital for us. To create the right chemistry and the right sound. As you know Theatres des Vampires is a band in continue evolution, we evolved year after year, album after album, always searching for new sounds and new inspirations. All of this is thanks to the enthusiasm of each band member. We are a family... And we work as a single element when we compose and we are on tour. This is our power and our secret.” 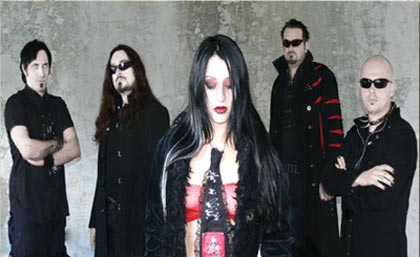 What are the main differences in your opinion from the music of the last album to the current album?

„`Pleasure And Pain` was the first step of a new Theatres des Vampires evolution, more modern and gothic than past and where, for the first time, I was the main singer of the band. So it was a very strong change for us and for our fans, the beginning of a new era of vampirism. With `Desire Of Damnation` this evolution goes on, it’s more inside the gothic metal sound, more “sweet” but without leaving the sensation of suffering and pain that the lyrics, the music and the voice explain every time. It will be our direction for the next works for sure.”

Were you working on the new album very busy lately?

„Yes, actually we’re having lot of interviews from magazine all around the world, we made part of the soundtrack of a movie that will be realized soon, `Muranu The Vampire`, a new video that you can find on our web site made by the same director of the movie. We’re waiting for the realizing of `Desires Of Damnation` on March and we’re planning some gigs all around. And more. There’s a lot of work to do.”

At the time, which topics inspired and/or motivated you for the current album? Writers? Visual artists? Movies?

„It’s the actual life that motivates us as artists. Our experiences of life, our daily life time. We tell about histories of our life, but seen with our personal point of view.. with the eyes of a vampire. In the past as you know we found inspiration from movies, books and art in general, as you know we was always attracted by romantic writers, from horror movies and vampiric things. But from `Pleasure And Pain` we started digging deep our actual life, our experiences as vampires. So yes, today we find inspiration from what we live... I’m sure about this.” 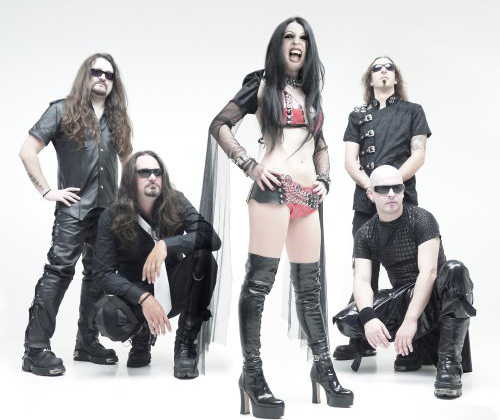 „I don’t like to think about my music next years, I live following the moment, we’re here now, we believe in what we do and people believe in us. We work hard to create our own future, but, I cannot say about it, I hope that we’ll grow up more next future.”

„I hate almost everybody, I hate mediocrity, I hate god.”

Which was the most successful gig in the last time?

„We did lots of gigs all around and some tours all around Europe. We had several successful gigs and festivals, I cannot really remember where and when (too much alcohol and more sometimes), I can say to you that my favourite places to play are east Europe cities like Zagreb and Prague and England. I love London, it’s my second home.”

„To organize gigs everywhere and play all the time. It should be a good plan I suppose.”

„Thank you so much for your bloody interview, Markus, and a special thanks to our fans over there and for the attention of your readers, we are here also because of you, thanks again and see you in Germany soon! Bloody bites, Scarlet.”