But independence is also a big asset here. Since 2002, Thaurorod worked eager, ambitious and relentless on their musical vision. In 2010 „Upon Haunted Battlefields“ was released, a promising album-opening which gave the band name of the talents from Jokela a good reputation.

The second album „Anteinferno“ will soon be released by the Scandinavian experts. An epic-festive illustrious and opulently arranged Melodic Power Metal spectacle! I talk to bass player Pasi Tanskanen.

How do you feel now, after having finished the new Thaurorod release? 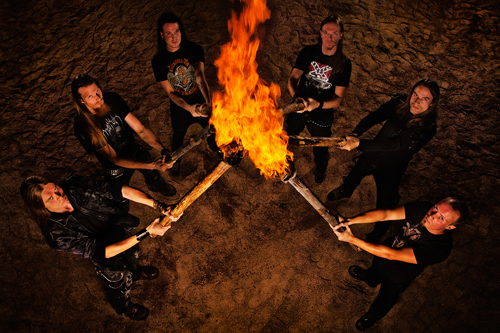 „Feeling very very proud and looking so much forward to releasing this album! There were lots of difficult moments between the previous album and this with all the line-up changes and all and that’s why it feels even more rewarding to have this finally released! Also I am sure this album will achieve something big! It’s just as killer as Metal fuckin’ gets!“

To my mind „Anteinferno“ owns primarily a very ‚timeless‘ character, which I prefer, when it comes to such. How do you've found your unique style?

„I don’t really know… we just want to write as good songs as possible and we have gathered the best line-up possible and this is the result. We don’t aim for being too unique when writing songs but of course we don’t want to repeat all the metal clichés either. Also we want to have many kinds of songs on the album…I mean so many band out there sound just like all the other songs they’ve made and there is no imagination at all … why not to write fast songs, slow songs and mid-tempo songs … why not to write songs that have very different mood … it’s so much more interesting for people to listen to the albums when there are many different dimensions. The most important thing of course is that the songs must be really really good and kill!“

Would you name the music on the new release typically Finnish?

„No I wouldn’t. Of course there are a lot of influence from several Finnish bands but so there are from German bands and British bands as well … mostly we are Finnish guys but then again Andi isn’t and that alone when this non-Finnish guy happens to be a vocalist make it sound not that Finnish.“

Many times the newest songs of Thaurorod remind me at the special fine time in the middle/late 90s, which was dominated mostly by r-e-a-l curious minds/artists as Stratovarius/Tolkki f.e., huge epic facets, etc. in such a kind of Metal. Your opinion about? 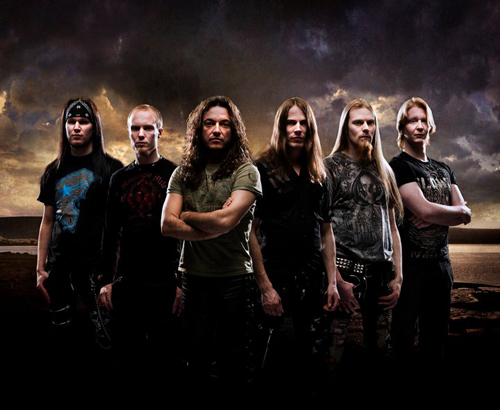 „Yeah I agree, this album might sound more like Power/Heavy Metal in the 90s and to me even 80s. That’s where we have grown and started to listen Metal music and I think we have done pretty awesome job in bringing the sound and song-writing of 80s and 90s to this day while given the sound a fresh update.“

Please describe the main musical character of the new album in your own words!

„‚Anteinferno‘ is very versatile album and pushing every limit further! It has the fastest Thaurorod song ever as well as the slowest. Also it has the longest Thaurorod song ever as well as the shortest. The album has some happy moods in some songs but mostly it’s a lot darker album than what the previous ‚Upon Haunted Battlefields‘ was. Especially the title song and ‚Marked For Diablo‘ are good examples of a song with dark mood and sound where ‚Heart Of The Lion‘ and ‚Victor‘ delivers something more lightful but still with a touch of melancholy. Like mentioned earlier it really is a little bit of 80s and 90s sound brought to this day and not less because of Andi's vocals.“

What¹s your very own personal view about the ‚artistic spirit‘ of the new album release?

„I guess the album is mainly written for people as entertainment but it changes a little bit between the songs ...for example the title song ‚Anteinferno‘, ‚Planet X‘ or ‚For The Rose To The Grave‘ which is about an actual historical battle are the songs which are pretty much just for entertainment. Title song ‚Anteinferno‘ still can be seen expressing the hard times of the band during the last years and all the people can easily reflect it to their own lives when it gets hard for them. Then we have many songs that has more positive lyrics and are about the fighting spirit and not giving up no matter what. Also Andi wrote really well on the song ‚Path‘ about the world as it is as people are greedy and willing to do anything to gain more power and money while at the same time there are a lot of people who have nothing at all. The album title reflects hell and some songs inside this infernal album are the songs that express the guts to make it through that hell never giving up!“

Which noteworthy (small) differences to the previous album „Upon Haunted Battlefields“ are waiting now for the curious listeners?

„The songs are just so much better! Also there is a bit more simple song structures than what it was on ‚Upon Haunted Battlefields’ which makes some songs more easy to listen. This is a lot more melodic album and focusing more in huge choruses! The vocalist, Andi, brings a whole new sound for Thaurorod and his vocals, melodies and vocal harmonies are just gold and honey for ears… Andi is so creative and knows very well what sounds good and what doesn’t. The whole sound on the album is better… but especially the drum, bass guitar and rhythm guitar sounds has a lot more balls … the studio engineer made awesome job with the basic sounds and they kick ass!“

Is it allowed to ask about special musical influences which led to the new material?

„Sure - but I don’t really know. There are no huge influences that would have led to the new material as it’s more like a natural development in song writing and arrangements. We actually made the decision to write a perfect album and therefore the song quality needed to be on the very highest level to make it to the album! This is something where I stand 100 % behind of each song of the album! We managed to make it just as we wanted!“

Be so kind and bring the lyrical main content of „Anteinferno“ a bit closer!

„Lets go through all the songs of the album:

‚Planet X‘ = It’s about the predictions of Armageddon and about debates when it will be and all the bullshit like that but it’s fascinating and a great subject for a Metal song! 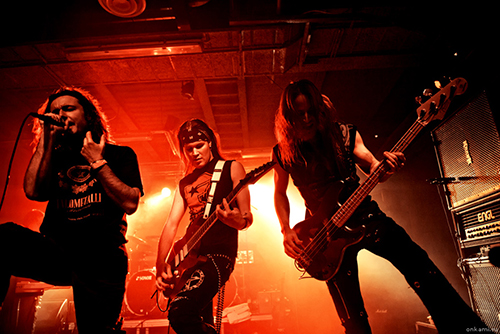 ‚Heart Of The Lion‘ = The song is about the fighting spirit and not giving up no matter how hard it fuckin’ gets just go ahead…reflects very much the difficult moments of the band between these 2 albums.

‚Overboard‘ = Funnily I wrote this song using metaphors for our previous vocalist who abandoned the band during a tour … it’s about someone slowing things down and about growing stronger without him.

‚Far From Home‘ = About the hunger to go on and on … the song can be for anyone pretty much. No matter if you are a rally driver, football player, business man or a musician…

‚Victor‘ = It’s basically a song with traditional battle theme. About the determination to fight to the victory.

‚Marked For Diablo‘ = About the horrors of battle … anyone at war is doomed to die and it’s not in your hands always … you just go and fight without knowing if you gonna live the next day or not.

‚For The Rose To The Grave‘ = About the bloodiest battle ever fought on the soil of England during the wars of the roses … it’s about the battle of Towton.

‚Anteinferno‘ = Read the next question and you’ll find out!

‚Path‘ = About the world going more and more greedy and people are willing to do whatever to just gain more power and money while elsewhere there are millions of people who have absolutely nothing. It's kind of a statement for all the people in the world to stop thinking for a while if we are going into a wrong direction. Still it's hard to change it as that is how the society runs and that train is not turning around.

‚Riders Of The Shires‘ = About the biggest horse breed ever the Shire horse that was used in medieval battles before the powder and guns. 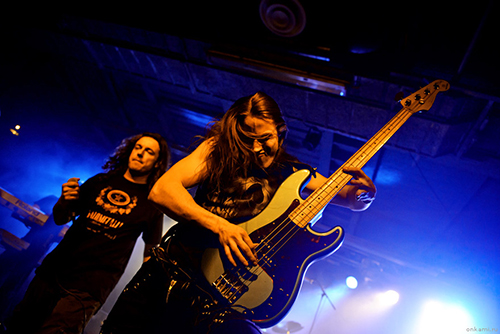 What is behind the title of the new Thaurorod album?

„‚Anteinferno‘ is about the 3rd canto of Inferno part of Dante Alghieri’s ‚The Divine Comedy‘. By the book everyone who was not faithful to God but did not rebel either but were only faithful for themselves were the souls who were rejected by both heaven and hell and they had to suffer in a place by the inferno yet still not part of it. They were sad souls with no hope for ascending nor dying again.“

Very complex material was created - how long did the complete songwriting take?

„When you start writing a song it usually comes up pretty fast if you just work on that and spend a few hours with it but then they starts to find their final shapes when rehearsing them and all the final arrangements just pops up like it was always meant to be. During the song writing process we also had the line-up changes which in this case meant that we lost some of the songs that were meant to be on the album and therefore we had to write some new songs … so we did write a lot of new songs and much better ones as well but it took time. The idea is to start working on the 3rd album very soon and make the pre production as properly as possible so it should be a lot easier and faster so the gap between the ‚Anteinferno‘ and the next album wouldn’t need to be 3 years like between ‚Upon Haunted Battlefields‘ and ‚Anteinferno‘.“

Some own words to the fans and all other Sympho Power Metal followers out there?

„Congratulations! You now have a chance to order or pre-order one of the best Power/Heavy Metal albums ever released! This is heavy fuckin’ Metal and it does not get any better than this! I hope to see you on the road and please give us a comment about ‚Anteinferno‘! We love to hear what you think of it! Lets blow the roofs off the venues very soon!“