„Metallitotuus“, fully presented in the charming language of the four authors, and staged in the indestructible tradition of Manowar, offers a timeless multitude of cherished classical, heroic and melodic Heavy Metal.

Guitarist and singer Arto Järvinen feels currently simply perfectly, as he says. He graduated with his sworn horde already a lot of concerts and is thrilled at the many upcoming gigs as he reports. 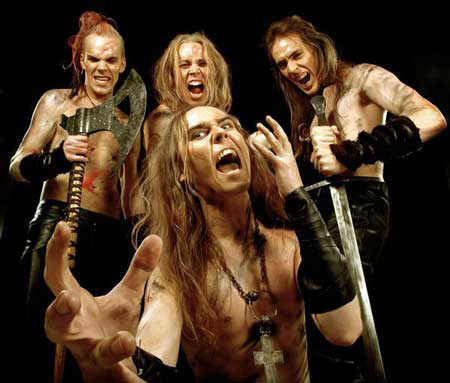 How are you at the moment?

Is the big success in your home-country a surprise for you all?

„We knew that we had something great when we first launched Teräsbetoni. The volume of our success was the thing that caught us off guard! We never imgined that our debut album and single would sell gold and spend week after week on the charts.“

To me is your new album an very refreshing work and pretty unique. How do you evaluate the whole?

„It's different, sure. While other bands here tend to develop Metal in new directions or creating new genres, we returned to the roots of classical Heavy Metal. Our music might be exotic, because it is actually very simple and raw.“

How would you describe the songs for new listeners?

„Very simple and very powerful songs. We like to call it classical Heavy Metal ourselves. There's no huge instrumental parts and it does not require tons of skills to play.“

What means it for you personal, to play such music as with Teräsbetoni?

„I think that this is the way for me to respect the power and the glory of metal! I grew up listening to metal and this is actually the first band for me to play real metal in. It's like thanking the whole music style for making me the guy I am today!“

„Well, Manowar can definately be heard and seen, too. Since all of Teräabetoni members listen to different kinds of music, we get influences from a wide field of Metal music. Mr. Rantanen likes Power Metal a lot and Mr. Ahola digs the 70's rock, like Glenn Hughes and David Coverdales' bands.” 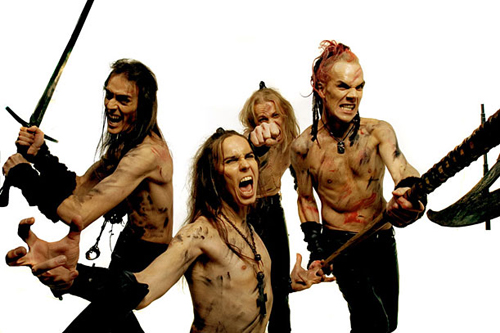 „For me, the toughest thing now is definitely Rammstein. The music is brutal and so is the language! I love the pronounciation! Some of the older great band that still kick ass are Manowar, Accept, Gamma Ray, Type O Negative and so on.”

„We don't have any pyrotechnics or enormous plastic dragons flying on the stage! We trust the power of our music and our own personal show. When we play, we live the music, we love the music! In Finland the Teräsbetoni brotherhood chants with us, they sing with us. In the end, it's no longer us playing our songs, but the whole crowd singing the songs with us. This is the feeling we aim for, that's what makes our gigs worth experiencing.“

How long took the complete songwriting for the new album?

„Since we have three songswriters in the band, we don't have a problem with that. Not that surprisingly, all our songs are turned into ready Teräsbetoni songs with a little of rehearsing and re-arranging. We actually had many good songs that were left outside the album, because there was no room for them!“

„V. Rantanen, J. Ahola and myself did the writing. Each writer always makes his song very finished before he introduces them to the rest of the band. That includes the songs structure, melodies, riffs and the lyrics too.“

„"Metallitotuus" is roughly translated "The Metaltruth". I like to translate it "The Truth in Metal", because our music aims to dig deeper into the essence of the word. "The Truth in Metal" suggests that there is so much to unfold in the metal way of thinking and it should be explored further.“ 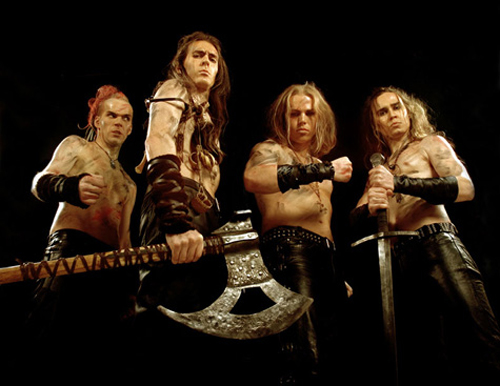 Which were the main lyrical influences for the new album of Teräsbetoni?

„Our influence on lyrics were our everyday lives. We did add some drama to them, obviously. We're not fighting the enemy on the streets or hunting our food in the forests. But by making the lyrics more powerful and dramatized makes them more impressive.“

Please tell a bit about the lyrics of the new songs! Which concept exists therein?

„The chant in the Metallitotuus song reveals much. It goes "Veljeys, kunnia, totuus" which translates into "Brotherhood, honor, truth". We sing much about standing tall as yourself and not letting anyone tell you how to live your life, we sing about the hard parts of living a life of a metalhead. There's songs about the brotherhood of metal people, songs of correcting injustice, songs about how fierce metal can be and songs about celebrating metal together! And naturally, there's some beer drinking and women involved as well! The most important thing we sing about is Metal itself.“

The frontcover ,art‘ for the new album - some will find it a bit childish . What is your personal opinion about this?

„When people suspect our motives because of our appearance or our lyrics or so on, we tend to ingnore them. By ignoring them we prove that we are not a joke and that we truly love metal music. This is a way to make some people even get it that Teräsbetoni has some attitude and that the music is actually very nice.“

„All of our expections have been blown away already! It came out good and it's been on the charts for some time now! We get to play a lot live and we almost accidentally were able to bring metal music to the consciousness of non-metal people.“ 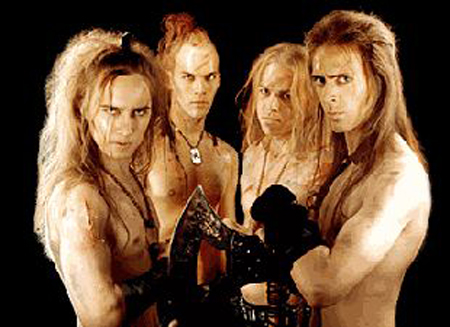 Where was the new release produced?

„We recorded and mixed the album at Astia-studio's in Finland's Lappeenranta. The master and chief there is Mr. Anssi Kippo and you might know him from such projects as Children Of Bodom and such.“

„We played first and drank beer afterwards. Lots of sauna too! Nothing special really, we did our part and had a lot fun working with each other and Mr. Kippo.“

Where do you see your band Teräsbetoni in ten years?

„Hopefully playing some kick ass gigs for some serious headbangers!”

In what direction the music of Teräsbetoni will go?

„The debut album got out pretty much the way we though it should have. We will definately try a few things here and there and look more widely on the aspects and issues conserning metal music. But we'll be sure to stick to the same principles that we did on the first album.“

„There's lots of places to go spreading the music in Finland alone, so at the moment we're consentrating on doing as much live shows as we can. The next album has been discussed very briefly and it might be reasonable to wait for it to be released late in 2006.“