Not only lifelong possessed, old-school Slayer maniacs will celebrate the latest album of the Greek Thrash Metal band to the highest degree.

Finally, Suicidal Angels show off their most liquid, coherent and, above all, most catchy side on the sixth longplayer „Division Of Blood“.

The release clearly has potential to become a classic. Exquisite songwriting as from the genre textbook is implemented by deliciously perfidious guitar attacks and invariably killer drumming.

Gus Drax, lead-axe newcomer since 2015, is seamlessly integrated into the uncompromisingly enthusiastic performance of the constant ascent from Athens.

And not only the immensely high, virtuoso playing culture of the band is this time on the previous zenith. Also the unbelievably varied, thundering dynamics of this record is just gigantic! I speak with vocalist und guitarist Nick Melissourgos.

How do you feel now, after having finished these breathtaking new collection of outstanding and truly special songs? 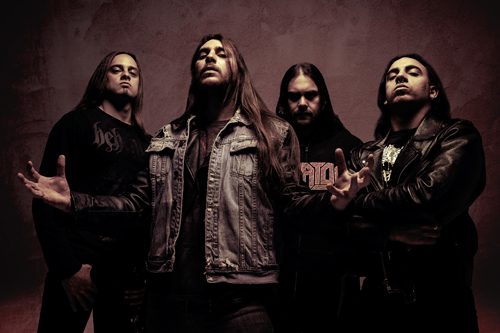 „First of all before we start, I would like to thank you very much for this interview and for your comments, on our new album. I would say that I feel really nice and full. It was a really stressed period, with thousands of changes in our lives, not only with the band but also personal ones. Anyway, there’s no reason to look at the past, the only that counts is that we are here once more, delivering, truly and sincerely, the best Suicidal Angels’ album, since the very beginning. I definitely love this piece of music …“

For which musical ideals does stand the new record „Division Of Blood“?

„The musical ideals are more or less the same since the very beginning. It is the passion behind the music, it is the music that we grew up. We listened to it when we were 15 years old, we still listen to it but the passion remains the same. We don't play this music just because it is in fashion. We do it because we love it, it is simple as that and that’s how it will remain. If it loses the purity, then looses the magic and it’s not fun anymore.“

What still counts most for you in making music with Suicidal Angels?

„The answer to this is really simple… Im afraid I can‘t describe it more precisely… What mostly counts for us when making music, is to make us head banging in the rehearsal room when practicing. There have been many times that we have kicked out a song from a record because we didn't like it anymore. It has to move our heads or else it is a “no go”.“

Which noteworthy differences to the previous album "Divide And Conquer" are waiting now for the curious listeners of „Division Of Blood“? 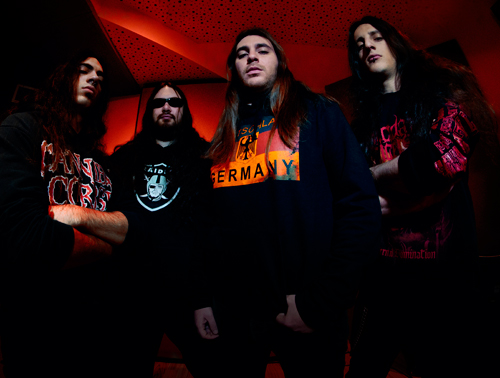 „The differences cant be compared just to the previous album. I, personally, would say that this album is totally different, compared to the previous discography, generally speaking. It seems that, after the years in recordings and touring, we found “ourselves”, something like an identity. A lot would say, that’s a typical comment on a new record from every musician. Fortunately, not on this album, not on this situation. It’s something different, not totally, but still you can hear Suicidal Angels inside this piece of music.“

Please let us know the most important things about it!

„We were talking about differences before. That’s one more, and maybe the main, difference of the whole thing. We almost recorded this album live, I mean, without using too much technology, not too much of editing. We wanted to give to the audience the feeling of a live concert. We wanted to give the audience, the feeling that is in the rehearsal room with us and to feel the whole vibe that moves this fucking head. In my humble opinion, along with the amazing co-operation of Mr. Jörn Uken, we made it happen! I guess there’s a question for the studio time later on, so I don't give more details now, hehe.“

Be so kind and describe the main musical character of the new album with your own words!

„The main musical character…hm, that’s a good question. I would describe this album as a mix of the heavy groovie parts of Thrash music, with elements of the old school Death Thrash. We have gone even faster on this album, even more than the first one. We never have played that fast in combination with groove, ever before.“

The vocals fitting simply perfect to the material in each facet. How did you manage this? 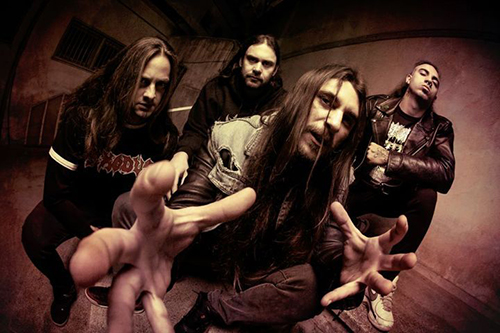 „There had been a lot “homework” on the vocal lines and the phrases. Every single word had been worked in order to be able to express the feeling of each song and, generally, of the whole album. Also it was the first time that I recorded the vocals, almost on a way of a live or a rehearsal. Without many cuts, without edits, just get in there and sing the damn song. Scream your ass out and catch the listener from the face. Without having any idea how people will receive it, I totally love it.“

„Division Of Blood“ attacks sharp, biting, pounding and even catchy in one … a delicious feast for lovers of State-Of-The-Art Thrash Metal. Who wrote most of the new songs?

„The whole thing with song writing still remains the same since day one. I write the music and lyrics and the whole arrangement we do it along with Orfeas, the rock behind the rhythm castle. That’s how we did it all the previous years, that’s how we did it this time as well. We wanted to have a big variety in the songs but in the same time to keep it simple and in your face. Also Jörg contributed some stuff in the whole thing with some nice details during the recording progress.“

The well made, catchy contrasting melodies and drum arrangements are a main part of the extremely well balanced, new material - who takes care about that so successful in the band?

„There is no specific recipe behind that. As I have said also in the past in previous interviews and conversations, we don't make music in order to release a record. Why to release a record if the songs in it, they aren't at least equal or better than the previous one? Why to disappoint the people that follow the band for years and enjoy their times listening to our music and attending the shows? Above all, we create music that we enjoy to play! I think that’s the secret behind the whole thing.“ 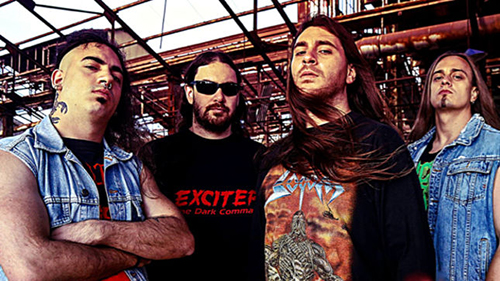 How long has the songwriting lasted for all of your new Thrash monsters?

„There is never a specific songwriting period. I mean, even now, I already work on some ideas for the next album. This doesn't mean that there are songs ready for another album, but just working on ideas. That’s how it goes generally speaking. When there is a good idea, I just save it in the computer and sometime when it comes the proper mood, it has the potential to become a song. I almost never remember when I start writing the first song for a future album.“

Suicidal Angels had the pleasure to work direct with Soundlodge Studio this time. Please bring that a bit closer!

„Sure, with pleasure! We know Jörg since 2011, he did the mix and the master of “Bloodbath”. He had done an amazing work on that and we have talked of a possible future co-operation. He was also involved a bit in the production of “Divide And Conquer”, and this time we decided to go to the Soundlodge studios, lock ourselves inside for 5 weeks and make a new album. It was one of the smoothest and coolest recording procedures, we enjoyed it very much. And every time I was almost loosing my mind, he was there to calm down the system, hahaha. I must admit that it wasn't boring at all!! The toughest of all was just the early waking up in the morning that I was not used to, hahaha.“

Were there particular musical influences that were processed in the new songs? 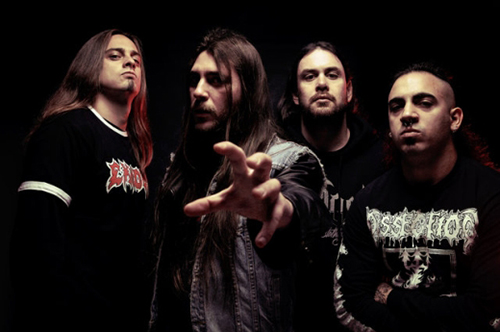 „Special music influences? No, nothing at all. As I mentioned before, it is the passion itself that leads us to create music. The times are different nowadays. There are thousands people playing Heavy Metal music, there are hundreds of bands out there, it isn't as it was a couple of decades ago. I personally believe that the only motive for making a step forward or the “difference”, is the passion for music. Without it, you just are a copy of something which attracts some light for some years and then go back home.“

Please tell about the main content of the lyrics of „Division Of Blood“!

„The main content of the lyrics this time, turns a bit more towards the war theme. But it has nothing to do with the typical war itself, bombs and airplanes and special forces and goes on. It has to do with the feeling of war itself. Anything that can be or create the necessary conditions. They are about the feeling of weakness in the eyes of the soldiers that they have orders to march on an attack, which will the last one of their lives and they know it. They are about little kids whose brain is poisoned with the pictures of blood from young ages. I hope I gave a bit of the content of the lyrics on this album.“