A truly outstanding Viking Folk Metal publication, unusual in multifarious concerns, gets throwed over by an Norwegian multi-instrumentalist.

The author by the name of Sorg, a passionated country-inhabitant and civilization-tired forest lover, produces on this stubborn done silverplate a charming majestic north-anthem art of the great-epic grudge-class.

I ask the mostly depressive, long-haired forest-master finally to an profound heathen conversation. 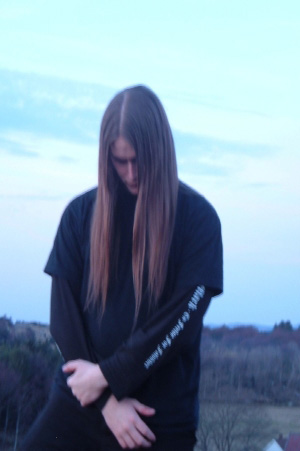 Hey Sorg, how are do you doing at the moment? Still longing for an epic suicide in your great environment?

„Greetings Markus and Germany from the beautiful land at the west coast of Norway, Hagland. My articulation in english is not one of the best, one of the worst to be honest. But I am a norseman who almost never has spoken or written the imperialists language, so I am excused, right? Just a reminder from a simple lad from the countryside before the interview. To describe my lifesituation as a single human being will not be especially interesting in a larger setting, rather superficial and meaningless in other words. But my soul suffer from its deepest on behalf of the situation in the rest of the world, where capitalism, religion rules like ever before. And when my brothers and sisters sustains under a rain of bombs , in social-fascism and gettig their (our) freedom constantly dispossessed, I am in pain as well, correct? I hate the world, I hate my life, because I am not a free man, I am a man locked in eternal chains. Lets all gather and commit suicide in the most dramatic and theatrical way in protest against the rulers, then we have a great revolution, then noone can ever again steal our freedom, haha. Thats what syndicalism is about not a world wide general-strike among all depressed, hahaha, perhaps the most realistic one. Dont take me seriously now.”

Please describe your attitude as a musician and tell about in which life-philosophy you do believe!

„My attitude? Strange question. I dont describe myself as a musician – I exist only in power of my own living idividual. I dont put myself into categories. I am an anarchist and a revolutionary, but my dreams wont come through before the rulers-system has ruined our world.”

What do you think about religions in general? Not less say they will bring the mankind some day to an horrible end…

„Karl Marx once said "religion is opium for the people". And thats mostly my view on it as well when it comes to the traditional forms of religion. But we also have several types of "social-religions" where we worship somekind of "master" or "oracle" within a small group of people. Humans which more or less use their false constructed authority to set standards, trends or even creates a sort of a "accepted" personallity which their followers adopt to become worthy "members" of the group. They also force their thoughts and meanings on to theese "members" of the group which they adopt without using their own common sense to evaluate if its right or wrong. They become followers. People are afraid to be social rejected and kicked out of a (the) society which will lead to different social sanctions for the "unlucky ones". They will get nickenamed as freaks and rumours will destroy their weak minds. But of course the "leaders" within a group has their leaders too, and the leaders of them also have leaders, it works almost like a social feudal-system. Human beings are weak and patetic animals.” 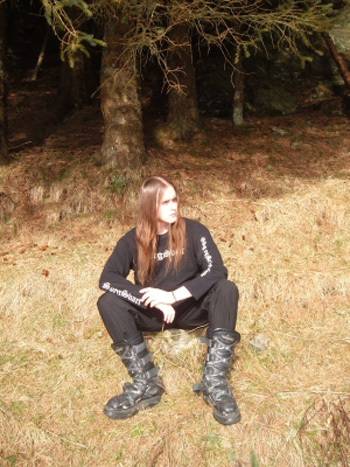 What do you think about the filth mankind and it‘s more and more executed damage of planet earth?

„I like your questions Markus, you shall have credit for not making another of these standard Black Metal band interviews! Now back to the question: it is not about what mankind to it is what the system make them do. Have you ever told a sheep not to follow the mainstream of fellowsheep? Paths has been made and routines has developed and it is almost impossible to reverse thoughts and actions which the humanity has been forced to do thousands of years. It is a shame that people mostly cant realize the fact that our world and its vegetation, animals, mountains and woods are the most important thing to preserve and rescue, even more important then the filthy humanity itself. No nature, no humans. So simple is that. So quit raping our earth and our common future!”

Please tell some musical influences for the compositions of Sorgsvart!

„The influences for my compositions only comes from myself and it appears mostly from my depressive moods. Music is all about emotions.”

In which mood(s) do you feel always the best creativeness?

„Hm... It depends, every feeling and every mood is a foundation for different pictures of sound in my mind. Mostly my mood is very melancholic and depressive which also characterizes large parts of SorgSvarts music. Strong and extreme feelings are always great seed for creative actions. It is sometimes very hard and painful to work with your creativeness when you are in a special mood, but the result is worth it, then you have laid all your soul into it. I am interested in giving a musical piece a great deal of contrasts so the variety in the music never loose its nerve or excitement. Many wonder how I can call my band "Sorgsvart" ( SorrowBlack or Darkest-Sorrow in english) when much of my music sounds so "jolly" and even "teasing" to a certain degree. It almost sounds like a happy man made it some says. The truth is that several of my melodies, as for an example the leading theme of "Skog Og Mark - En Frelse Fra Falskhet", is highly ironic. It may sound joyfull and cosy but hidden behind this irony you find a very serious and suicidal message, it is up to an observing listener to capture the essence of it and discover the composers ideas and intention with a piece of music.” 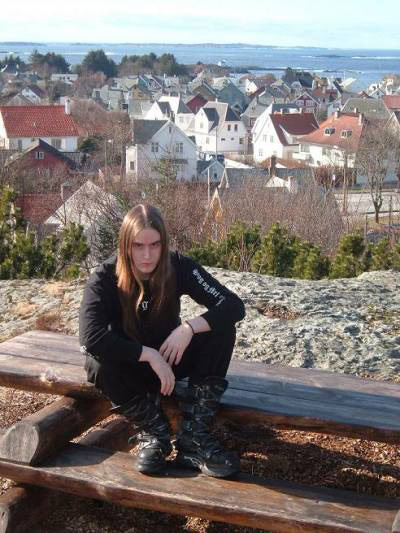 Describe the lyrical conception of „Fortapt Fra Verden I Vakkert Selvmord“ and tell some lyrical influences for these compositions!

How deep goes your connection to the ancient Norse mystical tales and legends?

„Not deep in a spiritual and religious way. As a norseman I find our ancient believes, figures and symbols much more interestning then f. ex. egyptian sfinxs, pharaoes and pyramides because this is my culture, my history. It is up to the Egyptians to take care of pyramides etc. If you are looking at a weather-forecast, do you care most about the weather in the northern regions of you country if you live in the southern part? The answer is obvious as it is with the interest in your own history contra someone elses history. Things which you are involved with personal is of course the things which affects you most.”

Which things do you do mainly beside making music each day?

„As I was telling you my dear comrade before I was to answer this interview, I have just returned from a three day long journey in the misty and dark mountains of Norway, where I rediscovered the wildes and most beautiful sides of Norway. This is getting better for each time I am walking around in this mighty country. I am actually a member of the youth squad of the Norwegian walkers union (The only organisation I am a member of). So I try to get out in the "Skog og Mark" (Forest and Countryside) as often I can as a main-interest beside music. As often as possible I also take myself a shot or two of the holy water Jägermeister to calm down my nerves and experience good times for a change. I am also writing a lot of philosophy and creating my own cartoon which is quite insane. Besides I have another one man band called "Norge"(Norway) which I made a cassette demo consisting of eight songs for three years ago, but it disappeared under mysterial circumstances. Anyway my second band "Norge" will be under Sorgsvart in the future.” 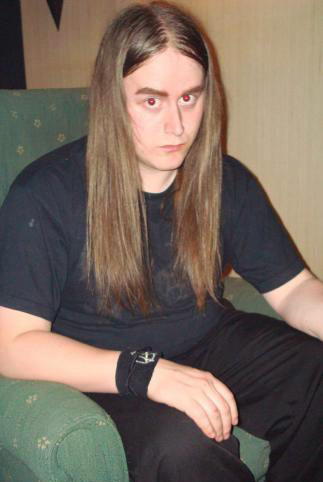 What contains a really good Sorgsvart song in your opinion?

Do you like some other bands in the style of Sorgsvart? Please tell your favourite bands out of that genre area!

„In that style? I am sure that everyone agrees with me when I am saying that a true band dont belong to a certain style or way of playing music, they belong to their own genre, just like Sorgsvart. But I also understand where you want with your question. My deepest anarchistic salutes goes to original and hard working bands which maintain their own identy and spirit, like Darkthrone and Taake. I really respect theese two bands.”

Would you like it to play live on stages?

Did you play live to date at all?

„No I didnt, got many offers but no interest from me.”

What would be special at a show of Sorgsvart?

„On a show I instructed a group of people to be trolls and elfs and dance and move after certain steps. I was dressed in the norwegian national dress while I was playing. The show ended with me dancing the old norwegian solo-dance, "Hallingkast", where the meaning is to kick a hat of a wooden stick. I had a girl dressed up in the national-costume holding the stick with the audience claping after the beat. Magic norse atmosphere stuned us all in that moment.”

„Right now I am looking forward to play my material (which is finished) for my next album "Vikingtid Og Anarki" (The Era Of Vikings And Anarchy) in a real professional studio which finally can give me the sound I want. And I can promise you all that this album will be a milestone within the black metal genre, the music on this one is incredible and special.”