The story of these excellent Finnish noble troup began in the year 2000 in the city of Riihimäki, quiet close to Helsinki.

And their fantastic self titled debut album surprised me immense positive. „Skyward” has set my heart on fire immediately. I could listen to it for my lifetime. And so I will do, definitely.

Hey Ville, to which bands do you prefer to listen?

„There´s always the good old stuff, like Iron Maiden, Metallica, Pantera, Megadeth, Manowar… out of the more recent bands there´s System Of A Down, Soilwork, Children Of Bodom, and many more. When I take a quick look at my CD-shelf, it´s mainly metal and I listen to them very rarely. Usually I only listen to music in my car except when some new band comes along and rocks my world. That happens so rarely these days.” 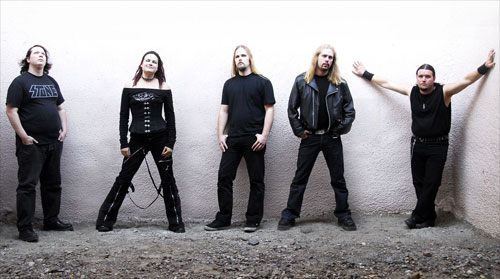 Do you feel satisfied with the work of your record label?

„Mainly yes. It´s a small label and they did what they promised. But then again, they can´t really do anything big like put us on a tour. But recently they have pushed us trough more in Germany,which is great. Our album was not released with a big campaign,so it has sold nicely considering that.At the moment we don´t even know how our 2nd album is going to be released and when.But that´s the way we do things, we just took a risk and went to the studio. Now we have a finished album that turned out to be a real killer. We are hoping for a release late this year, or maybe early 2008.”

„Yes, we enjoy playing live. Well, personally I don´t think of myself as a performer, more like a musicmaker then a stage person. But we have had some really good gigs recently. Like I said, the band is now together and it shows on our live performance. We are also hoping to get a company behind us to sell our gigs, so there will be more in the future. Hopefully in Germany, too.”

The glory music of Skyward is marvellous to my mind. And in not rare moments it sounds as Nightwish in their best creative times. The transfered emotions are so much more real than in the most of all the other worldwide Melodic-, Gothic- etc. Metal acts, I think. What´s your own opinion?

„I´m gonna go with your judgement here, hehe. When we did the album, there were some songs that surprised ourselves, because they were a lot better than we realised. It´s the strangest thing, when you create music and rehearse it endlessly, it can still surprise you. But like you said, emotions are real, we don´t pretend and don´t try to please the music executives out there. We do it the way we see best, and when a fan says “real”, it means the world to me.”

Your female singer is extraordinary talented and owns a godly voice. Did she visit some vocal-school or did she take lessons in singing ever?

„Sanna has taken lessons in classical singing and it shows on the album. But she has quit the lessons for the time being, and she´s developing her voice and range constantly in different directions. You may be surprised when you hear the follow-up album. There are many shades and tones in her voice now, that were´t there before. Actually, that´s the best time in the studio when you hear the vocals come alive. We had a lot of fun recording the vocals in the studio.” 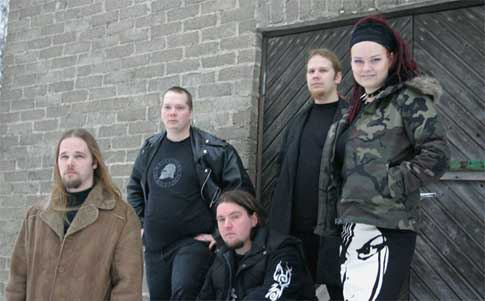 Have you heard a song out of the new Nightwish album? What´s your opinion about it?

„I have heard a couple of songs, but I choose to save the rest for when the album comes out. I don´t think public should hear an album before it´s officially released. Call me old fashioned, but that´s my opinion. Anyway, it´s sounds really good and big. I´m definitely gonna buy it the day it comes out.”

Out of which countries came the most enthusiastic feedback for your current album?

„Germany and surprisingly, USA seem to have the most devoted fans. You can´t even buy our album in USA, but still we seem to have a fanbase there. We have gotten a lot of heartwarming feedback from all around the world. That makes it all worthwhile. If I know that there´s a die-hard fan out there on the other side of the world, than the album was worth making.”

Which specific circumstances and influences led to your very own musical style?

„It was the discovery of Heavy Metal in the 80´s. Iron Maiden blew me away, then Metallica, Megadeth, Annihilator… I still listen to all of those from time to time and they still blow me away. I learned to play guitar listening to those bands and back then I had to learn to play everything I heard. I know all of us like those bands more or less, so there has never been any real debate on our musical style.”

Which one is still your main artistic focus in the music of Skyward?

„For one thing, I don´t want to plan too far ahead. Meaning the content and style. I think it´s best to be spontaneous and do what feels good, that is the only way to keep it real. So, in future I can only promise that Skyward´s music will be based on melody and feeling. On the upcoming album there is a lot variety in emotions. Sometimes it gets pretty grim, but there is always some uplifting element in there. So even when things look dark, the direction is skyward.”

„Direction, cause there are no boundaries. Nothing is forbidden when making music. A song may begin life with one word, that leads to a melody which leads to something else. It may take five minutes or five years to get a song ready, but it´s always worth it. It´s best not to censor yourself too much. There have been only a few songs in the Skyward history that we have thrown away. Those were good enough at the time of making, but then something better came up. Create now, go crazy, don´t think. That´s my policy.”

Which will be the main differences from the current Skyward album to the next full-length?

„I´d say that the material is more mature. There are not many fast songs, but the energy is still there. We have spent a lot of time with these songs, so they have had a chance to grow. There is such a good vibe troughout the album. It kicks of with a fast piece and evolves in many directions. From doomsday to partymode. I´m very happy with the result. I´m sure, that everyone who liked the first one, will like this one.” 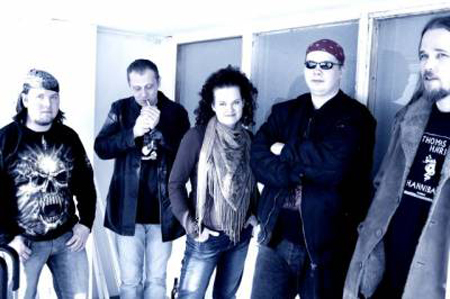 Have you been very busy lately with the work on your new album?

„Yeah, we started in April, and only now we have a final mix. We started of with a full working schedule, but the last couple of months have been just a little work here and there. Whenever we, and our engineer can find the time. I took a month off from my work in April, so that helped a lot. I could be at the studio day and night, and didn´t stress out too much. During our last albumsessions I burned myself with an overhectic schedule. Work-studio-work-studio … you can´t keep it up forever. Studiowork is surprisingly hard, by the way. It sounds easy, to just play your songs and go home, but it is really hard work. The upside is, of course, that it´s very rewarding mentally.”

Please tell the readers the conception and the lyrical background of your album release! The lyrics of the current album are as emotional true as easy to grip the mind of the listener, I love to read them while listening to your music!

„Great, I don´t think a lot of people care about the lyrics, but I really put an effort in them. It´s like a stream of consiousness. Sometimes I don´t even know what I´m writing about, but in the end it all comes together. I think that the best lyrics are the ones that mean different things to different people. On the upcoming album we go trough a range of emotions. There is darkness and light. The ongoing theme of ours, “have faith in yourself” is very much present. There is a story of a traveling man who gave us hope with his music. There is a story of a scarecrow standing in a dead world with no more crows to scare, loneliest job in the world. There is doomed romance and doomed future, but still there´s hope.”

Please give a description of the usual composing process for your songs!

„I usually get an idea at the worst possible time. I try to play that in my head till I get some peace and quiet and then work on it. Usually I don´t force it, but rather let it come naturally. When I have a song ready, I introduce it to Sakke, and then we play it to the rest of the band. I write the lyrics last, so I can fit them exactly to the song.”

„My family. We have a ten-month old son, who is a big inspiration to me.”

„Can´t think of anyone. People hate what/who they fear, and I can´t say I´m afraid of anyone.”

Which expectations do you have, when you look on forward to the rest of 2007?

„Right now, our biggest goal has been reached, as the album is complete. The next step is getting a good recordcompany behind us. I´m fairly confident that the future looks bright.”

„I hope that all this work has not come to waste. Meaning, that hopefully after a few years our work is recognized and appreciated. We are not making music to get champagne and limousines, but it is a dream to be able to make a living doing the thing we love. There´s a lot of music to be written and so little time.”

„Greetings and gratitude to all our German fans. There is more to come and hopefully soon. Auf Wiedersehen!”