After eight whole years without a new album, it would surely be difficult for some other bands to have due attention at all. Not so but the influential Skyclad!

Because the style of the UK-group, founded in 1990, is genre-transcending and the partly illustrious line-up is well-known. After all, globally valued musicians out of cultically revered NWOBHM acts such as Blind Fury, Satan and Pariah provide the striking Heavy and Thrash part of the Folk Metal pioneers from Newcastle upon Tyne.

Now, the formation around the guitar duo Steve Ramsey and Dave Pugh is happy again to spread its accentuated nature-oriented message in all directions with the comeback work „Forward Into The Past“. 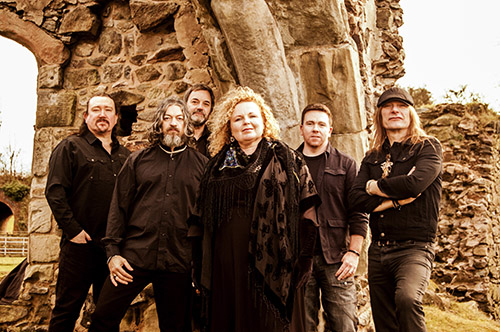 You are now under contract at the 4th, better known record label in the band's history, as it seems.

Was it hard to get the new album-deal with Listenable? And what do you think about the development in the Metal biz since the foundation of Skyclad?

„I think we have had a few more labels than that, but never mind. Working with Listenable Records largely came about because some of the guys in the band record with the band Satan; who are also signed to Listenable. They were pleased with the way Listenable did things and when we decided to record a new album Listenable offered us a deal, so the timing was great. I think that the metal market has had to adapt just the same as the rest. Record companies have been struggling for twenty years now because of the internet and have had to work out ways of making themselves relevant. They can do this by building up good communities of interest and offering exclusive packages and so on. The re-emergence of vinyl, for example, has helped this process but it is still very difficult for them. The idea that playing live can compensate doesn’t really help smaller or emerging bands.“

How do you feel, after having finished these new, surprising powerful collection of songs?

„We are very excited about it actually because it’s been a while since the last release and this one came to together so fast that we continually surprised ourselves with the recording process week by week. As you say, I think we have produced a ‘surprisingly powerful collection of songs’ and the album has some variety in the tracks.“

What is the most important thing to you today for the music with Skyclad?

„That we enjoy it, that it is interesting and that it is challenging. That’s what is important to us. Not doing the same thing as we did on the last album.“

A very own, folky kind of Metal and a specific, earthy message since 1990 - what do you think is the main recipe for the ongoing existence and the success of Skyclad?

„As above, it has to be the enjoyment of what you do, coupled with a determination to ‘do your own thing’ whatever.“

Main reason(s) for the album pause of 8 years?

„It wasn’t planned this way. We actually began working on ideas for a new album back in 2011, and some of these ideas have made it onto the new album. However, things happened, good and bad, which halted the work on new Skyclad material. The Satan albums and tours, my solo album, doing special ‘anniversary’ shows and some serious illnesses to band members all these things happened and delayed things. So we found ourselves at the beginning of 2016 at a bit of a crossroads and had to decide if and when we were going to do a new album. Fortunately, by this point Dave Pugh had rejoined the band and there was a more positive mood for doing new material and once we decided to go for it the new album came together rather quickly.“

Are you still satisfied with the songs and the success of „In the... All Together“?

„I think that for each album you have some sort of ‘game plan’ some aims you are trying to achieve. For ‚In the... All Together’ the thing was for the band – and just the five members of the band – to be able to play every song live. We achieved this in rehearsals so when we went in to record the album it was recorded really easily – in less than a week. So I would have to say that we were pleased with the album from that point of view. However, I think we could have done better with it in terms of promotion, both from the band as well as the record company.“

Be so kind and describe the main musical character of „Forward Into The Past“ with your very own words!

„The main musical character has to be ‘the storyteller’. The idea behind the album was to have ten songs with an intro, an outro and a short musical break in the middle. Each of the songs was supposed have a different ‘theme’ or story. I think we kind of stuck to this plan and it allowed for some variety in the album in terms of musical styles. There are a few ‘political’ songs as well as some folk songs and ballads and so on.“

Which musical adventure of lively ideas is waiting for the curious listeners on „Forward Into The Past“?

„Well the songs on ‘Forward Into The Past’ are broadly split into ‘big themes’ and ‘personal themes’. So the ‘big themes’ of politics (nationalism, protectionism and populism), climate change and pollution and the changing nature of the music business are all discussed in ‘State Of The Union Now’, ‘Change Is Coming’ and ‘Forward Into The Past’. While the more ‘personal themes’ of ‘Fate’ and how to respond to the world around you are discussed in ‘Starstruck?’, ‘The Measure’, ‘Words Fail Me’ and ‘Borderline’. Traditional folk song forms are employed for ‘A Heavy Price to Pay’ and ‘The Queen Of The Moors’, while ‘Last Summer’s Rain’ looks back to the youthful idealism end exuberance and asks ‘what happened?’“ 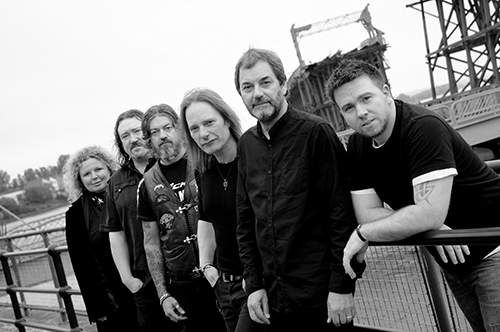 For which of your musical ideals of Skyclad does stand the new album release mainly?

„I think it has to be variety. We really don’t like to make albums were the songs all sound similar or have the same subject matter. So on this album you have songs with a folk feel, some blues, and songs with a bit of a ‘punky edge’. Songs about politics, the environment, refugees, ‘fate’, lust, the music business and so on. Variety, as they say, ‘is the spice of life’.“

How long was the songwriting in total for the new tracks of „Forward Into The Past“?

„As I mentioned earlier, we started work in 2011 but then left everything until the middle of 2016. So when we booked the studio time in September 2016 there were no songs finished. The album, therefore, was really written between August and December 2016; so about five months.“

Please tell a bit about the songwriting process itself, any highs or lows to mention?

„The songwriting process itself is fairly typical I think. Basically, someone (usually Mr Ramsey) has an idea that is recorded roughly and then it is worked on for a lyric to be added as well as other instruments and the final arrangement. The good thing is seeing a song come together in the studio as everyone contributes their parts. The difficult part, for me in any case, is getting the words to ‘fit’. It’s one thing to have a title or an idea but getting it right can be very frustrating.“

Who out of the band wrote the lion’s share of the new songs for „Forward Into The Past“ and what are his main qualities in your opinion?

„I think Mr Ramsey has to take credit here because he is ‘Mr Skyclad’ and always has been. Even though I wrote most 50 % of the material here, I think it is his dogged determination and musical restlessness and work ethic that underpins Skyclad. I think he will be planning the next album already and it won’t be the same as this one.“ 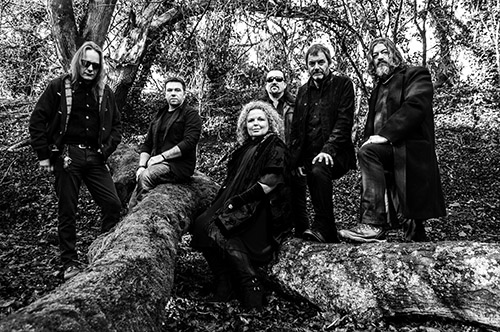 How important are catchy, playful melodies and proggy structures for the present band?

„As mentioned above, Skyclad are always looking to have some variety and diversity on their albums. This can be through instrumentation or different personal or paying attention to things such as rhythm, harmony or time signatures. It is important to us to consider the overall ‘feel’ of an album so that it’s interesting to play. If we don’t find it interesting to play, or aren’t enthusiastic about it, why should anyone else be?“

„Forward Into The Past“ - the album title is interesting to read; which concept is behind it?

„The title ‘Forward Into The Past’ was eventually chosen from a few suggestions because I felt that it summed up a lot of the thinking behind the themes of the songs and the whole process of getting Dave back into the band to play ‘boutique’ festivals, recording the album in Newcastle and getting Duncan to do the artwork again and so on; and the band agreed. One of the main intentions of the album was to return to the themes of albums from the late 80s and early 90s and reconsider them or bring them up to date to see what, if anything, has changed.“

Clearly social-critical song titles like „State Of The Union Now“, „Change Is Coming“, „A Heavy Price To Pay“ and „Words Fail Me“ speak already pretty lots about the lyrics - while others seem to praise Mother Nature. Please bring the main lyrical direction and thematic aspects of the new release closer!

„The song titles mentioned here cover politics (populism), the environment (pollution), bawdiness (lust) and writers block (or exasperation). As you can see, there isn’t one theme but a collection of topics based firmly in the Metal lexicon; but re-visited. It has perhaps a more ‘direct’ manner here but, hopefully, it is worth ‘mulling over’ or thinking about a few of the points raised.“