With the 2016 debut album „Screamworks“ the Finns were able to build a solid foundation. And Silver Bullet continued their melodic-theatrical work, which now culminates in the successor „Mooncult“.

Their crisply rhythmic thrash facet cracks ear interlocks across genres. The defining theme of the Power Metallers, founded in 2008, is horror movies, which gives the band around lead guitarist Hannes Horma a lot of material for all kinds of exciting lyrics. The main composer has gathered a very active group of profound musicians around him. 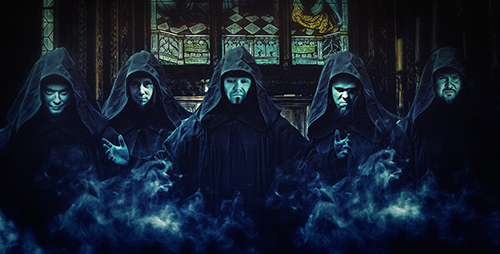 I hear refreshing virtuos music with well thought structures … have you guys already gained deeper experience in other bands?

„Yes, we have all played in bands before Silver Bullet. I played almost ten years in the Battle Metal band Turisas. I have also been in numerous other bands and cover acts. Vocalist Nils was in Dreamtale and has a lot of cover bands under his belt as well. Henri, our guitarist, was the lead singer of Symphonic Death Metal band Asa-Noir. Our drummer Patrik is also playing in Black Crucifixion. And bass player Ossi handled the low end in Blind Stare. So I would say we are pretty experienced bunch.“

A „Silver Bullet“, known as a werewolves death bringer … is there anything deeper behind the band’s name, when you think more about?

„I don't think there's anything deeper in the name. We just thought it would sound and look cool. It gives you a vibe of horror but is not tying us to anything. And I was really surprised that there was not a Metal band called Silver Bullet yet …"

Please describe the main musical character of the new release „Mooncult“ with your very own words!

„Fast and heavy but at the same time, melodic and catchy.“

What is the most important for you on the new release of Silver Bullet?

„For me the most important thing is the music itself and what kind of feelings it gives to the fans listening to it. And when doing a concept album, of course the story is really important as well.“

„Being a concept album, it has a lot of different emotions. But I think that the dominating emotion is sadness and longing for something lost.“

„I did most of the writing. We composed ‚Burn The Witch‘ together with Henri, everything else is written by me. When we released our debut album ‚Screamworks‘, I already had some ideas ready for this album. So it took about 2 years to finish.“

„To make the songs fit the story we are telling and also all the transitions to other parts and moods. I have no problem in writing riffs and melodies but to make them work together is sometimes hard on a huge project like this.“

You guys spread diverse horror stories … are there any special, theatric visions which raise in your imagination while playing the new song material?

„Hmm … I am so deep in the story that I always have images in my head when I play or listen to the songs. It's a really diverse story, so it all depends on the song. We have a sad love story, witch hunts, evil cult, Goddess Hecate and even a ship lost at storm. So it's definitely theatrical.“ 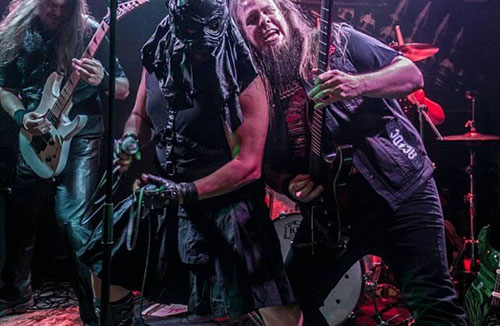 „Sure. I have a lot of influences but with this album I really wanted to bring new elements to the music of Silver Bullet. With the debut, we were more leaning towards Judas Priest and King Diamond … that old school type of Metal. But now I decided to add some influences from the bands like Blind Guardian, Rhapsody and Iced Earth in as well.“

„Mooncult" - what is behind these title?

„Mooncult is the malicious ancient cult that worships the Goddess Hecate. Their sole purpose is to find and destroy the Chalice of Secrets, that would open the gates between the shadowlands and the world of the living.“

„I think I've already done that with the other questions. But here goes … it all begins when Thomas, the main character of the story, loses his wife and son when their ship sank in a storm. Sailors blame witchcraft for the accident and so begins the North Berwick witch trials in Scotland. A lot of things go wrong and Thomas is forced to judge his own daughter Euphemia Meredith to be burned at the stakes. Eaten by the quilt, Thomas then ends his life, hoping to see his loved ones once more.“

„The line-up is solid at the moment. Ossi is now part of the band and we are already working on with the new songs and ideas. When we get together, we like to drink a few beers and listen to our favorite Metal tunes loud. I would say that we have a great chemistry in the band.“