Especially their fans of the first hour wished over the years increasingly a return to the proven musical virtues of the black metallers active since 1995.

When the French, with time rather more technical than atmospheric, 2013 „The Howling Spirit“ brought on the market, it banged as usual uncompromising in the ears - but the very certain, sacral note, it is now again with the new long-turner „La Morsure Du Christ“ by Seth so properly pestilated.

I talk to guitarist Heimoth and singer Saint Vincent.

What a powerful and dynamic return! I love it! How does it feel for you?

Heimoth: It is a very exciting time indeed, we are having awesome feedback from people around. We can’t wait to put out the whole release and see the reactions as regard the entirety of the record. People have emphasized the authenticity of the traditional Black Metal that we are providing, mentioning that it is still possible today to release a Black Metal album with genuine old-school feelings.

The sound is a pretty fine return of the good old Seth-Trademarks - who produced it? 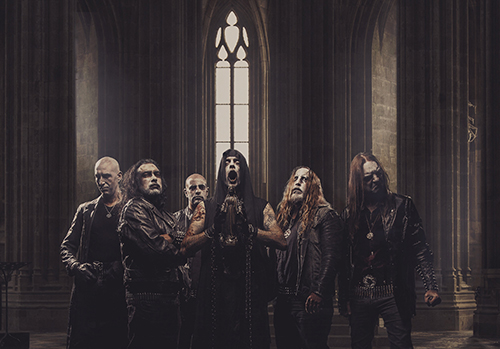 Heimoth: It was produced by Francis Caste, Studio Sainte Marthe, Paris, where many French bands do record (Loudblast, Hangman’s Chair, Svart Crown…). Since we wanted something not too old and not too modern tough choices had to be made and he was the right to do this with. The production is much thicker than old usual Black Metal stuff yet the old-school riffs we have breed a more traditional feeling to it so overall the mix is clearly not clinical unlike quite a few albums that we did release like „Era-Decay“ for instance. „La Morsure du Christ“ is clearly the best sound we have had so far as it perfectly fits in with our nineties musical approach. It was a bit of a challenge though to come up with the right balance with so many keyboards tracks and so much vocal intensity on front.

Saint Vincent: This album stands clearly as a sequel to the band's debut album „Les Blessures de l'âme”, released in 1998. So obviously it brings back the flames the band was holding back at that time, some genuine old fashioned Black Metal.

What is the most important fact for you on this new album?

Saint Vincent: That going back in the past has paradoxically proved a major step forward and not backward. This album has been created with a clear vision and everything got in shape quite naturally. The band resurrected its former essence; from my point of view it has been great to write the songs with French lyrics.

Heimoth: True, it is also noticeable how foreigners are interested in knowing more about the lyrics while people do not usually care much when these are written in English. Not sure that many listeners would have given so much of a damn if they had happened to have been English. The lyrics and vocals both add a major element to the album: the undeniable theatrical character of the record. 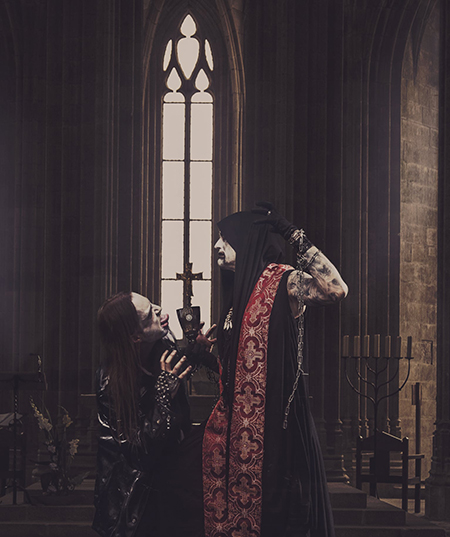 It feels excellent for me to listen to the new songs - what kind of emotions dominate the new material?

Saint Vincent: I would say that’s a blend of mixed feelings. The core of the atmosphere feeds on the classical hatred and rebellion. The weight of time through melancholia, somehow nostalgia (after all it’s the sequel of an album released 20 years ago !), that you can find in tracks like „Les Océans du Vide”, „L’Hymne au Vampire (Acte III)”. The fascination facing Notre-Dame de Paris demise („Ex-Cathedrale”) and „Sacrifice de Sang” explores more ritualistic atmospheres.

What topics do your new song texts deal with beside disgust for all the hypocrisy and falseness of the Christians?

Saint Vincent: The cover showing the Notre-Dame de Paris blaze is used as a strong symbol marking the end of an era; even if we all grew up in the demise of Christianity, this worldwide’s shocking event clearly marked a milestone in the end of spirituality in the Western World. I would not say there is disgust for Christians in the lyrics. Maybe more pity. The lyrics depict a world where their God failed to support them („La Morsure du Christ”) and left its Cathedral being destroyed and a new world of materialism rising on its ashes („Ex-Cathédrale”).Then the old soul remembers his passions („Métal Noir”), and feels melancholia in this new world it doesn’t recognize itself in it („Hymne au Vampire (Acte III)”, „Les Océans du Vide”). On the ashes of the Church, rises Lucifer as a new faith rooted in extreme liberty, deviance and abuse of the weak. („Le Triomphe de Lucifer”, „Sacrifice de Sang”).

Who wrote the lion’s share of the songs and how long was the work in total for all the material? And what have been the hardest or most difficult passages of the songwriting-process?

Heimoth: I did write the whole album in over a year. By the end of each writing process, each track was sent to the other members. These riffs are rather instinctive to me - I had to get back to the mindset I was in 23 years ago but it felt like it was yesterday. Adding keyboard lines on top of both bass and guitar layers were a bit tricky as it is something we hadn’t done for years. Our keyboard player Pierre Le Pape would send me over his ideas - they were aimed to transcend the riffs and not to mess it all up. So it took quite a while to figure out the best recipe so that the key can tell its own music-story as well over the basically written guitar parts. 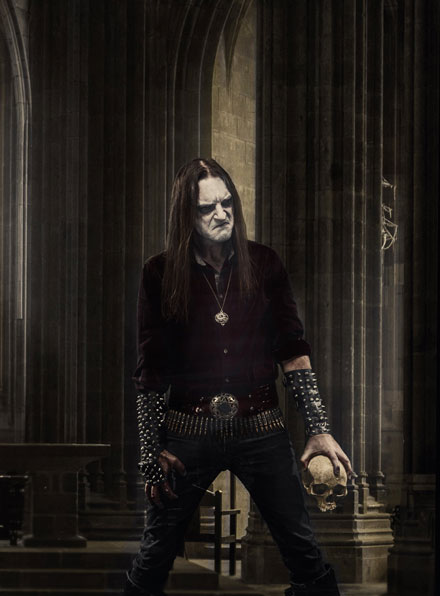 Is it allowed to ask you about any special musical influences which may have led to the new material?

Heimoth: As a sequel to „Les Blessures de l’Ame“, this new material has naturally been inspired by our first album only. What Seth has created in the beginning in terms of atmosphere has been used as a model to reignite the vitality of the past in a possibly more aggressive and slightly modern way. We have tried to capture the musical roots and lyrical themes that were our first trademark and the production as well as the new members including vocals have brought on a new touch that made this material kind of updated and thorough.

How much are you still interested in the current music world, the Rock and Metal music scene?

Heimoth: Though I wasn’t familiar with versatility when much younger, I now listen to a broad range of music going from electronic, classic or Metal. I guess I kind of feel overwhelmed by the staggering amount of Metal bands around and it is quite refreshing to get acquainted with new genres. I believe it is also quite significant to be aware of what might be going on as a music writer so you can grab solid inspiration here and there. What I listen to does not necessarily picture what I write though. It all depends on the main objectives of the writing. For this new record, what made things a little tricky was to simultaneously exhume the genuine innocence of Seth 90’s yet lessening the obvious musical naïvity of the first album.

Saint Vincent: We are impatient to be back on stage and promote the new album to bring you back some 90s Black Metal feeling to you ! Can’t wait for the insane times of the Covid 19 to be over.

Heimoth: Last time we played in Germany was for Kings Of Black Metal festival, possibly in 2015, can’t recall exactly, but we are eager to meet our German fans again!