„We had the idea to combine the different elements that make up the history of Sepultura this time“, announces singer Derrick Green about the new album „Quadra“.

The aforementioned history of the Brazilian Thrash Metal success models active since 1984 offers a respected variety of trademarks. So the 15th longplayer is full of impulsive, dynamic and brute traditional elements - but Sepultura 2020 is also convincing in terms of originality, innovation and freshness. 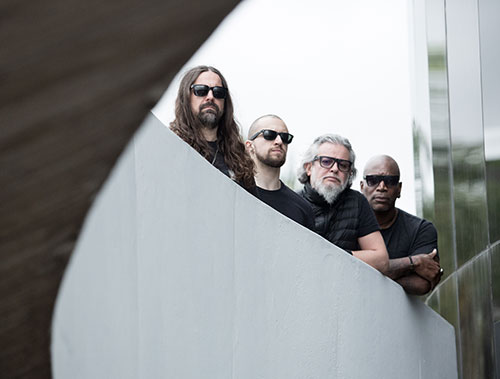 „Quadra“ unleashes an overwhelming blow from the very first minutes on - unites all worked out trademarks, Sepultura combines the old spirit well with the newer (groove-laden) playing culture. Your view about?

„Yes this was the idea to combine the different elements that make up the history of Sepultura.“

I am also positively surprised by such an striking overdose of pure power in all aspects! What made you guys such determined?

„We had such a great reaction with ‚Machine Messiah‘ and we wanted to elaborate more with ‚Quadra‘. Being together with the same line-up for sometime now also helps. Eloy is a very focused force in the band and after touring and doing two studio albums before ‚Quadra‘ helped in creating a stronger bond within the band. We dug in deep to not fear showing more of our personalities in the music.“

I hear refreshing original, emphasized dynamic and often times absolute thrilling structures … who did the lion’s share of songwriting this time?

„This time it was mostly Andreas and Eloy and I wrote the lyrics for the entire album. The guys would send ideas to me in L.A. and I would record them at home. Once it was time to work on the demos to send to Jens Bogren our producer I would go to Brazil to do this. It worked out very well, most of the ideas I had were exactly what Andreas had in mind also even being on the other side of the planet.“

„We started with ideas and the concept early in 2019. We didn't play many shows in 2019 to concentrate on the writing of ‚Quadra‘.“

„For me the most difficult part in the lyrical aspect of song writing was being able to find latin words that would fit lyrically and would flow musically. These parts would be the guide for all the choir arrangements.“ 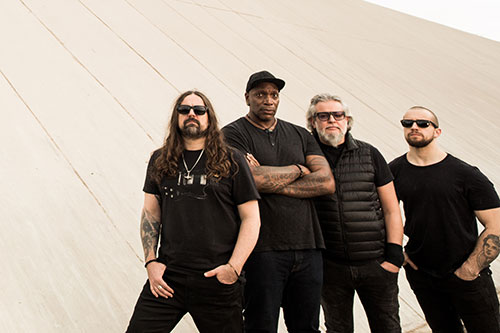 Please describe the main musical character of „Quadra“ with your very own words!

„‚Epic‘ is the best word that comes to mind. We set out to make an epic journey and I believe we did that.“

„Quadra“ is a concept album, as it was announced. Regarding the coin on the front cover and song titles as „Capital Enslavement“, it's easily to imagine that the story deals with the domination of money and mankind's dressage … what is your personal attitude towards money and wealth?

„I believe that money enslaves us all and we are all born into this idea no matter where you are in the world. You need money for shelter, food, for survival in this world and we find it hard to question. I believe it can bring the worst out of people if you let it.“

Will humanity ever be able to rise above the occult acting money elites?

„I believe people can rise above anything if we choose to do that.“

Are there aspects in that concept story that particularly concern you and can move you more than anything else of the plot?

„All believe all the parts are equally important and connected to each other.“

What kind of - intensive - emotions dominates the new songs?

„The songs are about many social topics that I believe many people can relate to or have an effect on us all:
- The dysfunctional justice system that exist in the U.S.
- Political manipulation.
- Addictions.
- Enslavement through monetary means.
- A song about the courage of Muhammad Ali, he was much more than a champion boxer but an inspiration.
- The native people that are being murdered in the amazon.
- Depression.
- Refugees.“ 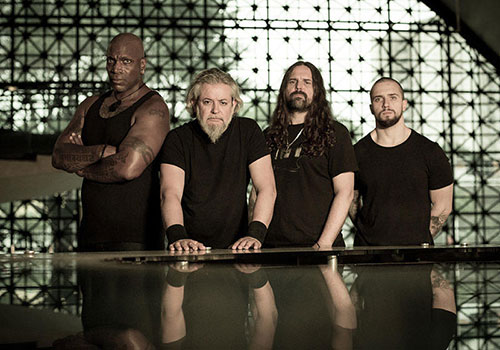 You dared to go even further with Jens Bogren this time - how long have you been working there and who drove whom more in the studio - the producer the band or even the other way around?

„We were in the studio for about 5 weeks in Stockholm and Orebro. Jens was definitely more relaxed this time. I believe it was all of us pushing each other, the self confidence was higher than ever.“

What is the most important for you on the new release of Sepultura?

„What is most important for me is for people to listen to the new release with a open mind. We are very proud of our work.“

„Guardians Of Earth“ rules! The song shows also a deeply touching epic, going to an even sacral aura - I love it, it’s is an sheer ‚earworm‘ with stunning guitar work! Is original musical variety still important to you?

„Very important and I agree the guitar work is captivating. The first time hearing it was hooked.“

Are there some songs on the album that you like best?

„It's always changing but now I would say, ‚Agony Of Defeat‘, ‚Guardians Of Earth‘, ‚Isolation‘.“

Please tell also a bit about the line-up situation and the chemistry in the band! Seems to be a unstoppable winner team!

„We are looking forward to touring the world with this album. The first tour set will be starting in March with Sacred Reich, Crowbar and Art Of Shock. You definitely don't want to miss this tour!“

„See you on the ‚Quadra‘ tour and support your local scene!“