It was recorded in the well known Swedish Studio Fredman with producer Fredrik Nordström, best known for his amazing work with bands as Arch Enemy, In Flames, Dark Tranquillity and Hammerfall, just to mention a few.

The new sound of Septic Flesh is a huge wall made from brutal guitars, with nightmarish, mesmerizing melodies while the deep low vocals of Set<'h> are combined with the cinematic style of a full choir directed from Chris A. and the glory returning dramatic voice of golden throat Natalie Rasoulis. 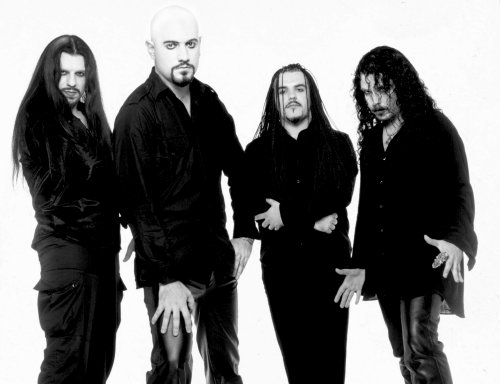 I talk to Guitarist Sotiris V. which is also clear singer and lyricist in Septic Flesh.

Why you guys leaved Holy Records after all these years of collaboration?

„After the expiration of our obligations with Holy Records, we considered very carefully the potential of the label and their next offer and compared it with the other offers we received and they were quite a lot. It was a long period of negotiations and thinking until finally we made the decision to move on. We believe that this was the best choice for the future of the band.“

How did Septic Flesh get the new contract with Hammerheart?

„We knew that Hammerheart was a growing, hard working label, with strong promotion. They seem to do the right moves, having good bands on their roster and as a result they are expanding fast. So we joined forces.“

What can you tell about Holy Records and Philippe in restrospective?

„Philippe and Severine were fans and supporters of Septic Flesh, there is no doubt about that. Even now there is a good relationship between us.“

What do you expect about the deal with Hammerheart?

„Their best effort and support. Our first impression is that they are a well organized label with ambitious plans for the future. Also they are easy to communicate with and do not try to interfere with our creativity, both very important qualities for a good relationship.“

„These words create a strong and extreme image to the mind that connected with the music becomes puzzling and bizarre. The flesh is the cloth of life but it has also an element of defect, of deterioration. If there is something that lasts in eternity it is not the form.“

Which were - and still are - the inspirations for the music of Septic Flesh? Hate, despise, and misanthropic moods?

„No. There is no hate for mankind, only for stupidity. We are inspired from the hidden side of reality, the dark mirror. There are many emotions portrayed in our music and lyrics, as many as the dimensions of the soul.“ 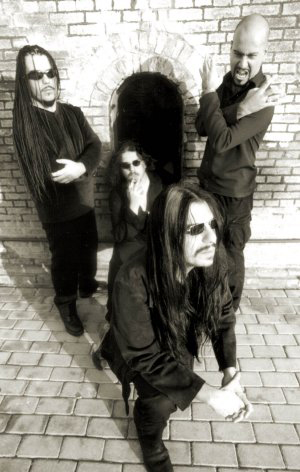 What stands behind the title of the new album „Sumerian Daemons“?

„It means Sumerian spirits of knowledge. Daemons is a word that derives from the ancient Hellenic language and had the actual meaning of the spirit in the general sense, or the expertise on maters of knowledge. I combined it with the most ancient human civilization according to many scientist, the Sumerian. If you go back to the roots you will be amazed from what you can find. The present and future is built on the past. The primordial beliefs, thoughts and knowledge inspired the next generations and the wider human populations. The names and the places changed but the story remained in most cases almost the same.“

Be so kind and explain the lyrics of a few songs on „Sumerian Daemons“ with your very own words!

„I will try to explain the meaning of some songs in few words just to give you a glimpse. On `Unbeliever` we stigmatize belief as the mental virus that destroys the potential of knowledge. In `Virtues Of The Beast` we praise the animal mind and nature, the dark lord of subconssiousness. On `Infernal Sun` we reveal the machinations of the golden `one eyed king` that rules the blind. As for the title track we tell a story of initiation to the dark Sumerian secrets.“

How much time did it take to write and work out the material including the high-quality arrangements for „Sumerian Daemons“?

„We worked over and over the material until we felt ready. We are lucky to have our own home studio and decent equipment to work with. So we tried a lot of ideas on the arrangements of the songs and kept what we liked the best. We did a rough preproduction to get a glimpse of the result and then the rest was easy. We arrived on Sweden knowing exactly what we wanted.“

Which are the deeper dark philosophies behind Septic Flesh nowadays?

„The same that we had from the begining of the band but even stronger and richer. Experience is the best teacher and an open mind is the best disciple. Our philosophy is do everything consciously and for a reason avoiding the various mind traps that lead to the `happy slave` mentality. We realize the fact that we don't now everything as no body knows everything, but the individual mind based on the order of logic is the only trusted source for the verification of knowledge.“

What special kind of moods do you wish in listeners minds while they experience your mystic art?

„We want to take our audience to a walk in the path of the twilight, following the chasm between the worlds of darkness and light, recreating the mood when the sun withdraws from the horizon, leaving the curtain open for the shining of the infinite stars.“

The band‘s logo has changed … why?

„Because the old one was not in union with the theme and atmosphere of `Sumerian Daemons`. We are very satisfied with the new logo. It is sharp and mystical.“

Who made the psychotic frontcover artwork for „Sumerian Daemons“?

„Set is again behind the artwork. As a member of the band he has the closest insight to the lyrical and musical content and that gives us ultimate freedom of expression both musically and visually. Set besides being a musician, is a painter and artist as he has studied in the Greek university of Art in Athens. He is also probably the sickest mind among the members of the band.“

Who came up with the idea for the frontcover originally, Septic Flesh or Set?

„The idea of the cover originated from Seth 's mind and was carried out from a team of FX specialists called the Alahouzos bros, under his instructions. This team constructed a special room in their studio from old church furniture, long nails , broken machine parts and fake human parts. When we entered the room for the photo shooting we felt like we were leaving in a Clive Barker's nightmare.“

At which point in your life was discovered for the first time that something in your mind and soul is pretty different to others?

„There is not a similar soul or mind to another. We are all different. On the other hand, in most cases the person feels the need to belong in a bigger or smaller group of people in order to gain recognition and the sense of the power of numbers. I am not a closed type of person but indeed I was never really interested in belonging to a wider group. In fact I felt more like an observer of the views and way of thinking of most people around me. Something indicative is the fact that although I was leaving in a Christian country I dismissed the idea of God when I was 10 years old.“

Do you reach deep inner satisfaction through playing your unique Dark Metal? Guess, for sure … but please tell about the topic with a few words!

„Our music is our mental and emotional purgatory and a physical gate to the darkest dreams of Morpheus. Step inside with your own free will.“

The new music of Septic Flesh - is it Dark Metal at all in your personal view?

„I don't like to stick to labels because they are limiting the perceptive to the small realm of their definition. You can call our music as you feel like, it doesn't matter to us. The most important is to make you feel something unique, giving a special joy to your senses. If not, then we have failed.“

In which spots in Greece are you guys mostly located?

„I live in Patras the third biggest city in size in Greece. All the other band members live in Athens. Fortunately we are not so far away from each other, just three and a half hours by car. I am happy with my residence, as it is on the outer side of the city, close to the quietness of nature. It is my private sanctuary.“

Please name a few bands which hail also from there!

„There are not many bands in my hometown. I can recall only a pop band called Raining Pleasures that have quite a success in Greece.“

Does exists a stable Metal scene there?

„Greece has a small but evolving scene. There are definitely good bands that strive to do something unique and worth the attention.“

Which are the most appreciated Metal bands there?

„The most famous bands are Rotting Christ, Nightfall and Septic Flesh. But there are also some cult bands with long presence to the underground and many good releases on their belt like Varathron and Necromantia.“

Which were your early idols out of the Black Metal scene? And which ones of them did influence Septic Flesh?

„I admired and still love to listen to bands like Bathory, Celtic Frost and Venom. From these bands probably Celtic Frost had the strongest influence to Septic Flesh due to their avant-guarde approach.“

To which bands do you listen to nowadays? Only dark and extreme Metal stuff? One don´t may think so when I listen to the new Septic Flesh album.

„You are right. We listen to a lot of different styles of music. We simply hate the happy staff, because it feels so clean and empty. We love listening to bands and composers that have many shades of gray in their music and offer something emotional and with intensity, from Metal, classical music and soundtracks to Gothic and Rock.“

What do you hate mostly on this earth?

„People that complain but do nothing.“

What is your definite goal with the music?

„Our goal is to reach the most exquisite and bizarre realms of musical pleasure.“

„After the release of `Sumerian Daemons` we will do a tour, as extensive as possible. As for now, we will enjoy the moment.“