With their very special Doom Stoner Metal, the Stockholmers make some brain waves. Thematically rooted in all kinds of occultism, black magic and ancient witchcraft, Saturnalia Temple also indulge in astronomical matters, as long as it is always mysterious, dark and fascinating enough. The new album „Gravity“ shows the band in its most hermetic appearance so far.

Founding member, songwriter, guitarist and singer Tommie Eriksson first brings the interesting background closer, which was the inspiration for the catchy band name.

„The Saturnalia festival in ancient Rome was when the world was turned upside down. The powerful and rich became beggars and the poor ruled from the throne, it was a ritualized end of the world each year. We are turning the world upside down in our temple and are working towards establishing this everywhere.“ 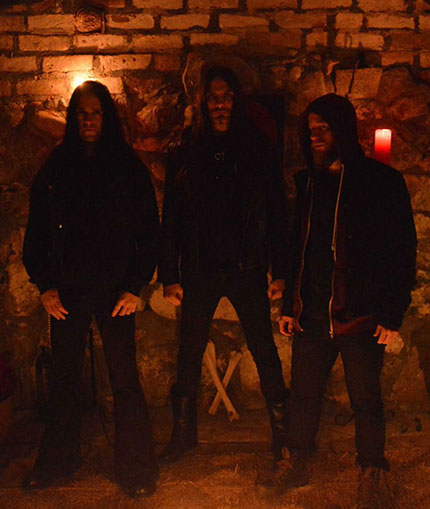 Please describe the main musical character of the new release „Gravity“ with your very own words!

„It is always hard to describe music in words without resorting to superficial comparisons and simplifications, I have reviewed records for magazines so I know the challenge. If I could make a perfect expression of the album in words I am not sure if I would bother to do the album. I once tried to describe Saturnalia Temple in a one sentence and came up with ”In a dark forest out of the body”.“

„Gravity" - what is behind these title?

„Gravity is an extremely interesting concept from many perspectives. I am here coming mainly from an esoteric and magical approach, but even science has discovered an interesting effect that gravity has on time, and we are working towards going outside of time. The more mass something has, the more gravity, and if it goes to an extreme we have a black hole which is a hole in the web of the universe and a gate to Universe B opens. We are the black hole, spiritually and musically.“

What is the most important for you on the new release?

„All our albums has taken a decisive step in a new and unexpected direction. UR had the hypnosis of the 15 minute UR track, Aion of Drakon had the delaysmitten title song which surprised and draw people to the band, To the Other had the Blues-Black Metal of the title track which was another step into the unknown. What is most important to me, is that I feel I managed to surpass this with the new title track Gravity. Here we are using tones and notes that we never heard before and it felt like really taking a step into unchartered territory.“

„All our songs and lyrics ever has been based on my 25+ years of dark spiritual initiation and magical work. The material the band releases are digested results, experiences and concepts from this Great Work. So it is not just emotions, but otherworldly experiences and states of mind beyond the mundane. So if one is spiritually open, to come into the vibration of this band is to begin a process of individuation.“

„I write 99 % of our songs and lyrics. This time however, the band was more part of the process than on for example To The Other, which led to for example songs like Between The Worlds where Peter the bassist came up with his bow experiments on the bass which starts the song.“

What have been the hardest / most difficult passages of the songwriting-process?

„I always appreciate the writing process, and since we are always allowing the time between albums to be as long as it wants, there is no stress or danger of being forced to spew out product prematurely. Since I engineer, produce and mix all our albums, it is really hard work, while also being sole guitar player and singer too. That can be a struggle. We always record in my Sitra Ahra Studio in Sweden so that is our process. The writing when I do start to get the songs down is often quick. It can be some weeks perhaps.“ 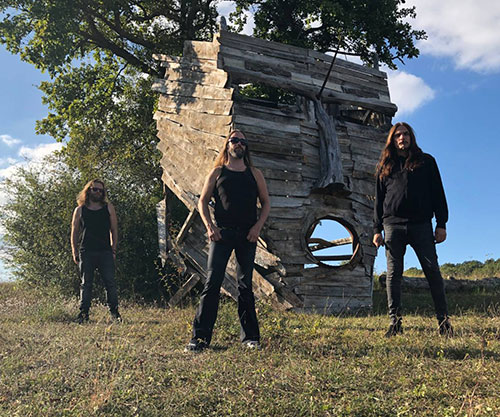 Allowed to ask you about any special musical influences which led to the new songs?

„Musically I was inspired a long time ago 80s and early 90s. Those influences are with you forever, and after I began to create music a lot myself, the influence from other bands almost ceased. Having been around like me since 1990 in bands, I have come to be inspired more from inner experiences and a need to express these. The process of becoming a musician and musical creator is a journey of finding yourself in the inner labyrinth, you understand yourself through the songs you write and you are expressing yourself in a very deep way that is at least to me on the level of prayer, ritual or depth psychology.“

Your monolithic vocals remind me often times on occult summonings to demons & devils - was it difficult for you to adapt your singing in this way to the mood of the songs?

„Thank you! I find it, thankfully, very easy to sing like myself. I am expressing certain states of mind and it all comes very naturally. If anything ever felt forced and unnatural in a bad way, I would look for another path. With this album I found new ways to sing and chant.“

The thing with the used vintage equipment is refreshing to read - please tell a bit more about!

„I have always preferred the sound of the albums from the 70s. And the best amps, guitars and pedals was made then. There are no new amps that can sound like a Laney Klipp, and if you want a guitar as good as a Japanese late 70s Aria Pro II or similar, you will need to pay thousands of euros today. The pedal market has exploded but it seems to me that many are spending more on design and cool image than on the sound. For a the general effects I am happy to use any Boss pedal board which are great. But I do have some unique old Fuzz pedals that you basically cant’ find anymore. All this aside, I am not a materialist and I do not believe you need old or expensive equipment to get your stuff done. I have used really cheap guitars as well and modern amps, live, I still got my sound. Because the sound does not come from the gear. The tone and the sound comes from your fingers and from your soul!“ 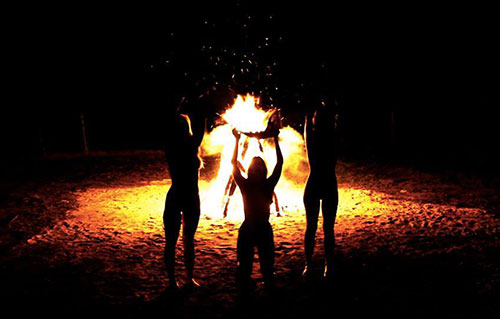 „Not that much really. Like I said, I am still discovering and re-discovering things from the classic years. And I have an extremely broad musical taste, so I am never out of things to listen to. There are though, sometimes some new band that I am impressed by of course, usually I hear it by chance at some festival or someone plays it to me. I must say I am blown away by the new Magna Carta Cartel stuff, those songs are epic and with a mind-blowing production and it really made me feel something, which is rare. Another artist I am really into, but he is a good friend too is King Dude. Reveal are friends too and a revolutionary band everybody should hear. Misthyrming has also made a great album recently.“

Please tell a bit about the line-up situation and the ‚chemistry' in the band!

„We have had this line up since Kennet Granholm on drums joined in 2013. Kennet became a full member in 2015 and this is the first album he has played on. So the line up more stable than ever and we have a great chemistry. I have known Kennet for over 20 years, and Peter has been in the band since 2008, so we are a real power trio with deep roots. I think the new album expresses this band vibe more strongly than any album before and I think we are just in the beginning of what we can do.“