With their highly respected albums „Court In The Act“ and „Suspended Sentence“, they have become one of NWOBHM's most original, most individual, and most significant representatives.

Founded in 1979, the influential formation from Newcastle broke up in 1993, but the fans kept literally iron loyalty for Satan.

Neither changed band names, rotations in the cast carousel nor other internal quarrels slowed down the loud calls for a reunion. In 2004 it was finally time - a first Satan gig after 20 years could inspire immediately! But it should take until 2011 to flare up the embers in the parties again. 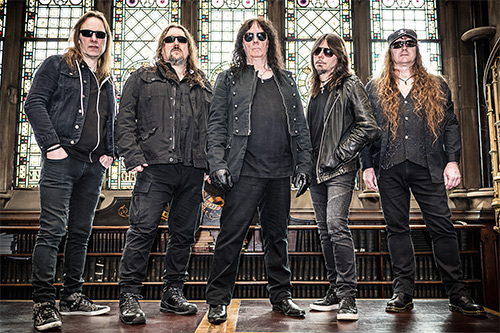 „Cruel Magic“ - how do you feel now, after having finished these new, typically Satan’ic collection of songs finally?

„I feel like now I can finally relax! Seriously, it’s been two years of non stop work - writing, rehearsing, recording, listening, evaluating, self doubt, re-writing etc - it never ends until the master tapes are handed over to the record label. Then it’s like “Oh... what the fuck am I going to do now?” I think some time away from the music now is necessary before starting to rehearse the new live show. One thing I definitely feel is excitement when I think about playing some of these songs on stage.“

„Doomsday Clock“ has become a typical, traditionally NWOBHM hit! Bounds perfectly the stable bridge from the past to the present of Satan. Your opinion?

„That seems like a reasonable description to me – thank you very much! Yes, this is the shortest song on the new album and people do say it sounds catchy, so then perfect for a 7” single. We’ve also done an official music video to accompany the song. Satan’s first ever!“

„It’s recognisably Satan! Brian’s voice, the two guitar attack – powerful Gibson on the left versus cutting Fender on the right, frantic rhythm section. As always, melody is paramount for us, both in the vocal lines and guitar lines. A song which has nothing but power chords holds no interest for me – either to perform or to listen to. Both myself and Steve (Ramsey) strive to make statements with our lead breaks without descending into guitar pornography. Now technique is very important to me but Malmsteen and all of his impersonators leave me cold, I’m sorry. As a general oversight, there is a lot of melody on ‘Cruel Magic’.“ 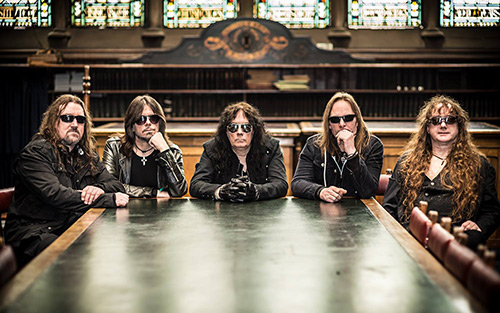 Which noteworthy - small - differences to the previous albums are waiting now for the curious listeners?

„I would say that this time, more than anything since ‘Court In The Act’ we consciously set out to make an album which simply sounds like five musicians playing in a band. So you won't hear any rhythm guitars playing behind our unison twin leads etc. No click tracks were used for drums and you can really hear the difference. We left a lot mistakes uncorrected in the basic backing tracks (drums, bass guitar and two rhythm guitars). We did overdub lead breaks and vocals afterwards but then we also did that with ‚Court ...’. There’s also a song on here called ‘Ophidian’ where we play at a slower, more controlled tempo. Not exactly doom but it is certainly a departure for us.“

What’s your very own personal view about these new album?

„I’m into it. Although I haven’t listened to it for months (and won’t do so until we begin rehearsals for the live show) I know we got it right. I think we got the balance right between considered content and impulsive performance. I think lyrically this is pretty much our best work and I’m so damn happy with how the record sounds!! The slow song I mentioned ‘Ophidian’ is my personal favourite on this record – maybe on any Satan record.“

„I have to say, some of the themes are rather dark. Speaking personally three of these songs were written at the blackest time of my life so yes, emotion has played a huge part in the composition of this music, and of course, the lyrics. The dominant emotion behind three songs I mentioned is hopelessness.“ 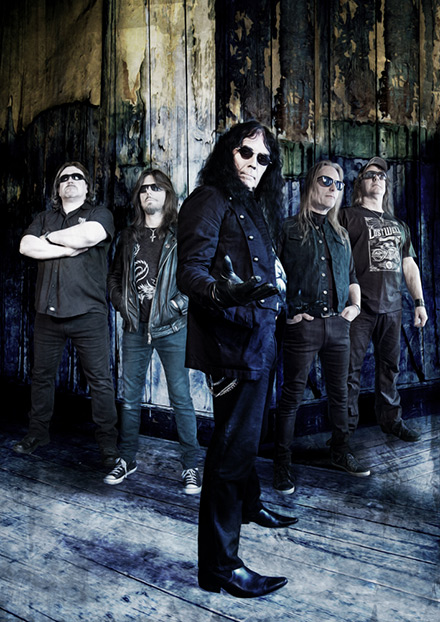 Brian’s vocals are stunning … he is one of the most outstanding singers in the whole Metal area, don’t needs no extremes at all to show passion and fervor!! I love it to hear!! Personalized individual, pleasantly unused, profoundly experienced and still high and shrill going like a siren … seems, he’s deeply in the new stuff?

„What can I say about Brian? He continues to confound everyone and defy the laws of nature. In fact I say this with not a trace of hyperbole - he is in the best form of his life. It is self evident on the new record and also on the latest Blitzkrieg release. He isn’t slowing down - to the contrary he is very much a workaholic with his music. Not only does he sing with two touring bands, he also plays the part of Alice Cooper in a musical stage show back home in England. I’m sure that is a big part of how he can still do it – the fact that he just doesn’t stop. He also defies the rulebook of being a singer in that he never complains while on tour. Never. Most singers are pain in the ass prima donnas who constantly whinge about the hotel or the food or the dressing room haha. If anyone is a prima donna in this band it’s me!“

„Anyone familiar with our work knows we never sing about the Devil except in the most abstract terms. That said, we have no interest in light-hearted subject matter either. You will never hear the words 'Rock and Roll' in a Satan song, nor any references to sex, drugs, fast cars or motorcycles. Having said that, we are still a Heavy Metal band, so what on Earth do we write about? Well, generally observations about bad things that happen in the world, or could happen. And injustice in particular, has always been a big part of what drives us to write a lyric - which is kind of how the judge character came into being. A personification of injustice in our world. It is pointedly relevant to the new artwork. Take any song off the new album, the lyric isn’t just a collection of facts or a history lesson, there is usually a point written into the words.“

„Cruel Magic“ speaks a lot of course in advance, even more is presented with the front cover art - but what is behind these title? A ‚murderous’ free-masonic conspiracy topic?

„Okay let me explain. Cruel Magic (the song) and Cruel Magic (the album title) have two different concepts if you can get your head around that. The song is describing the idea of using Witchcraft as a weapon. A means of destroying or wreaking vengeance upon an adversary. This was common practice in older times, particularly in the African form of Voodoo. Now we gave this idea to our friend, the artist Eliran Kantor and figured he would come up with something around that theme – we never suggest or tell him what to paint, he is very much an artist with his own ideas as well as his renowned drawing skill. Anyway, I half expected it to be something like, say the Judge looking like a Witch Doctor etc. But he took the two words ‘Cruel Magic’ and turned the meaning onto it’s head. So what you see on the cover is plainly a scene from Puritan times with the Judge playing the part of Witchfinder General. Yes the common theme is still Witchcraft (or magic), only that in this scenario it is the ‘Witches’ who are being subjected to cruelty. Of course most of these ‘Witches’ were innocent young women being persecuted in the name of God. If they survived the drowning pool it meant they must be a witch and they were duly burned at the stake. If they drowned then they were ‘innocent’ and given a Christian burial. I mentioned above that a lot of our subject themes are about injustice, and I cannot think of a more extreme case of justice gone wrong than these Witch Trials that actually happened three hundred years ago. That is our album concept.“ 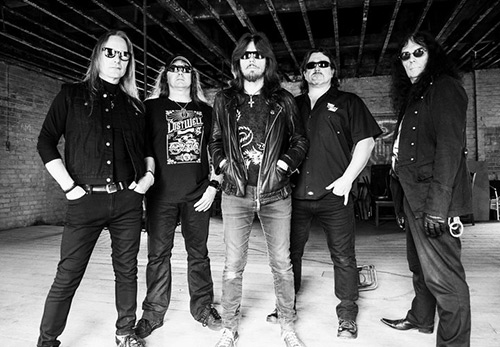 The songwriting process itself, what is to tell about in general? Any changes to the past?

„Writing is the hardest thing, where does it come from? How do you know if it's any good? Yes the way you approach performing it in the studio is important for the reasons I described earlier, but it's all for nothing without that one thing, the music itself. So no it wasn't easy and it never has been. Unlike with recording it's actually better to take your time with writing which is why we start so early. Sometimes it can take up to a year to finally realize that a song or a riff is no good. It happens. We don't record a ton of material then pick out ten songs for the record. We vet it as we go until we can't imagine it being any better. And it's not about just adding to the pile, we quite often shorten or cut out whole sections if they aren't earning their keep, so to speak. In the past we've put out successive records with only a year between. Then, say three months later you'll come up with the most amazing riff and melody which all falls into place and you're like 'Goddamn I wish we'd waited a bit longer on the last record’."

„Well, I can’t think of another Metal band that still has the original line-up from their first LP - can you? And there’s definitely a chemistry between us which is identifiable. On an individual level too. You already mentioned Brian but also I think a big part of Satan’s sound is down to our drummer Sean who learned his snare technique in a marching band when he was young. We did play a couple of Satan shows with other drummers and they had difficulty trying to replicate some of his snare patterns. It didn’t feel right without him! Also before the band reformed in 2011 he had to teach himself to play the bass drum with his left foot after an injury to his right leg. That’s pretty amazing on it’s own and the fact that he can no longer play double bass drum patterns has if anything, made him much more creative in his style and attitude. And of course myself, Steve & Graeme have been together since high school when we formed the band. Sometimes if feels like there’s almost a telepathy between us. I’m so fortunate and grateful to be in this band.“