Formed in the middle of 1992 as an initial trio, a very far and above all crack-hard musical way laid before this Singapores.

At the beginning of its activities, they named itself yet Rudhra, what flowed later in the modified band name Rudra. The sovereign composing and practiced playing exotic-troup itself calls its style respectively vocalistic easily blackened death-lead-creations as Vedic Metal, aligned according to their lyrical philosophy.

One can experience such unusual arts on the newest album „Brahmavidya: Primordial I”. Kathir, the bass player with the pitchblack hair, starts through immediately with rhetorical zest for action at the beginning of our conversation.

Hey Kathir, please tell the readers about the Metal scene of your area! 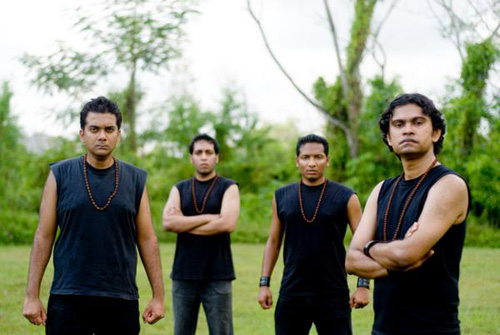 „The Singapore Metal scene is a small one with over 50 active underground Metal bands. Most of the bands play the likes of Black Metal, Death Metal, Melodic Metal etc…”

How much feedback did you get from Europe to date?

„So far it has been a few. But I believe it will increase in a matter of time now that we have good distribution in Europe through Demonzend and Cyclone Empire.”

How did you manage the contract with Demonzend? Is the collaboration with the label to praise?

„Demonzend has been a very accessible record label with Joe as its Manager. Our collaboration was something mutual and it has been a good ride so far. Our contract with them is a one album deal. We also licensed our debut album to Demonzend soon after the release of “Brahmavidya: Primordial I”. So far we have been pleased.”

Which specific circumstances and influences led to such a high-quality and chosen musical style in Rudra?

„It has got to be the ancient Vedic philosophy of Advaita Vedanta and Indian Classical/Folk music which have inspired us to do what we are doing. Both have been part of our culture as we are Indians. Ancient Indians were all Vedic peoples and the culture was alive ever since in one form or the other. We have carried that heritage all across the world without losing it in spite of many migrations. So it was not something alien to us. It has always been part of our culture.”

The new Rudra release „Brahmavidya: Primordial I” actually sounds typically Rudra, in a positive way. Your opinion to this?

„We are very pleased to know that it had its desired effect. And that’s exactly what we want to do, which is to create a unique atmosphere with Vedic Metal. I guess we have achieved that. The difference lies in the Indian music modalities that we use in our riffs and of course the Sanskrit chants.”

Which are the very best songs on the new release to your taste?

„All of us have our own favourites. My favourites are “Ananya Chaitanya“, “The Pathless Path To Knowable Unknown“, “Aham Brahmasmi“ and “Shivoham”.”

Please give a detailed description about the composing process for the new album!

„We had set the theme of “Brahmavidya: Primordial I” way before we started composing. That’s how we have worked on every album except the debut. Most of the riffs were composed at home and we bring it to the studios to put it together. We also thought of the classical arrangements as we kept practicing. So the overall idea was almost set by the time we entered the recording studio. But somehow our ideas changed as we listened to the production. It gave us new ideas too, like the Indian percussion on ‘Ageless Consciousness, I Am’. That was something that we changed in the middle of the session. Originally the song was to be different. So the album evolved as we were recording it and we let our creative juices flow without stopping it. And now you have the album in your hands.” 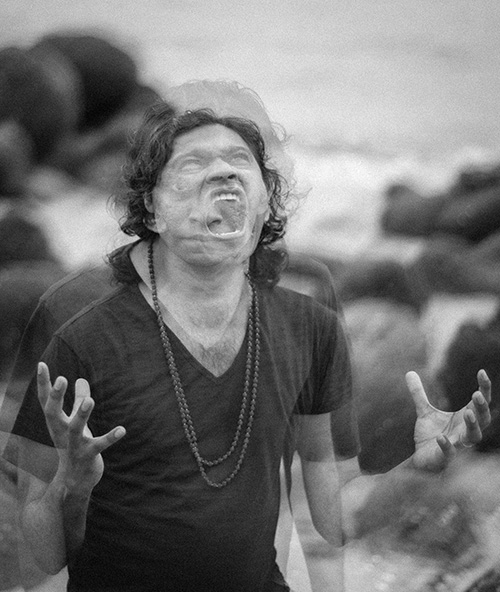 Who did all the high-class arrangements for the new output?

„That’s thanks to our hardworking and ever obliging Producers Joshua Nair and Sean Loo. They did a wonderful job on this album so much so that we have also gotten them to re-record our 2003’s “Kurukshetra” album.”

Please give a bit of information about the main lyrical contents of the songs on „Brahmavidya: Primordial I”!

„Every song in our new album is based on an Upanishad. Upanishads are Sanskrit texts which speak about philosophy. They are ancient and profound. Here is a brief outline about the lyrics:

‘Twilight Of Duality‘
This is based on the Katha Upanishad. A young boy approaches the God of Death, Yama to enquire into the mysteries of Death. After which he discovers that Death is an illusion and that the Immortality is his essence.

‘Ananya Chaitanya‘
This is based on the Ishavasya Upanishad. What exists in this Universe is One reality. The Universe is a manifestation of primordial consciousness. And that consciousness pervades every atom and therefore it is non separate (ananya) from the Self. This song was inspired by the first verse of this Upanishad.

‘The Pathless Path To The Knowable Unknown‘
This is based on the Kena Upanishad. This path to see oneself as the Universe is very subtle and therefore pathless. And it has always been unknown to everyone because of its inscrutability. I wrote this lyric with this in mind.

‘There The Sun Never Shines‘
This is based on the Mundaka Upanishad. The abode of heaven seems to be what every religious person seems to be seeking. How foolish it would be to not know that the abode of Heaven is already within oneself? In that abode the sun need not shine because it is always shining as the Consciousness. 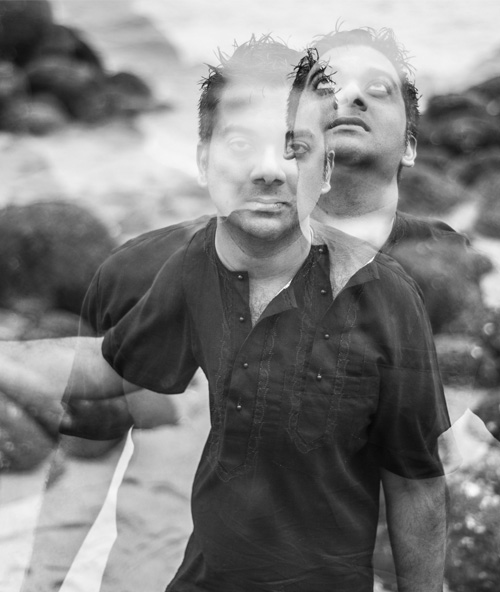 ‘Veil Of Maya‘
This is based on the Prashna Upanishad. The method of teaching this wisdom is very unique in its own way. The veil of delusion or Maya can only be removed in a particular method called negation. This song is about the method of Negation.

‘Ageless Counsciousness, I Am‘
This song is based on the Aitareya Upanishad. This song is about a man’s dejection towards the world. And his subsequent discovery of the freedom within himself.

‘Meditations On The Mahavakya‘
This song is based on the Chandogya Upanishad. It is based on a story about the teachings of a father to his son. The father teaches that knowledge about oneself is indeed unique, unlike the many subjects that people know. The song speaks about the knowledge unfolded by the father.

‘Aham Brahmasmi‘
This is based on the Brhadaranyaka Upanishad. In this case, the husband teaches his wife about ‘that which by knowing all else is known’. This song revolves around the conversation that took place between the couple.

‘Shivoham‘
This is a track based on the Taittiriya Upanishad. It was written entirely in Sanskrit. The words indicate the freedom that any person enjoys after learning this wisdom. Each word is an attribute of the self within.

‘In The Fourth Quarter: Turiya‘
This one is based on the Mandukya Upanishad. The lyrics deal with the different states everyone goes through in their lives. Here in this lyric I have shown by being faithful to the Upanishad that among the three states of Sleep, Dream and dreamless sleep, there is a fourth state which pervades the three as Consciousness.” 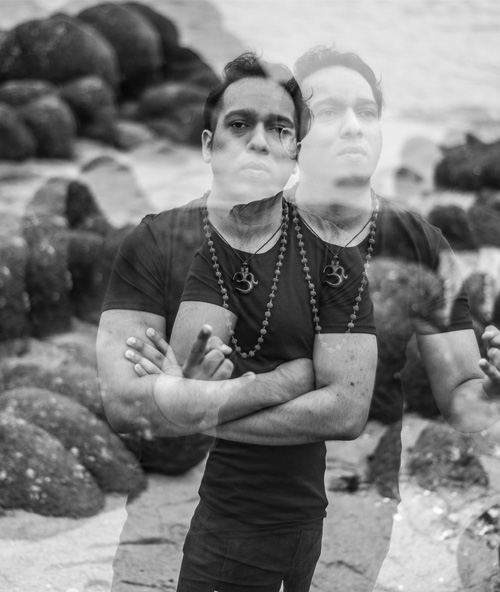 Kathir, how do you feel when you think about all the people who are listening to your songs with much joy?

„That’s the best feeling any musician can have. We are indeed honored by the fact that people like our music. We offer our salutations to them.”

Regarding Rudra‘s own style of Metal, what do you think about the works of other acts in that style?

„There is no exact equivalent. But I think Nile, The Firstborn, Orphaned Land, Melechesh share a lot with us.”

„Philosophy has always been our topic of interest. We are pretty much over Satanism, Magic, Gore and Occult for a long time now.”

What are the necessary elements which make a Rudra song a good one in your point of view?

„It has to be aggressive with the East Indian modalities, and of course lyrics about the Vedic philosophy.”

„Not really. While I appreciate all art forms, I personally do not have the interest try other things. And neither do I have the time.” 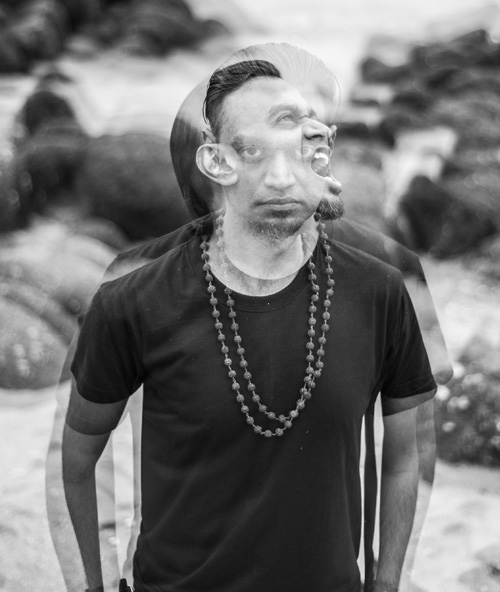 „We are very keen to experiment with an Indian Classical music Ensemble. With all the Sitars, Veenas, Tablas, Mrdanga, Flute, Violins etc… It will be really nice to do this. The challenge would be to balance heaviness and classical performance. Sometimes it gets too cheesy doing this but we would love to put out such an album without compromising on the heaviness. That’s our dream.”

Which expectations do you have in mind while thinking about the rest of 2005?

„We are looking forward to the re-release of our 2003’s Kurukshetra with a complete new arrangement. We are re-recording the album with the producers who produced “Brahmavidya: Primordial I”. We are almost done and the album has gotten a new lease of life. We are really looking forward to the response upon release. And we may be doing a US tour in August. Can’t wait to meet the American Metal audience.”

More plans for the future?

„More shows and many more albums. Ideas are oozing out of our pores but we are just too tired. We need a short break and we will be back in our studio for the next album.”

Thank you very much for this interview, Kathir. Could you please close off with your own words?

„Thanks to you, Markus, for this honour. And thanks to all who have supported the mission of Rudra.”