This title stands for the world-famous, programmatic motto of the English occultist Aleister Crowley (1875-1947), who is still widely quoted and still omnipresent. And „Do what thou wilt shall be the whole of the Law“, Rotting Christ also took this very seriously.

After all, the distinctive Death Black Metal style, which the two remaining actors meanwhile just describe as „Dark Metal“, now sounds more liberal than ever before.

I speak with pioneer and man-of-conviction in person, Sakis Tolis, vocalist, guitarist and bass player. 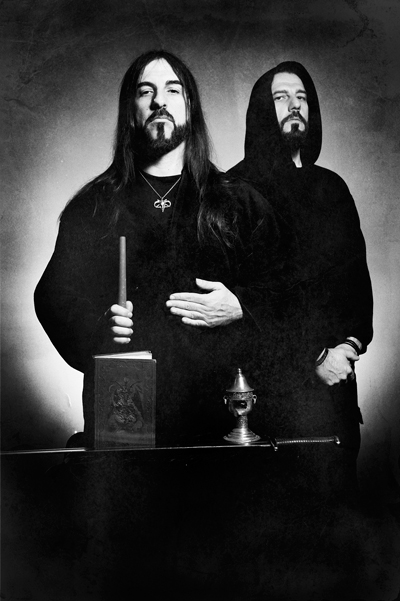 How are you doing currently?

„If I say that I am currently running the busiest time of my life, what will you say? Taking care about all the matters that have to do with the band by myself, you can understand that I have crossed the limit of a fan … unfortunately something that I am not proud to say cause I never thought that my occupation with music could not be on a fan-base, but I want to view more optimistic in the future, and to see this period just as a weird period that will pass!“

How were the main works for the new album?

„I am currently working on the tour schedule, a tour that I also take care of and will start from South America next month. Who knows where it will end. Also I am trying to spread the spirit of the new album around.“

Which noteworthy differences to the previous album release(s) of Rotting Christ are waiting now for the listeners on „Kata Ton Daimona Eaytoy“?

„Being faithful to our idea as a band, an idea that is based in refreshing our sound album by album, I feel that we also did the same with this album too … ‚Kata Ton Daimona Eaytoy’ is a trip, a journey into the knowledge of ancient civilizations, into the occultism that is rising from the dark side of each one of them. There are references from the ancient civilizations of Inkas and Mayas to the Ancient Greeks and Slavic myths, ancient languages can be heard here and there, and all these fill a multicultural puzzle that characterize this album and make it different from the previous ones.“

Who have been the main songwriter for „Kata Ton Daimona Eaytoy“ and which are his qualities in your opinion?

„I am the only composer and the creator of our new album, an album that took me more than a year to capture the idea and 4 months to give this idea a life. Really I do not know what are my qualities as an individual and as an artist - but I feel that every step I do is a result of a very deep mediation of an inner search to the deepest path of my soul in order to find out the anxieties I have and to give them a life. I consider the composition process as a really serious matter and couldn’t answer you about my quality. The thing I can ensure you, is, that you will listen soulful music. I really hope to talk to your soul with the new music that I have created.“

„I have stopped dreaming and to have expectations in my life or better said to have materialistic dreams. I do not know what is going on but I feel that my dreams are all the time compressed and disappear slowly so my only goal was to create something soulful with good quality in order to speak to someone else’s soul. Then I will feel rich … rich to my soul. That is maybe my dream!“

Please tell about the main lyrical content of the new album - one can be very curious about it, while listening to your highly intense songs with some Crowley tendencies! 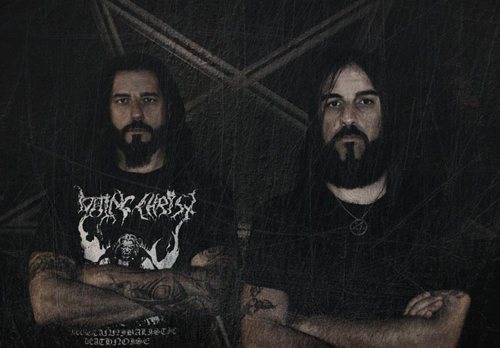 „Hmmm … I can’t say ‚Crowley tendencies‘. Due the Greek characters of the title, our album give around a free translation of ‚Kata Ton Daimona Eaytoy‘, which is pretty similar to Crowley’s motto ‚Do What Thou Wilt‘. I would like to say that this is a motto that is pretty similar to my own beliefs, but the whole album with the whole lyrical content and concept is not based on that. As I told you before the album is a trip to the ancient civilization, a journey into the occultism of the … past … a multicultural occult mosaic, I could tell.“

What’s your personal view about the ‚occult spirit‘ of „Kata Ton Daimona Eaytoy“?

„I do agree with this! There is a reincarnation of the old Rotting Christ occult spirit, a spirit that was given this time more matured and as a result of deep involvement with knowledge.“

Which special aspects are the most relevant for you in the music of Rotting Christ, within a Metal world, full of mediocre and way to much monochromatic releases?

„A creation that is true to your own spirit, and which results in a product of inner mediation. If you create music, if you create art, inspired by the extremely fast era, we are currently passing, as humanity, a kind of fast food creation, just to have an album or to get a tour or to end up the contract with your label, then unfortunately you come up with mediocre and monochromatic, as you called, releases. Who can resist to this tension? Of this crazy demand-society? This is the one, that will create something that make sense.“

Your attitude to music and to the scene itself surely hasn’t changed, or?

„The sparkly flame deep inside me, to change something in this world, maybe a kind of revolutionary spirit, is still deep inside me and make me create such extreme music. Definitely I am not that hot as in the past but I am still alive and maybe I can pass better my message now, the message of Non Serviam.“

It sounds on these new album, to be true to yourself, true to Rotting Christ, is truly your greatest love ever. Isn't it so?

„Yes is an answer that all musicians answer when they end up with a new album. I wouldn’t be diversified! I would give the feedback with an yes, even if I consider all the album I created as my children and my greatest love at their time. Keep the spirit alive!“