The ancient Hellenic deities of the underworld must be very well-disposed towards them, for the still unfathomably fierce demons of Rotting Christ are currently among the most passionate Extreme Metal hordes of Greece at all.

A period of respectable time, which is sheer unbelievable according to today's genre standards, to which guitarist and vocalist Sakis Tolis also plays a not insignificant part: he keeps his menacing hell-heap from the beginning with a firm hand together.

Already a few years ago, the indestructible dark group, as is well known, turned into an interesting stylistic direction, on which the well-proven, special mythical recipe of Black, Dark and Gothic Metal with fine Ethno elements was partly refined atmospherically. 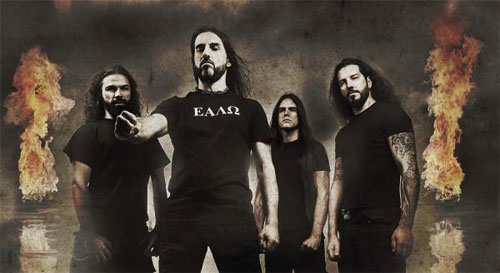 And this is also shown on the current album „Aealo“ from the most serious and exciting side. I speak with Tolis.

How developed the style of Rotting Christ over the time since the last album until the new release and under which influences?

„I am really interested in opinions from people like you, from people that follow the dark cult for decades now… It took more than three years, as with our previous album “Theogonia”. Time is passing by so fast, right? But at least it passed creative because I worked really hard in order to do a step forward. I think that I did succeed on that and I managed to create a better album than “Theogonia”, but definitely you are the one that can judge this. You can listen even more Greek elements on this album, you can listen a better produced and richer album, you can listen many unique musical elements and you can listen of course our most True Metal album ever. Even if I was considering “Theogonia” maybe our best album, I think that with “Aealo” I crossed my limits and I managed to create an even better album. Our most soulful album ever… What are you saying?“

Rotting Christ are true veterans of the Greek Black Metal scene. Which Black Metal hordes out of the time in the beginning are still active?

„Do you mean Greek bands? If yes, then I guess, all the bands of the old days still exist nowadays. Bands like Varathron, Necromantia, Zemial, Thou Art Lord. But the only problem is that they are not that active doing shows. They still release albums, really good ones, but not hanging around… And this is the only difference with Rotting Christ … that we never stopped to pouring around… for more than 2 decades now! Anyway, there is a brand new army of Greek bands that really do a remarkable job… Just write in Google 'Greek Metal Scene' … I am sure that you can find out many great bands there.“

How would you categorize your own music at all meanwhile?

„Hmmm, Metal … and you can add any synthetic in the beginning…. Metal …“

Black Metal - the most evil music to date. Accepts no fear, no authorities, no weakness. Nowadays times modern people bear more and more fears in their minds and hearts - why? What's your opinion about it?

„The system has won over us! Or they are at least a step before its victory but this is why we are here. To rise our horns in their faces and keep on producing the most rebellious morph of art… And I am talking about extreme Metal. Our dreams will be their nightmares!“

Please explain the meaning of the new frontcover artwork of „Aealo“!

„With the eyes of a warrior …“

„“Aealo” ... the transfer of the ancient Greek word ΕΑΛΩ into latin characters, which means thresh/catastrophe/destruction/the fallen, and has to do with the musical and lyrical concept of the album. “Aealo” will be the feeling after the listening of our album.“

Please tell about the main lyrical contents of the new release!

„“Aealo” is referred on the feelings of a warrior during a battle. Weird feelings, strange feelings, feelings like the feeling of anger, the feeling of fear, the feeling of grief and so many other vibrations that a warrior can have during a battle. Listening the album you will feel that you are in the middle of a battlefield and you are fighting against your feelings. No, it is not a warlike album… I think, rather the opposite. When you end up listening it, you feel relieved, you will feel like you escaped from the trials that only a war can create!“

Why you still do this kind of art at all after so many years - and what is also nowadays the most inner driving force within your creative heart to do so?

„Hmm, that’s a philosophical question. Why am I still doing this music? I guess because I am still looking for untrodden paths of my soul, because I still haven’t found solution to my dark worries, and because I am simply a rebel with a reason… not like in the old days as I was a rebel without a reason!“ 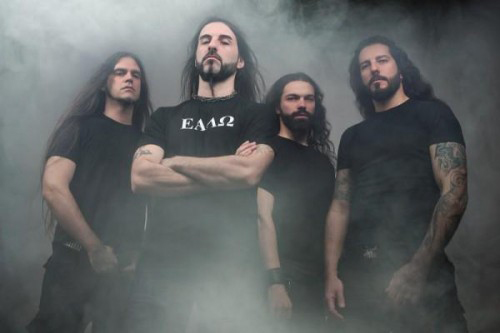 Please bring the songwriting process for „Aealo“ a bit closer!

„Much different… This time I was more based on the thoughts and less in the guitars. What do I mean is that I thought more on how the sound will sound and I didn’t grab my guitar and was expecting an idea to come by playing innumerable time. I did this because I wanted to create something different from “Theogonia”. I remember myself spending innumerable hours of thinking not only guitar riffs but bass and drums too. I was pretending that I was in a battle so I could create something that has to do with the concept of the album. I can remember about many sleepless nights, suffering sometimes for the next idea for the unique idea, but I did want to believe that in the end everything turns well. I do not know if I managed to create a better album than “Theogonia” but at least I did create something more unique.“

From where you`ve got the most creative ideas for the new song creations and when did they come at best in your mind?

„From the dark depths of my soul. From the unexplored paths of my personality. I searched a lot and I found something. This is glassed to the final project. If I ever wake up and realize that I have nothing more to say to the people I will quit with the band. I do not want to fool our fans.“

How were the studio recordings for these new album?

„We moved to the glorious mountain Olympus… the mountain of Gods in order to get the inspiration we were really seeking for the recordings. This is where the studio Lunatech is located. Did spend almost 4 months there, having a continuant spiritual touch. I think that we expressed our feelings as we really wished.“

Do you still love playing your music just like in the early days of Rotting Christ?

„Not that agony but definitely more passion than ever. Yes we still enjoy and you can see that in our eyes …“ 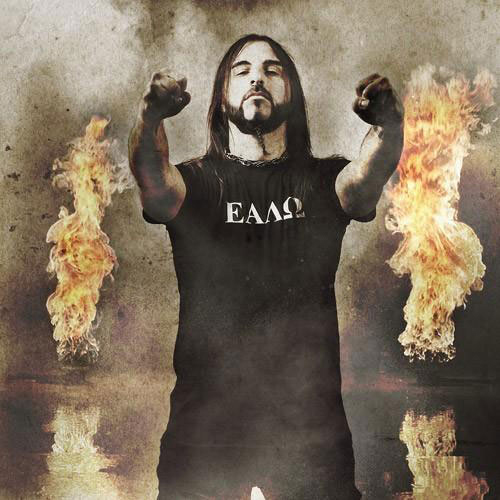 And, what do you think, why so few bands playing really authentic Black Metal nowadays - is it a question of inner views and hateful feelings?

Which are your favourite Black Metal acts?

„I stuck in the past, my friend. Stuck back to the first generation of Black Metal bands and what else than Bathory, Celtic Frost, Venom… Of course I love the era after that, but I always stuck at the first things in my life.“

Which is your preferred, typical Greek, traditional meal and booze?

„I will prefer ‚wurst mit pommes frites und eine Deutch beer mein freund‘! You know that in this life you love what you do not have!“

When you looking back to the beginning of Rotting Christ - have your musical ‚dreams‘ fulfilled over the years?

„When we formed the band back in late 80’s I do not think that we had more optimistic dreams that performing once alive. We had no money to buy a guitar and we were forced to …”steal” one. We wanted to sound like our idols back then and I think that we did it. Yes, I have fulfilled my artistic dreams but I do not hide that I am still anxious and I have many dreams to fulfill. Actually you know that without dreams you do not live, so I have discovered some…“

With which expectation(s) do you looking forward to the upcoming way of Rotting Christ?

„To get respect. As I told you before we have fulfilled most of our dreams and for what we look as a band in the future is to get respect. We do not give a shit about money or being famous but just to add our little brick on the Metal wall with our music. It is hard though but we will struggle for it.“

What's your personal view about the current Metal scene in your country?

„As I told you before - just write in Google 'Greek Metal Scene' … and you can find out really many bands that hanging around and create a really remarkable job. In Greece we currently experience a music explosion and you will feel it somehow soon. We rise our horns from Greece and look forward to meet you all of you Metal brothers and sisters!“