A damn ripe achievement in all concerns became the new and fourth studio album of this Thrash beasts out of Nippon. Their short break did them audibly good. In the beginning they have tried primarily to show lots of rough extremity. But with each year the self-loyal hammer-troop found more and more to its actual destination, namely the classic specification of this music style.

American vocal siren Damian Montgomery, acting under the pseudonym Danny Carnage, returned however from there into its homeland in the mean time, as he reports. 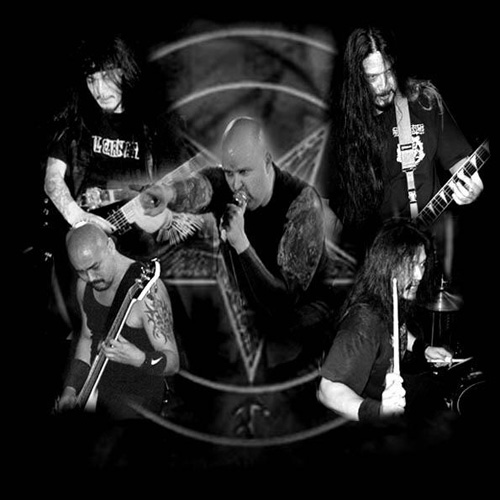 Danny, it’s good that you´re at the start again with full force ahead finally!

„Yes, thank you. When I formed this band and got signed, it was my hope that we could record an album every year/year and a half, but we are all busy with our personal life and careers and the band is unfortunately limited to "weekend warrior" status for lack of a better term.”

Which problems, regarding the band, did you go in the time after the release of the last album?

„I guess the biggest problem was me moving back to the USA. I finally went back to college full time and got my degree and got a decent job. Unfortunately all of us in the band are not getting younger and we have to plan for our future.”

Beside that, what´s mainly new to know for all the Ritual Carnage fans out there?

„We were very happy with nearly all aspects of the recording and the songs on the album. We are so excited to start working on the next album. I have wrote a few songs already for the next album.“

Which are your favorite bands nowadays?

„I listen to a variety of stuff. As far as thrash goes, I still listen to the old stuff, Forbidden, Vio-lence. I don't buy too many CD's these days. I just bought the new Bruce Dickinson. I also like Dream Theater, Vader and Symphony X. The new Death Angel was refreshing.”

How are you in these days and which expectations do you have in mind for the new album?

„It´s hard to predict. The Metal genre is so unpredictable. I always have high hopes for our albums, but due to the volatile Metal industry, and the way the writers and editors pick and choose there favorites and determine the trends, man, even a gypsy can't predict the future. At least we can say that we have and will always be a Thrash band, a very good one.”

Please tell a little about the Japanese fans of Ritual Carnage! Are thy very dedicated?

„Always so dedicated. We have played 3 shows in the last 3 years and all 3 were sold out with nearly 500 fans every night. Japanese fans love Thrash because its so accessible. Fans of Power Metal, Hardcore, Death and Black Metal fans alike find Thrash to be the perfect medium. It´s great for us.“ 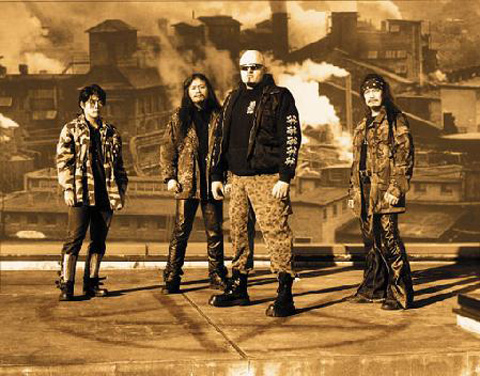 Does have Ritual Carnage most of its followers outside Japan maybe?

„I know how the CD sales are in Japan because our drummer is involved in promotion and distribution in Japan. I am not so sure of our sales in Europe. I know we have a pretty good following in Holland and some dedicated fans across Europe. Hopefully this album will give us a new chance for the European market.”

Which feelings have been gone through your mind during the composition process for the new album?

„Too many feelings. I find that writing the lyrics come to me quite easily, but the music is frustrating. Many times while writing the songs I through my guitar down and got drunk. Our new music is much more technical than our early stuff and since I am not as good Eddie or Wataru on the guitar, its easy for me to get frustrated. It´s funny, but when I wrote the 2 songs on this album, I had a pretty good buzz going to relax my nerves ... lol!”

Can you report the readers the most important facts about the new tracks?

„Most importantly was Eddie´s contribution. Eddie! Finally he contributes the most writing in comparison to our previous 3 albums. I wrote 90 % of the music on "The Highest Law" and about 80 % of "Every Nerve Alive". Eddie wrote the majority of the songs on this album. In the past Eddie only wrote 1 or 2 songs for each album. But with this release, he wrote 75 % of all the songs. In the past, Eddie had a lot of personal problems outside of the band, but he recently changed his life and focused more on the band and writing this album. I guess it should be important to notice that we did this album with only a 5,000 $ recording budget! On the last 2 albums we had a 10,000 $ budget, but with this one we had half of that due to money constraints at Osmose. I had only about 8 hours to record all my vocals! I actually recorded "Perfect Strain" and "Nether Regions" with only one take! The mix was extremely rushed into 2 days, but with budget restraints, I still think we did very good.” 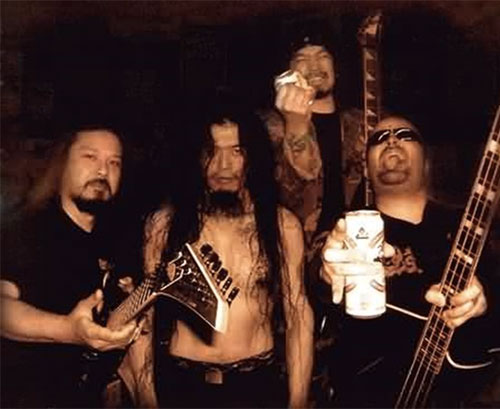 In which studio has been produced the new release and from which sound engineer?

„No producers, just us. It would be nice to have a producer though. We recorded and mixed all the instruments at Moopies Studio in Hachioji, Japan. All my vocals were recorded in Orange Park, Florida.“

How much are you personally satisfied with the final result?

„The songs, I would say about 90 %. These are definitely our best songs ever. I wish we could have had a bigger budget though. My vocals and the mix were really rushed. The guitars and bass were basically mixed with one volume. We had about 2 hours to mix each song compared to about 6 hours each song on the last album. Everyone in the band liked the rough "live" feeling of the recording, but I personally like a "tight ass mix".”

What does mean the title of the new release for you?

„We have always been Infidels in Japan and American society. We have always been against organized religion, politics and the accepted way of life. Its difficult to go into the depth of our beliefs, but if you purchase any of our CD's, upon reading the lyrics, you'll notice that we have and will always be infidels. Personally, most of my influences come from the writings of Max Stirner and Friedrich Nietzsche. Yep, I am an egoist and extremist!“

Is there any relation between the title of the album and the lyrics?

„Yes. The title song is bound to cause controversy. Its an all out declaration of war on the worlds religions. Basically, religion needs and adversary and I am, he! The lyrics are my most blasphemic ever!”

Which lyrical contents are having the new tracks?

„Most of the lyrics are based on War, Destruction and Religion. "All Too Human" is based on Nietzsche´s writings, "Axiom" is about the confusion I went through as a child growing up in a strict Christian household and how I escaped. "Perfect Strain" was based on the accessability of pathogens and chemical agents and how easy it is for terrorist to come into control of those weapons. I think that the lyrics are definitely as challenging as the music.” 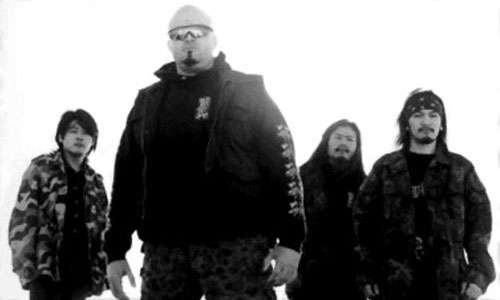 Legendary grandmaster Petagno did the front cover art - your own opinion about it?

„Well, there was not much thought or opinion behind it. I think the art has quite an impact, but we had no decisions on the art. Osmose said "here is the art we want you to use" and we said "OK". Joe is a legend and we are so happy that we could us his artwork. Joe Petagno is an awesome artist.“

Your personal view about the „modern-day” Metal scene?

„Man, what a question. I think the best thing for me was my withdrawl from the Metal industry. Its less stressful for us. I don't care about the latest trends or the reviews that writes regurgitate. I got real frustrated early on with our 1st album in relation to the music industry and the manipulation of it, so the best thing for me was to adopt a "I Don't Give A Shit" attitude about the Metal industry. We care about our fans and about the bands we are friends with. Osmose can deal with all the assholes in the industry, because If I had to, they would all be in great pain!”

Danny, some relevant plans with the band for the future to mention?

„If this album is successful, we hope to release a "Best Of" album, were we re-record our best old songs along with a couple of new ones. Kind of like Testament did. Especially I would like to re-record some songs from "Every Nerve Alive" because the recording studio completely ruined the recording and mix. I really think that was a great album which got over looked because of the sound production.”