With all their might, these two Ukrainians are struggling to transcend the limits of the human mind with the help of their music.

Quintessence Mystica was lifted from the unholy baptismal font in the summer of 2008. And the new debut album „The 5th Harmonic Of Death“ reflects, above all, the ambitions of the two, to stage their exhausting mysticism in the most individual way possible. Multi-instrumentalist, arranger and spiritualist Master Alafern even lets me look a little into the dark cards.

Please explain the meaning of the band’s name! 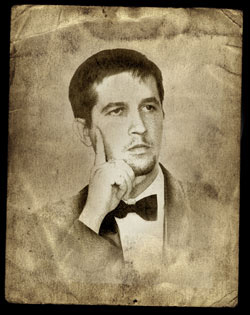 „Simply speaking it’s a Mystics of fifth element, fifth essence or if you like quintessence. But if to extend a bit esoteric base of the project, this name has more multidimensional meaning. In the basis of the first word lay the thesis of “quinta” which plays an important role in our worlds and exists in many things as well as in organic (biological) forms. It is five fundamental elements: Soil, Water, Fire, Air and Spirit. Spirit is a Symbol of Pole, it unites all these elements and “gives a breath” to their life and motion. Symbolically this can be expressed in two ways. Firstly as a pentagram with the fifth element on top or on bottom depending on the orientation of the pole. Secondly as a four-ray kolovrat with the non-movable center in the middle (it really reflects exactly five and not four elements, because the main element (Spirit) is in the center). As for second word – Mystics is all that what is beyond the Grand Edge, all that which cannot be understood with the human common sense, all that which one can feel only intuitively. Quintessence Mystica is also a dark energy, the thinnest matter, dynamic field which might change in space and time. Mystics of elementals of Universe is the entity which is far beyond the understanding of modern cosmology, and exactly this entity is responsible for bringing to our insatiable minds new questions, theories and fantasies …!“

„Our lyrics give an account of mystical aspects of various moments, matters and concepts. It somehow tries to open another, occult, side of the common concepts in various regards. The main topics are eternal questions of space and time, religion and various cults, contemplation and dynamics of free action, war and world supremacy.“

Who is the main songwriter in the band? Main lyricist?

„Creation of music in our way is a joint work. We get together and begin the Process with creating a musical basis of the track. Usually in the beginning we take some premade themes but after a while as a snow slide new and new themes/motives arise. Sometimes it works other way – the suddenly created themes make a basis for the track and premade stuff is only serves to this theme in the song. Apparently that during this fascinating and inspiring Process each of us implements his creative impulse and idea, but due to objective reasons the main part of the music is written by me. But nevertheless during the Process of arrangement Dromos can influence the atmosphere of the song with his suggestions. As the lyrics concerned the situation is the following: musical atmosphere of the track gives a tone to the lyrics, which was mainly written by Dromos. In the beginning some ideas were born for each track during the joint discussions on various interesting for us topics. Then each of us selects the tracks for which he would like to workout more detailed lyrical concept.“

In which age did you discover the grand meaning of music for yourself?

„I think that each person in very early years of his life feels the magic influenced by the sound vibrations. But unfortunately not that many people understand it and pay attention to it. Personally I started to understand it while I was 5 years old, when my parents have sent me to the musical school: this inexpressible feeling of delight when for the first time one takes the musical instrument and starts to extract first sounds. As time goes by, the understanding comes that with the help of music one can influence the reality, like it is a certain magical property of the initiated ones.“ 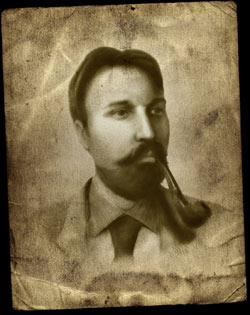 Which has been your greatest moment with Quintessence Mystica?

„The most interesting moment was the creation of the skeleton for all tracks. The most important - signing of the release deal with our label Schwarzdorn Productions. I think that much more things to come later, we have quite interesting life here.“

„Initially this project was planned to be fully a studio one, but in the future perhaps we will change this and create a live line-up. The problem is with the live show – there is no reason to play live like all other bands do because Quintessence Mystica is not only a musical project. For our concerts special theatric/ritual entourage is needed apparently with quite solid funding which we don’t have currently. Thus this idea waits for its time to appear …“

Which is still the most inner driving force within your creative heart to do such music?

„Frankly speaking we do our music firstly for ourselves because in the first place the outcome of our work has to be appreciated by us. Of course for satisfaction of our ego this outcome is brought to the public. The main target for us is not to be loved by the potential listener, but to find out which influence certain tracks make on the listeners. Its kind of experiment and we are very much interested to collect the opinions of different people. In this context the driving force is a wish to cognize the secrets and dive into the understanding of musical and conceptual influence on the surrounding reality and “unreality”.“

Your personal view about the Ukrainian Metal scene?

„I think that our Metal scene currently is quite OK in the pace of its development. Currently we have a number of interesting bands, mostly from Black Metal side of life, but also some great Speed Metal bands like Conquest. The main drawback of most of our bands is quite poor material and technical resources. And this is quite high barrier for the world supremacy by our bands.“ [laughs]

Your opinion about the Metal scene in Europe?

„I think I wouldn’t be original if I’ll say that on European Metal arena I still prefer the bands which I liked many years ago. This happens because many new bands are simply repeating each other, there is no strong fight for auditorium as it was before. Release a CD nowadays can every (even the most shitty) band, but years before it was inaccessible dream. As a result the quality of the releases decreases quite tremendously contrary to their quantity. In the modern world each crap can be sold, it is simply a matter of marketing and advertisement. Furthermore many labels prefer to sign not the most interesting and qualitative bands but the most “currently famous” ones which are pretty often not the best ones.“