Mostly influenced and inspired by their folklore, culture and history and interweaving them with epic, mighty, melancholic yet always sombre Heathen Metal, this excellent Irish band, hailing from Dublin, the capital of the Republic of Ireland, have created something intensely personal and emotive.

„Storm Before The Calm” is the fourth album by Celtic Black Metal protagonists Primordial. And once again, we've got a point: the one thing we are dealing with is simply one of the most unique, innovative, and passionated bands the Metal scene has ever seen in the last decade. 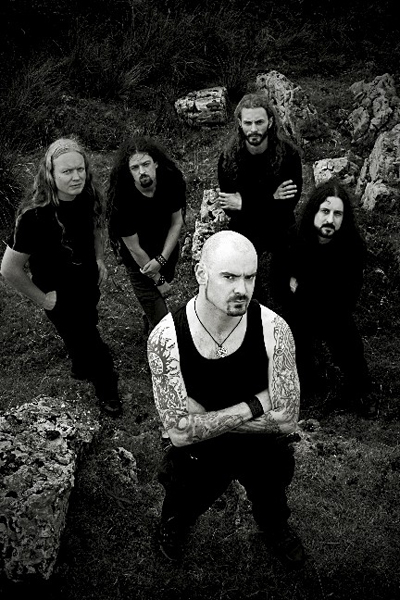 Do you know in which country Primordial have their most fanatical fans?

„I’ve met great people from everywhere who are real Primordial fans. But the countries that take to Primordial the most are Germany, Greece, Portugal, Holland, Belgium and the US among others. There are great and true people everywhere.”

In the Irish Metal scene, Primordial are surely one of the best-known and most accepted bands. What do you think about that?

„Probably, there are other bands here as well but none with the recording history we have and the longevity we have. We have been around a long time. I think by now most people will at least know the name of Primordial even if perhaps they have not heard the music. Hopefully that is something we can change from now on.”

The Primordial album „Spirit The Earth Aflame” is one of my eternal faves. The song „Gods To The Godless” enlightens my heathen heart each time anew for hours.

How is it possible for you guys, to create such timeless and brilliant music at all?

„I cannot tell you my friend, we don’t analyze too hard what we do. We just create music as and when we can and what basically comes out comes out. `Gods To The Godless` is a very special song for me and one of my favourite if not also marginally my favourite track from Primordial. When we create we are not influenced by scene trends or politics of any sort, we try and keep Primordial as natural as possible.”

The new album „Storm Before Calm” is also a great work of highly intense music, but it must more developing while the listening, to my mind. „Spirit The Earth Aflame” contains more ear-catchers in my opinion. What´s your opinion about it?

„I am not sure, when you are so close to the music it is very hard to view it as you would normally listening to music. Perhaps the new album is heavier and more direct then the last one that is true, whether or not it is more difficult to listen to I don’t know. We try and make everything as memorable as possible. All our albums are albums that grow on the listener, this music is not for everyone or instant music so perhaps in another month you will prefer this album, who knows.”

Has the whole developed in natural way - or was it a goal during the songwriting, to create not more such catchy tracks with great melodies?

„Everything is natural … like I said we don’t analyze it. We don’t think that the last album was catchier at the time or what have you, we simply just try and make the purest most emotional music we can.” 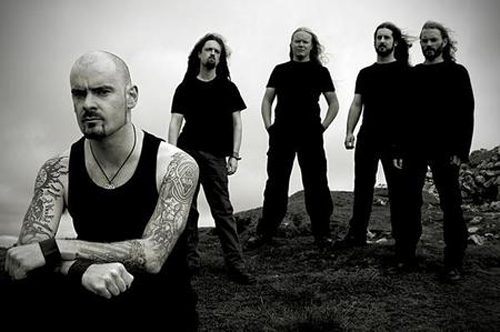 One of the first things, which come to my mind, when I hear the word Ireland, is the eternal ‚war‘ of Catholics against protestants.

Why do not all these mad street fights ever come to an end?

„It is what most people will ask about. It is what you have been seeing on the TV and reading about for years. We are an island and we have an island mentality, Ireland can be an insular place where often people do not consider themselves as part of anything such as Europe etc. Ireland’s problems are all that is concerning them. The history of the conflict goes back 800 years actually and actually goes beyond religion at this stage. It is part of peoples psychological make up. I cannot see exactly how it can be resolved, it is too deep in Irish society.”

People there hate their own neighbours in the name of religion? One may sheer cannot believe it…

„Like I said it is beyond religion. It is something so primal, so deeply rooted within our culture it is very hard to explain and also for someone outside of the country to understand.”

How much do you feel connected with ancient pagan beliefs?

„I feel connected to a time when mans relation to the elements was more natural. I am not a hopeless romantic, there are great lessons to be learnt from our history and our culture and great things there to preserve. However I take as I need and live in this age, right here, right now. This modern day fast food three minute honour-less culture I feel alien to but there are many great people and great things worth fighting for. So we must move into the future with an eye firmly fixed on the past and know our worth and place within the time line. My natural relation to the elements are reflected in the natural pantheon of the old Gods. I am them, they are me. So with that knowledge I move on…”

In which ways do you feel connected to the spiritual-shamanic sorcery of your Irish ancestors?

„Druidism interests me of course, however I often see myself in the universal context. The names my change but the language is the same … I am interested in religion in general, in forms of occultism, magic, all ancient cultures and belief systems.” 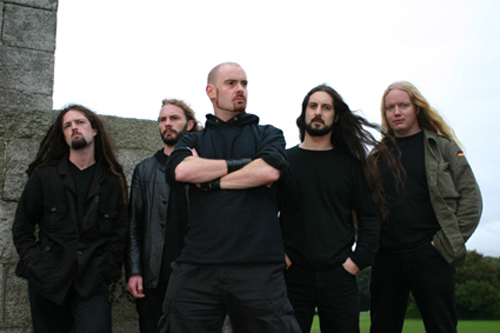 The long history of Ireland is extremely interesting for many people. Do you like, or at least do you accept movies like „Braveheart”, „Highlander” and others of such?

„I like all those Epic great films. You know I feel as moved by 'Gladiator' as 'Braveheart'. The idealism and even honourable romantic feelings expressed by these films are the underlying message, whether it be Ancient Rome or Celtic Ireland. I want to see a great Epic about Ancient Greek myth or perhaps the defeat of Greece at Carthage etc. So many things. Or perhaps Arminius defeating the Romans in the Teutoburg forest in 9 a.d.!”

Do you get sometimes inspirations for your songs from the tremendous wilderness there?

„Not in Dublin, it’s a big city but there is plenty enough of Ireland outside to inspire you!”

Regarding Irish Metal bands: please name me a few of the best ones!

Which were your early idols out of the global Metal scene?

„Idols? Well the bands I began with and grew up with I guess. Bands like Iron Maiden, Manowar, Judas Priest, Bathory, Celtic Frost, Slayer, Metallica, Megadeth, Venom, Candlemass, Holy Terror, Possessed, Mercyful Fate, W.A.S.P., Dio etc. These kind of bands are still my favourite bands after all the years. My fave bands from the Dark/Black/Death scene? Not exactly idols but over the years bands like Samael, Rotting Christ, Immortal, Darkthrone, Morbid Angel, Death, Tiamat, Nevermore etc. are bands I have really liked over the last while.”

And which ones of them have influenced Primordial?

„In the beginning it were all the bands I first mentioned and also Black Sabbath. Also Irish traditional music and classical/soundtrack music as well. And stuff like Nick Cave etc.” 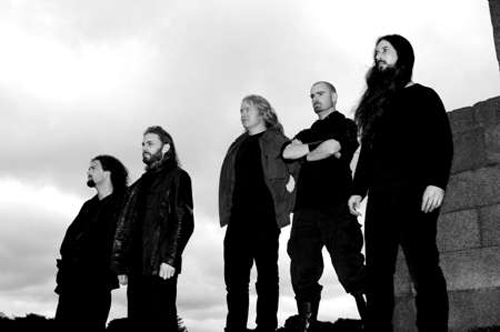 Which were and still are your main inspirations for the music of Primordial?

„Hard to pinpoint really, anything can serve as an inspiration, conscious or sub conscious. People, places, passages in time, sex, death, religion, poetry, nature, great writers etc, your beliefs, emotional responses to things… many things. I don’t really like to analyze it too hard. Just feel what the music does for you, where it takes you.” What is behind the band's name?

„It means `the time before time began`. We needed a name of course that no one had and also something that could mean something to us and also tied in with the lyrical and musical concept. I think Primordial fits well.”

„It is a challenge, a test of will power. It means you must Storm before there can be any Calm. So choose… be the eye of the storm or be swept away by it. It is cryptic and can have several other interpretations. However it states sweep away stagnation, challenge morals and re-evaluate all of them. It is a prophecy of great upheavel for the times we live in, a challenge to the status quo, a spit in the eye of those who would seek to undermine out culture and sell our past to the future.”

In which direction the music of Primordial will go?

„Who knows? It will always be Metal and will always be honest, raw, emotional and pure I can promise you only that! When that is no longer there we will disappear. However I cannot see the day in sight? Into Glory Ride my friends.”