Their new and second album „The Last Bewitchment” can be compared to Therion. Penumbra sounding like influenced by Nightwish here and there as well. But Penumbra does not sound like a copycat, and are trying to do things on a different scale.

More than another „Goth meets Metal meets Classical” kind of band, these French are mixing genres, and trying to create an hybrid, an electric symphonic orchestra, a different approach to the fury of Metal with the unbounded, hackneyed Baroque of XVIII century classical. Singer and oboist Maxime Meheust aka Jarlaath has to face some questions. 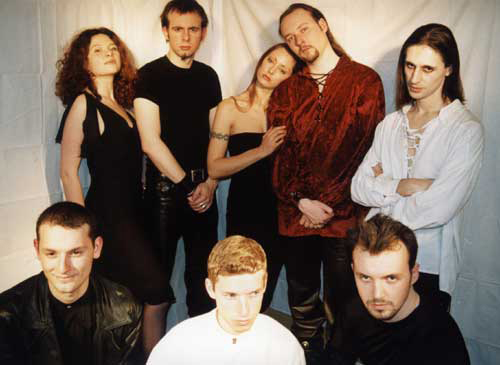 Hi Jarlaath, which way did the musicians of Penumbra come together?

„The band was founded in 1996. Dorian (guitarist) and I met during a concert. We talked about music and compared our opinions about Metal music. At that time, we were really influenced by bands like Tiamat (`Wildhoney`), Theatre of Tragedy and Celestial Season. We wanted to generate a band, which could mix all those kinds of metals with classical music, seizing the opportunity that I was playing oboe. Thus was born Penumbra which was progressively rejoined by other musicians, henceforth irreplaceable, who are now the core of the band. Now I remember our first rehearsal, we all looked at each other and we could `read` in everyone’s eyes `that’s it`, this is what we feel ion our guts and what we really want to play.”

From which city do you guys come?

„We all come from Paris, and to be honest, this makes things easier. Paris is the most active French town for the Metal scene. Bands get the opportunity to play gigs rather easily, to get known by the public and get better at the same time, by performing.”

What is the reason for the two years of album release pause? Only about Serenades Records, which promised much … and held sheer nothing?

„We do not want to hear the name of this fucking label anymore. It’s not just about promises that were given but simply about respect of the contract. We did not earn anything whereas we paid the recording! This is called robbery and we won’t leave it like that. This for sure slackened the evolution of the band as we had to find another label, big enough to fulfil our expectations. This is done now and we are back with this second album.” 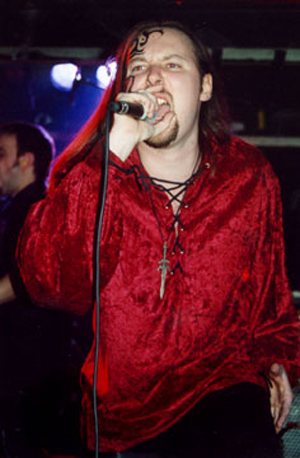 French Black/Gothic Metal bands did enter a little more of the world’s scene in the younger past. Which Metal bands are the best from France to your mind at the moment?

„Bands such as Misanthrope, Anorexia Nervosa and Sup are already famous. Others like Symbiosis, Dying Tears, Akin and many others are just waiting to explose, and they will probably do it. The French scene is in full mutation nowadays. French bands finally understood that they had to have their own style and not trying to copy other foreign bands. What is missing in France is a band with an international dimension. Who knows, maybe us!?”

Which were your early idols out of the Metal area? Which ones did influence your band and still do so?

„Most of us have been listening to Metal for such a long time that I wonder now if we used to listen to anything else before! Of course, due to our apprenticeship in conservatory started when we were young, classical music is amongst our influences. We also still listen to bands like Dire Straits or Pink Floyd for the atmosphere they bring. Celtic music is also important for us.”

In which role does Jarlaath see Penumbra within thousands of competing genre bands?

„We really attempt to find a symbiosis between all kinds of Metal (Gothic, Black, Heavy, Doom…) and classical music. Penumbra’s music is the alchemy of all those styles and is not only based on the antagonism between female voices and Metal voice. I think that most of the bands merely follow up this antagonism: Penumbra’s work goes further.”

To my ears your music is fascinating and unique! Your opinion about Penumbra‘s art of sound? „Of course we think that too! However is our judgement really objective? Penumbra is our `child` and according to us it is the most beautiful one and the only one! Anyway, your opinion really touches us.”

Wherein do you see the different points of style and the way of composing between your debut „Emanate” and the new album?

„For `The Last Bewitchment`, arrangements were particularly elaborated and worked. When we were composing, we knew that we would use real violins on some tracks and an important choir (8 persons), which was not the case on `Emanate`. The way of composing is rather different now, simply because we have to avoid superposition too many elements at the same time in order to let each instrument express itself. Of course, there are some similitude with `Emanate`, for instance we want all tracks to be different from each other, we’ll always keep this objective.” 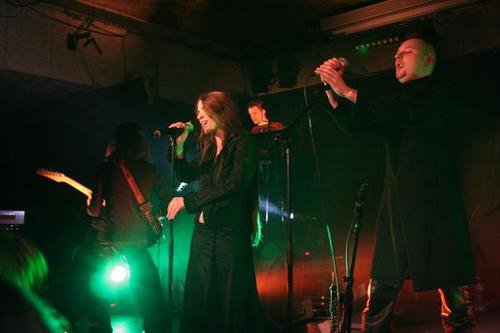 Do you agree with all the made comparisons to Tristania, Therion and Nightwish?

„Of course Penumbra is different from those bands even thought there are common points between us and them. However we are aware that there has to be some references for those who do not know us. So, we accept that comparison which, I must admit, is flattering. However, if one day, they listen to our music, they will see that Penumbra is Penumbra and not a pale copy of the bands you mentioned earlier.”

Surely it was very difficult to work with the session musicians until all was done perfect. Hard work?

„Thanks to the contacts we have in the music industry, we got the opportunity to work with professionals. The sound recordings with session musicians were done rather quickly and in good conditions. In fact, song writings took more time and were more tiresome. And then sometimes, something magic happens : they have an idea and they improvise something and at this time we think `that’s what was missing`. For a musician, this sort of event is unforgettable.” 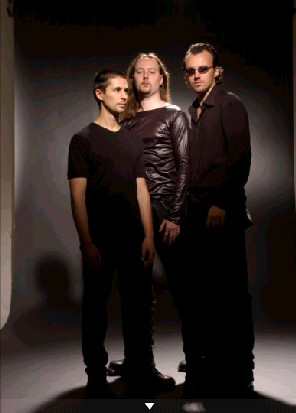 Where do you got all the brilliant session musicians?

„Most of them come from conservatory where they teach music or are finishing they musical courses. Some members from Penumbra work in the `sound` sector, which makes contacts with professionals easier. This gives us the chance to work with very good musicians for a reasonable budget. If this was not the case, the budget for `The Last Bewitchment` would have literally been blown up!”

Do they love your music as much as you?

„Some of them, yes because lots of musicians like Metal due to similitude with classical music; and some not because they think that it is too violent but they do it with regards to us.”

How is to understand your band name at all?

„In French, `la pénombre` (semi-darkness) means the mix between brightness and absence of light. It’s not possible to know which one has the upper hand on the other: sometimes one, sometimes, the other. To my opinion I think that this name stick really well with our music.”

And where these name comes from?

„This is a name with Latin origin which is very important for us as French is a Latin language. We really wanted a band name which could symbolise cultural origins of France.”

What means the title of the new album and which meaning stands behind the frontcover artwork?

„The cover represents a woman with a fallen angel. Read the texts and you will understand…”

Be so kind and explain the main content of the songs on your new album a little.

„`The Last Bewitchment` is a conceptual album. All the songs, and then the texts, follow a specific order. It is the story of an angel who decide to go on Earth. There, he falls in love with a woman, which makes his angel brothers really angry. Regarding the rest of the story, you will have to read it… Let’s leave a bit of mystery! This album should be the first one of a trilogy.” 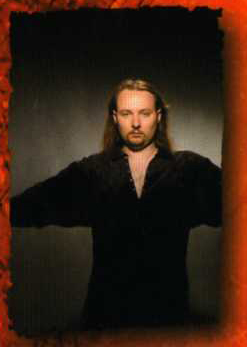 What are the main inspirations for the music of Penumbra to date?

„Of course, classical music (Ludwig van Beethoven, Wolfgang Amadeus Mozart, Joseph Haydn, Richard Strauss…), literature (science fictions, heroic fantasy) are for us some sources of our inspiration, however they do not totally come from art in general. They also come from our reflections about life, the way we live it, or the life we would like to have… It is one of the reasons why we create this world around Penumbra. It also describes our frustrations, our desires, our fears… Actually, this is what music is supposed to do and why it was created.”

What is your definite goal with the band?

„We do not have artistic goals, in this literal term. You know, the paradox of music is that a time comes where you have to record it whearas a song endlessely changes. So how can man get an artistic goal when you have this feeling? We only write songs that reflect our feelings at a specific moment of our life. I can’t tell you now how we’ll feel for our next song writing. This would be pure utopy! Leaving those considerations, there are some things that we want to avoid, like becoming a mealy-mouthed and insipid band.”

„Yes, we’ll be on the French tour with Within Temptation, playing in the most important towns. This tour is really important for us because for our first album, there was not a lot of promotion in France. So we still have some persons to conquer and we really intend to do it. This tour will give us the opportunity to do it in very good conditions.”

„For the time being, we exclusively devote ourselves on the promotion of our second album. Then, depending on the impact of our album, we’ll see what we’ll do then but believe me, we already have lots of ideas ! For the moment: Carpe diem… We also hope to do lots of concerts with this release because it is on stage that we really enjoy ourselves.”