With their sixth album „All Is One“, the Israeli grand masters of Oriental Folk Metal are easily able to seduce the masses in many cultures.

Because the music on this new masterpiece stands apart from its immense and timeless quality also by an exhilarating noble aesthetics, as only very few have so to offer. „All Is One“ shows the „Middle Eastern Folk Metal“ of the formation at the highest level so far.

The current anthems to the unique Oriental beauty running out in a positive sense, with which the Hebrew-five around singer Kobi Farhi now surpasses himself, so to speak. I talk to Kobi.

Please describe the main musical character of the new album „All Is One“!

„I think this is the most ambitious album we ever made, probably our best yet to date in all terms, sound, arrangements, vocals, lyrics etc. We had the ability to record for the first time outside of Israel so the album was actually recorded in 3 countries: Israel, Turkey and mainly in Sweden (with Jens Bogren), we also had the budget this time to do almost anything we wanted so we took a choir of 25 singers, a list of strings players from Turkey and the result are just amazing – we truly think this is one of the most original and unique albums in the Metal scene of todays.“

What’s your very own personal view inside the ‚artistic spirit‘ of the new album release?

„I am from Israel, and the Middle East, this place is suffering from conflicts and wars, children are dying here or raised to be soldiers while our politicians and religious leaders don't succeed (or even want) to create a better world for us. In a way, I'm privileged to be a musician in these lands as music is a tool of bringing people together with hope, and that’s what we do actually, I truly think our album is a spiritual manifest of the Middle East's bloody reality of the last decades. The result is amazing, despite being Israeli Jews, we are followed by lots of Arab Muslims as they see us as their own band too! I guess I can proudly declare to all the Metal heads around the world that Metal music succeeded to bring people together in the Middle East more than anything else.“ 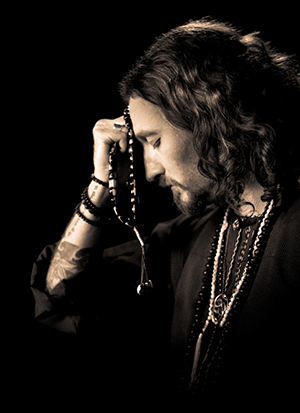 You've reached it meanwhile to create with the band a very own sound in a extremely wide manner. Did that develop in fully natural and individual manner ?

„Yes. Unlike bands from Europe or USA we come from a different place, with different stories and reality, so it's easy for us to transform that into music, and the result is unique enough as there aren't many bands who come from our region, it’s good for us as our sound stands out!“

Without growls/grunts on „All Is One“ you'll reach now far more people with your songs as it was ever before the case. This is now music for spiritually open minded masses, so to speak. Your opinion?

„We never wrote music in a way of wanting to be popular or reaching a huge amount of people, with 'All is One" it felt right to leave the growls behind (Though I do growl on the angriest song on the album – "Fail") as I felt that my clean vocals can hold the album in a strong way the way it is, and that was a great opportunity for me to take my vocals to anywhere I want, and so I did, it is definitely my best vocals ever. I do love growls and I might come and use them again in the future. I was actually very nervous thinking how our traditional fans will accept this new move, but when we create music we first follow our hearts, and never follow expectations, we expect our fans to trust us, and hopefully this new album will bring us a lot of new fans, time will tell.“

Which other noteworthy differences to the previous album(s) of Orphaned Land are waiting now for the curious listeners?

„The use of the big choir and violins is definitely strong in this album; the music is still heavy, still progressive however things have become even more melodic this time and the songs have turned to be shorter. Our lyrics in the previous albums were very complex and hard to remember, this time the lyrics are still very strong, however it will be easier to remember and to sing them easily. The main issue is that we write songs for 22 years now, the topics remained the same as they were in the past, but we always try to be stronger and stronger, and I think we succeeded to do it this time.“

What is there to tell about the graphic art of the new album?

„We are huge fans of Valnoir and the work he did with Morbid Angel, Paradise Lost and more. Though his works are very dark and diabolic, it was a challenge for both of us to work. I had to explain him at first that we are not religious missionaries or a White Metal band and that we do use a lot of religions motives as we are from the holy land, these things are a very strong influence on our lives and reality, though if you will read our lyrics you will find a lot of criticism towards religions, we just do it in our own way and that is not Black Metal, but Oriental Metal. He was convinced and the result is just perfect! When he told me he will use the motives of the 3 Abrahamic religions into a one logo/symbol I thought it is an expected move and a cliché, but once we saw the result we immediately fell for it. It's just important for me to say two things – the album title is "All Is One" however ironically it deals with the fact that we always fail to see it. The album's cover contains the religions signs, but we are far from being pro-religion, I will suggest people should dive into the lyrics of the album, they will have a very deep journey into the sands of the Middle East.“ 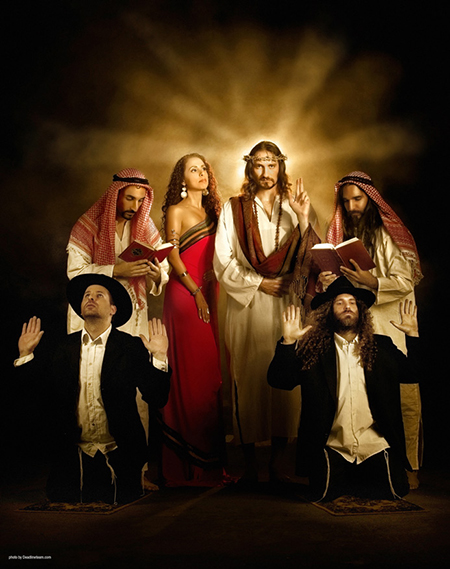 Are there any special musical influences that have been processed in your latest, very diverse hymns, to mention?

„It's a mix of Middle Eastern music (Turkish, Greek, Jewish, Arabic) with Metal, our big musical love. Add to that the life in our lands and that's Orphaned Land, it'll be a shame to include here some names as the list is very long, very long. But life and reality of our region are to be our biggest influence.“

On this new album, more than ever, it seems as if the band had become quite romantic and is now dedicated to the giant beauty of ancient Middle Eastern cultures. What is your personal view to that?

„"All Is One" was written while dancing on tables or having tears in our eyes, in our region feelings are always shown and they are extreme, as we live in a hot place, so is our personality and feelings, so happiness is a true joyful party, while sadness is always tragic more than anything. I think these are easily to be found in our new album, for us it's natural as we are Middle Eastern, for people in Europe I suppose this should be fascinating!“

Be so kind and tell a bit about the main lyrical content of „All Is One“!

„"All Is One"'s lyrics are mainly about the tragedies of our lives, tragedies that brought and still brings us to kill each other, we talk about the lack of education, the brainwash of media, politicians, religious leaders (The song "Fail") and the result of it – that children are dying (check the song "Children") and the ones that don't they grow up to be soldiers and to continue the fighting of this wars forever and ever. We deal with the fact that historically, the Jews and the Arabs are brothers, both descendants of Abraham and we touch that mainly in the song "Brother" (some kind of a letter that Yitzhak is writing to Ishmael) or the song right after it "Let The Truce Be Known" (About two enemy soldiers that become friends after they discovered they know and love the same song, however when they met again in the battlefield they killed each other before noticed) we also deal with the fact that for thousands of years people wait for some Messiah and keep on praying and praying and nothing is really changed (songs "The Simple Man" & "Our Own Messiah“)“

What is behind the title of the new release - does it mean, behind all big religions on these world stands one in the end?

„My band mates and me, we are the most popular Israelis in the Arab Muslim world, despite all political conflicts, we have learned from our band and fans more than we ever studied from religion, the media, school or our leaders. We titled the album "All Is One" but the truth is that we sing about the ways that we always fail to see this. We always divide, and we are moved by a lot of stereotypes. So the album title says a simple truth that we simply cannot translate into our lives and therefore we kill each other again, and again, and again…“ 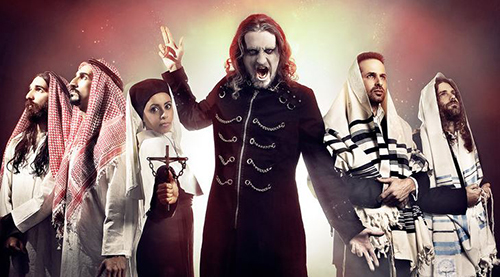 „We wanted everything to be stronger and stronger, we have to feel with each album we do that it was our best so far. We are perfectionists and in the past it took us 6 years to compose an album, our main goal was to be better but also faster, I guess we succeeded. My biggest hope is that the Metal people in Europe will give a serious chance to our music, cause it's fresh, something else, new, that they must check.“

How long did you need for the complete songwriting of „All Is One“?

„It took us 2 years to write and compose it. In Orphaned Land we all share the composition process and don't have 1 mastermind in the band like many other bands. We believe it's better this way, one thing you can notice with Orphaned Land – you can never find really similar songs, every song is always different than the other song.“

Some own words still to the Orphaned Land fans and all other open minded music fans out there?

„It is the time for Oriental Metal to take over, this music unites enemies in the Middle East, this is a living miracle of music, support us! And see you all on the roads this fall, check our tour dates at www.orphaned-land.com - Shalom from the Holy/Orphaned Land!“