Even on their latest joint escape of reality, these Finns overcome all known borders by means of completely sprawling cosmic visions.

And this is what Oranssi Pazuzu is doing, not just by musical means. The evil penetrating trip is completely disturbing.

It is, therefore, almost advisable in the experience of „Valonielu“, to have intimately familiar, spiritual assistance aside.

The mix, psychedelic in every respect, of the manic, experimentally addicted, Scandinavian Black Metal hippies on this third album is anything but a ‚light‘ diet, despite the fact that Spacerock cross-references were introduced.

Bass player and lyricist Ontto answers as calmly as clear.

Many people say ‚the third album is the most important‘ for any band. Your opinion about? 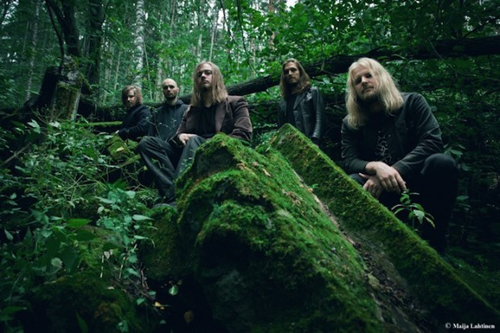 „I think that every band has it’s own way and there are many possible paths for evolution. But it’s true that with many bands the third album is important, because the band has had time to finalize and expand their vision, and learn about songwriting as a collective, recording, etc. Also, at that point they might still have some fresh viewpoints to their music, instead of just repeating the same pattern. But also many bands have a perfected a style right on the first album, take King Crimson’s or Ulver’s debuts for example.“

The new material of Oranssi Pazuzu sounds very complex; what do you think about it?

„If you compare it to our earlier albums, I think ‚Valonielu‘ is at the same time more direct and more proggy. There are a lot of straight shooting space rock stuff with emphasis on the keyboard soundscapes and guitar riffs. But also we have mixed more jamming in there and a couple of the songs are pretty long. That gives you more chances to dwell in different atmospheres, and we’re always been very much into atmospheres. I think it’s an album that captures many of our ideas well and deepens the fusion between different elements.“

Are any noteworthy differences to hear on the new output to the two previous ones?

„I think this album has born from evolution of the same basic elements, but the life form is different, maybe even a new one. Also, you can definitely hear the use of a professional studio and the production quality of Jaime Gomez Arellano, with whom we were fortunate enough to work. The recording of the basic tracks was done live, like on the two last ones, but this time Gomez also urged us to do many overdubs and that had a big impact in widening the soundspace of the album. We had an organic ground, but also many layers on top of it, and that made the album sound more colorful in my opinion. Also the songwriting was a bit more relaxed this time, we didn’t hurry things up, we just let the songs, the atmospheres and the grooves slowly evolve to the point that felt natural.“ 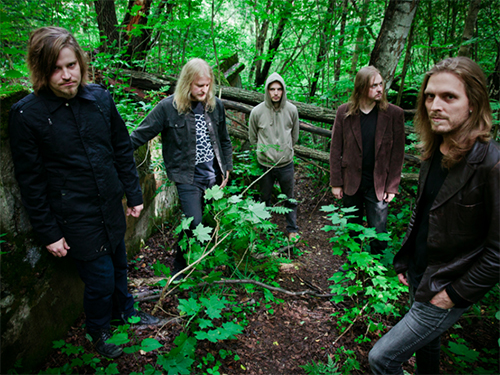 Which special visions raising in your mind while playing the new song material?

„We were talking with the guys a lot about taking the music down to the microcosmos level of life, away from outer space and into the bacterial environment. That is something that shaped our minds when we wrote the new stuff. Evolution and life’s unity was a big inspiration, for example. Lyrically, it became a study of human mind and it’s collision with the reality.“

From where came all of these new unexpected ideas for „Valonielu“?

„From exploring music and the nature with an open mind.“

How one can imagine the songwriting of you guys?

„Well, usually first we have an idea, it’s kind of the spine of the song. It can be either a concrete or a more abstract idea. Then we let this twisted schizophrenic guy called Pazuzu just mutilate it as long as it feels appropriate. In his mind there are five pictures of the song, and during time they slowly start to resemble one another and finally something that one might call a piece of music. It’s a painful and fun collective process.“

Is it allowed to ask about special musical influences in the newest songs of Oranssi Pazuzu?

„Basically we think of ourselves as a fusion band. I wouldn’t say that we’re actually a Black Metal band, but something that is a cross-breed of many different species. Black Metal is definitely a part of that, but it’s the dark background to many things, don’t take it too literally. We are influenced by many bands, 70’s Progressive Rock, Black and Doom Metal, electronic music, but no one particular band is influenced this album that directly. It’s more like a product of the music’s natural evolution.“

How long took the songwriting in total for the new release? 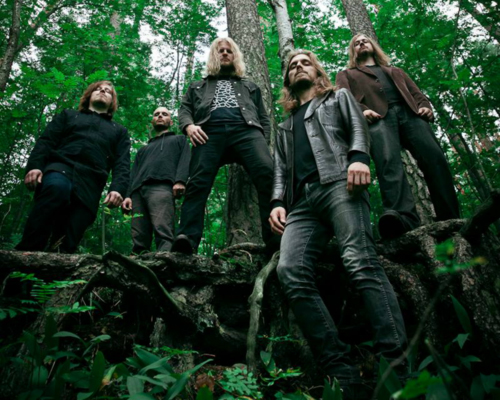 „Luckily we didn’t have much hurry with it, some of the basic ideas are pretty old, maybe from late 2011. We tried lots of different things and then stuck with those that felt the most inspiring to us.“

Be so kind and bring the lyrical main content of „Valonielu“ closer!

„There are a couple of lyrical themes, involving evolution and religion for example, but the main one that in my mind connects them all is about human consciousness and it’s difficulties in dealing with mystery. In my view, the reality is a very mystical entity. We can gain understanding from it through empiricism, but since we’re pretty limited in our abilities, there will always be some parts of reality that will be covered in the darkness. Holes in the landscape, like one song title puts it. The human reaction to these holes is usually fear, and we try to hide from the holes by constructing illusions that pretend they explain the mystical areas. But illusions have downsides, they can cloud our perception of the reality and make us dismiss all the information that doesn’t fit in the illusion’s world view. When a person confronts something that does that, the brain might go to a state called cognitive dissonance, which lures you in denying the things you see around you. This is something in common with us all, and it’s also something that makes me question certain claims about absolute truths in life. The greatest truth after all is the fundamental mystery of it.“